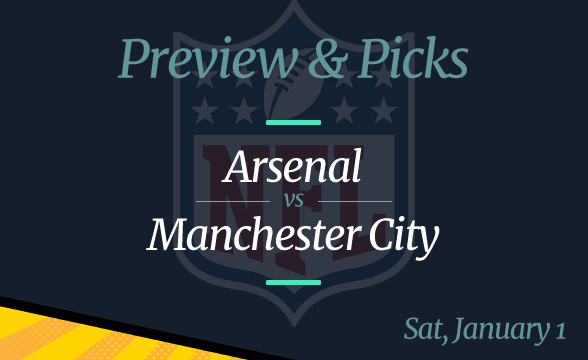 The next obstacle on Manchester City’s road to the title is Arsenal. The two will meet on New Year’s Day at Emirates Stadium in London, where the Gunners are 7-1-1 in the 2021-22 Premier League. The bad news for them is that they haven’t won a home match against the Sky Blues since 2015.

More bad news for Arsenal is that it’s very likely they’re not going to beat Manchester City on Saturday. Judging by the odds, the visitors should have a field day in London. One of the key reasons for that is that Arsenal is having a sort of COVID-19 crisis, with their manager Mikel Arteta testing positive a few days ago. The worst thing is that he’s not the only one.

All odds are per FanDuel as of December 30.

Undermanned Arsenal Heading for a Disaster

Not only will they miss their manager, but Arsenal will be without a couple of their key men as well. Three of their right-backs still haven’t been cleared after testing positive for the coronavirus – Takehiro Tomiyasu, Cedric Soares, and Calum Chambers.

Even if one (or all of them) makes a comeback, the guy probably isn’t going to be 100% fit after missing several practices.

Apart from COVID-19 problems, Arsenal also has a couple of injured players. On top of everything, a couple of their players could miss the game for international duties. For instance, Pierre-Emerick Aubameyang and Thomas Partey might have to leave for Cameroon to take part in the Africa Cup of Nations which starts on January 9.

Man City to Make a Giant Leap Toward the EPL Title

The final week of 2021 was fantastic for Manchester City. Not only did they destroy Leicester City on Boxing Day, but they also beat Brentford three days later. Even more importantly, Manchester City saw their main title competitors failing last week.

Chelsea drew with Brighton in their final game of 2021, while Liverpool got defeated by Leicester City. As a result, Man City now has eight points more than Chelsea and nine more than Liverpool. The best thing is that these two meet on Sunday.

This means that Man City has a chance to increase its advantage even more. For that to happen, though, they need to defeat Arsenal on Saturday. They did it in their previous nine Premier League duels. The tenth win is probably on the way.

Picks: Manchester city to win; over 2.5 goals to hit

2022-01-01
Previous Post: Trends Say You Should Bet These NFL Picks for Week 17
Next Post: Different Types of Games in Casino • This Week in Gambling