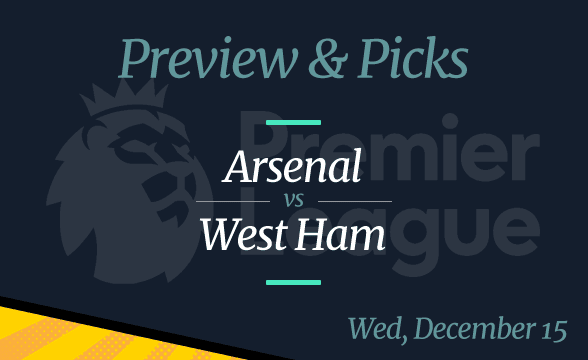 Two London rivals lock horns on Wednesday, December 15, 2021 – Arsenal and West Ham. The game is taking place at Arsenal’s Emirates Stadium, where this team is without a defeat this season. Further, on their turf, the Gunners won each of the previous six duels with the Hammers.

Can Arsenal add another win to the list? If they do it, the Gunners would overtake West Ham’s position in the Premier League table. This is because ahead of Round 17, the Hammers have just two points more than them.

All odds are per FanDuel as of December 13.

Here is a list of the best online sports betting sites that have been reviewed and tested by our iGaming experts:

Gunners Confident of a Good Result

Arsenal has a fantastic record against West Ham, but their most recent game finished 3-3. It happened in March when the Hammers scored two own goals.

What really is giving Arsenal confidence ahead of Wednesday’s game is that they’re coming off a 3-0 win over Southampton. It happened on Saturday when they played without their captain Pierre-Emerick Aubameyang.

The Gabonese striker came from France one day later than agreed, which caused him to miss practice. As a result, coach Arteta decided to drop him out of the squad.

A few days later, Arsenal’s striker is expected to make a comeback. His team will need him to play at his best as they’re facing off with a very tricky opponent.

Hammers Ready to Upset the Odds

Online sportsbooks see West Ham as the betting underdog. However, the same was the case several times this season, but the Hammers managed to upset the odds. The best example is the game against Chelsea, in which West Ham was priced at +375 but still managed to win 3-2.

The same was the score in the game with Liverpool a few weeks earlier, in which West Ham was a +320 pre-game underdog.

One may argue that when West Ham won those games, their players were in top form. Ahead of the Arsenal game, they don’t look too dangerous. In fact, they’re coming to the Emirates after a 0-0 with Burnley.

Still, there’s a caveat. Burnley is exactly the type of team that West Ham players hate playing against. The Clarets play defensive soccer, letting the opposition have the ball. The Hammers, however, usually don’t do that great when it’s up to them to control the tempo of the game.

Instead, they prefer to look for their chances through counter-attacks and set-pieces, which is exactly what’s going to happen against Arsenal.

West Ham’s pacey forwards surely have what it takes to outrun Arsenal’s defense, which could bring them their first win at the Emirates since 2015.