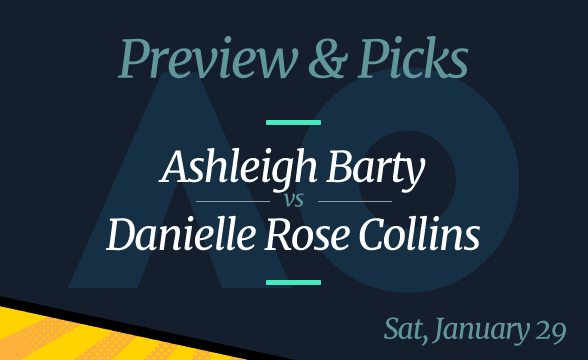 Born and raised in Australia, the world no.1 Ashleigh Barty has two Grand Slam titles in her collection. However, neither of those is an Australian Open title. The good news for the 25-year-old Aussie is that she has a chance to win the title by beating Danielle Rose Collins on Saturday.

Oddsmakers see Barty as a clear favorite for several reasons. First of all, she’s playing against Collins who’s sitting in the #30 position in the WTA Rankings. Another reason is that Barty’s been playing superb tennis lately, winning every single AO2022 match in straight sets.

If there’s a concern for Barty, it’s the fact that she was favored to win the last year’s tournament as well, but her journey ended in the quarterfinal when she lost to Karolina Muchova, a +350 underdog.

Barty’s been sitting at the top of the WTA Rankings since 2019, which is when we saw her win her first-ever Grand Slam tournament – the French Open.

Two years later, she got ahold of her second major title. It happened at the 2021 Wimbledon. When it comes to the Australian Open, the farthest she went – before the 2022 tournament –  was the semifinal of the 2020 event.

She now has an amazing chance to break the curse and win her a Grand Slam title in front of her own crowd. Judging by what we saw from her by now, such a thing seems very likely to happen.

So far in Melbourne, Barty has won each match by 2-0 in sets. The most games she lost in a match were against Amanda Anisimova in Round 4, when we saw Barty dropping a total of seven games.

In her most recent match – the semifinal clash with Madison Keys – Barty won 6-1, 6-3 in just one hour and two minutes.

The last time these two met, it was Collins who won. It happened last February at the WTA Adelaide when we saw the American player winning 2-0 (6-3, 6-4). However, back then, Barty was pretty much out of shape, as she had only just returned from an 11-month hiatus.

Fast-forward nearly a year and Barty looks unbeatable. Collins knows this, but you can be sure she’s not going to go to Rod Laver Arena with a white flag. On the contrary, she knows that by going strong, she can defeat big favorites. After all, she’s already upset the odds a couple of times at the 2022 Australian Open.

For instance, in the semifinal, she was a +120 underdog against Iga Swiatek (WTA #9) but still ended up winning 2-0 (6-4, 6-1). Plus, knowing that she stands a chance to win the first Grand Slam of her career, you can be sure Collins is going to give her best on Saturday. Still, her best probably isn’t going to be good enough to defeat Barty, although we could see her win one set.