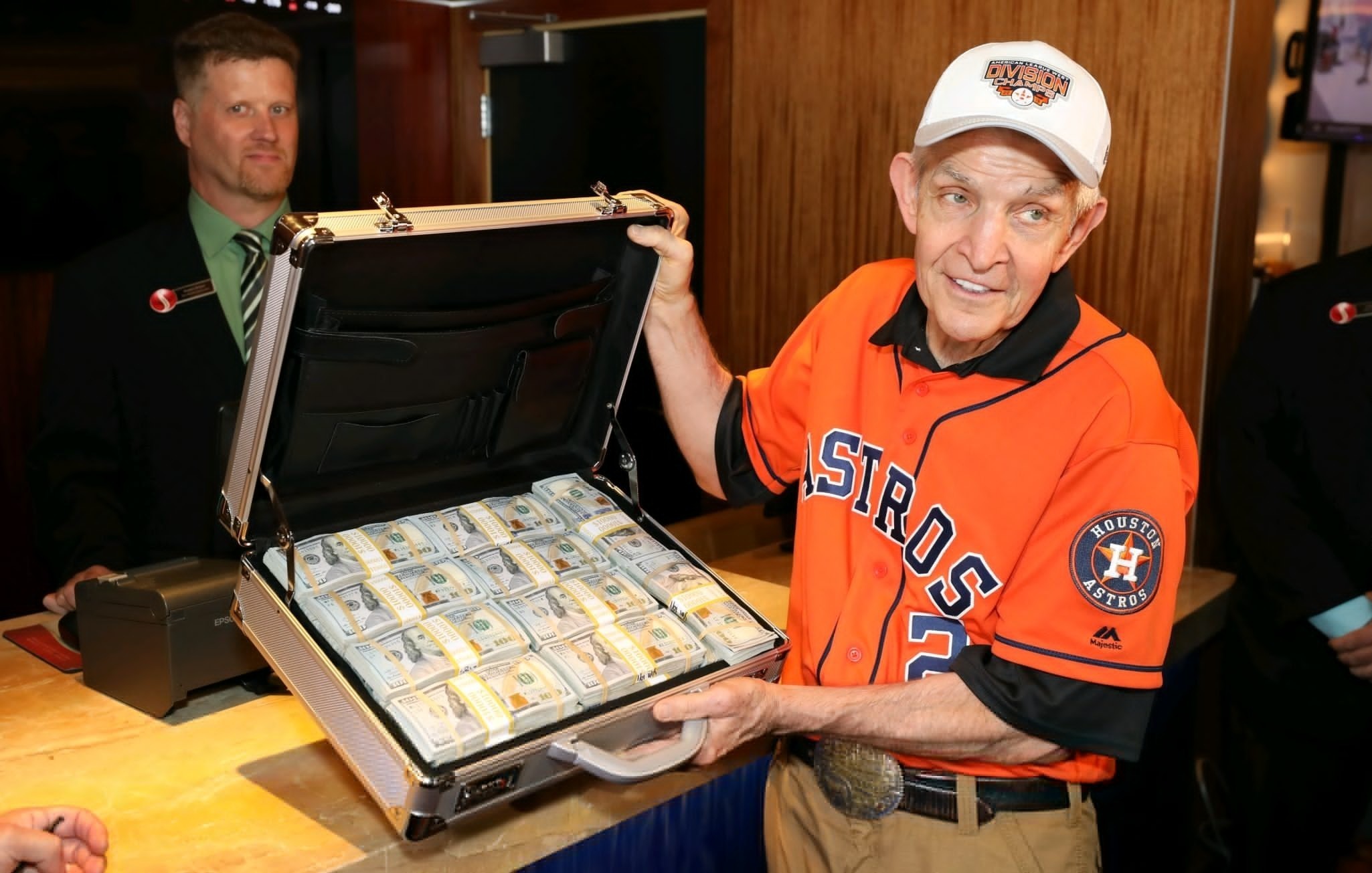 The Houston Astros weren’t the only ones celebrating a big victory Saturday night.

When Kyle Tucker caught Nick Castellanos’ foul out to win Game 6 of the World Series and clinch the title, it also meant Houston businessman Jim “Mattress Mack” McIngvale cashed in to the tune of $75.7 million.

McIngvale, whose high-profile bets are tied to sales at his Gallery Furniture stores, placed a number of bets totaling $10 million during the season on his hometown team winning the World Series. The sports bets act as insurance as he offers refunds to buyers should a certain team win a title. This year, some Gallery customers received double-their-money-back offers on the Astros winning it all for purchases they made earlier in the year.

The Astros had McIngvale throw the ceremonial first pitch before Saturday’s game.

Early Sunday morning, he posted a statement on Twitter, thanking the city, the Astros, and his wife, Linda.

The single biggest bet came in May. McIngvale bet $3 million at Caesars when the Astros had 10-1 odds to win the World Series. He netted $30 million from that wager, which the Las Vegas-based operator said represents the single largest payout in legal sports betting history.

Just before the World Series started, McIngvale and Caesars held a joint press conference to discuss the wager and also announce a mattress giveaway to veterans and first responders in Houston, Philadelphia, and Atlantic City.

Would we do it all again? You bet,” said Ken Fuchs, COO of Caesars Digital. “While Mack may have won this round on the field, we’re proud of how we teamed up to support first responders and military veterans in Houston, Philly, and Atlantic City. And to Mack – we tip our Astros cap – and remind him that he can now support his Texans and Rockets.”

The NFL’s Texans and the NBA’s Rockets are “attractively priced” at 1000-1, Fuchs noted. They both have the worst records in their leagues.

He and other winning Astros bettors received a congratulatory video from Betfred founder and CEO Fred Done on Saturday night.

“You had the guts, the balls to put your money on the line… You won. You deserve your money. I’m paying you,” Done said.

With the 2022 MLB season now complete, some sportsbooks have already posted their odds for next year.

BetMGM has the Los Angeles Dodgers as its favorite to win it all, with odds of 5-1. The Astros are next at 7-1, with the Atlanta Braves available at 8-1.

These odds will likely change during the offseason as teams make trades and sign free agents. The biggest impact on the odds could come from which team signs Yankees slugger Aaron Judge, who is about to hit the market after hitting an American League record 62 home runs.