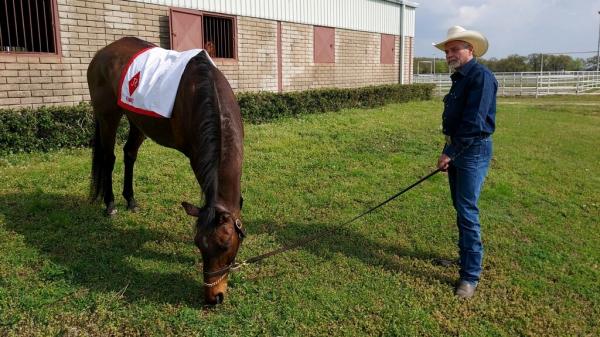 At Age 16, a New Scene for Kentucky Derby Winner Mine That Bird

Where Mark Allen goes, so goes 2009 Kentucky Derby winner Mine That Bird.

While most other Derby winners are whisked away to stud after their racing careers, gelding Mine That Bird has remained in the lives of co-owners Allen and Leonard “Doc” Blach since his 2009 lightning strike in Louisville, Ky., and 2010 retirement from racing.

Today, Mine That Bird is working with Allen in a role similar to a pony horse at HV Ranch near Lone Oak, Texas, where the owner is assisting trainer Rosa Ramirez. While Mine That Bird may not be a traditional pony horse, it’s a chance for Allen to stay close with his Derby winner.

“He’s a pretty good pony but he still wants to race them besides pony them,” said Allen, noting that Mine That Bird doesn’t hook up with any horses going out to the track but does walk alongside them with Allen aboard. “So really, I just ride him around and let him see the horses. He loves seeing everything that’s going on. He’s so smart; I love that horse.

“He’s so smooth. The other day he was bucking me, and he’s so smooth that it actually was fun,” said the 63-year-old Allen of his 16-year-old classic winner. “I just like to ride him around, let him stretch his legs a little bit, and let him feel like the big horse that he is.”

Mine That Bird continued to thrive that spring of 2009. The son of Birdstone finished second in the Preakness Stakes, where he defeated all male rivals but finished a length behind filly Rachel Alexandra, who would earn Horse of the Year honors in 2009. Mine That Bird then finished third in the Belmont Stakes.

After racing as a 4-year-old with Hall of Fame trainer D. Wayne Lukas, Mine That Bird was retired. He soon settled in at Allen’s Double Eagle Ranch, located near Blach’s residence in Roswell, N.M. Besides enjoying the ranch life, Mine That Bird would welcome fans – as well as curious tourists checking out the nearby UFO Museum – until Allen sold the ranch in 2020. Allen said Mine That Bird has been working in his current role for about 18 months.

“Right until the day he went with Mark to the track, we would have one or two visitors a week come and see him,” Blach said. “It was something to see. He loves people.”

Ramirez conditions Allen’s horses. And while Allen is assisting the young trainer; he emphasizes that Ramirez doesn’t need much help – she’s training the horses.

“I think she’s going to be a super trainer,” Allen said. “They let me hang around and I offer a few pointers… suggestions on prepping for a race and stuff like that; but they don’t need much help.”

In 2013 Mine That Bird briefly served as the Kentucky Derby Museum’s resident Thoroughbred, but he has spent most of his retirement with Allen. Both owners agree that it has been special to have their Derby winner with them all these years.

“It means everything to me to have him in my life,” Allen said. “He’s done so much for me. I just can’t tell you how much I love him.”

“I would go see (Mine That Bird) practically every day when he was at the ranch because he was right across the street from my place. I’d always go over there and see him; give him a peppermint,” said 88-year-old Blach, who has retired from his veterinary practice. “He was so used to me doing that over a period of years that when I’d drive in there with my pick-up truck, he’d see me and stand there and look at me with his ears up until I parked and came over to visit.

“I’d get out of the pickup and say, ‘Come here, Bird,’ and he’d walk over to the fence. He knew he’d get a peppermint or two.”