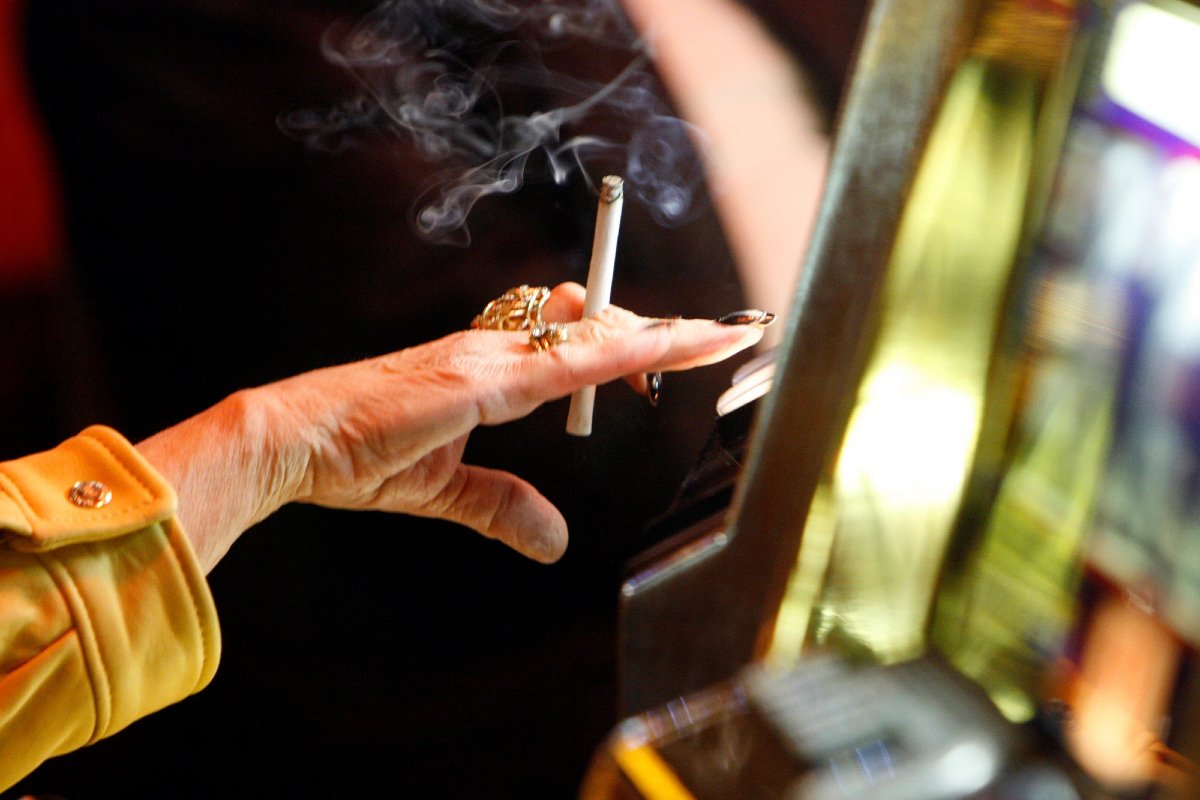 An Atlantic City casino smoking ban would have a devasting consequence on gaming revenue, so says an analyst at CBRE Equity Research.

An Atlantic City casino guest smokes a cigarette while playing a slot machine. While a coalition of anti-smoking supporters is growing, a ban on indoor casino smoke would negatively impact gaming revenues, one analyst says. (Image: AP)

John DeCree, a senior analyst at Union Gaming, a subsidiary of CBRE since 2021, projects that a complete ban on indoor casino smoking at Atlantic City’s nine casinos would negatively impact annual gross gaming revenue (GGR) by as much as 20-25%.

New Jersey lawmakers continue to mull legislation that would end the smoking loophole afforded to the casinos and under the state’s clean air law passed in 2006. Currently, Atlantic City casinos can allow smoking on up to 25% of their gaming floor. But DeCree says those smoking spaces are where upwards of 50% of the annual GGR is generated.

This is consistent with our research over the years that often reveal smoking sections in casinos generate substantially higher win per days than non-smoking sections,” DeCree wrote.

DeCree adds that since Atlantic City is primarily a drive-in destination, the East Coast gaming mecca relies heavily on gamblers from Philadelphia and New York. Outlawing cigarettes, the Union Gaming analyst reasons, would result in some of those players opting for casinos where smoking remains permitted in Pennsylvania and Connecticut.

A growing coalition of Atlantic City casino workers argue that it’s long past due to eliminate indoor smoking on the gaming floors. The movement has gained bipartisan support in Trenton where at least 43 elected lawmakers have lent their names to Senate Bill 264/Assembly Bill 2151. The bills are clones of one another and each seeks to extinguish casino smoking.

The Casino Association of New Jersey, however, says such a ban would hurt the industry and result in substantial job layoffs. The trade group earlier this year commissioned a study on the consequences of banning cigarettes. That report, conducted by Spectrum Gaming Group, also found that a smoking ban would hurt GGR in a similar projection as the one issued this week by DeCree.

DeCree adds that the 20-25% negative gaming revenue forecast is conservative.

“Atlantic City must pull its customers away from more conveniently-located gaming options and the absence of smoking would leave many of its higher value smoking customers without reason to make the trip,” Decree said. “For those smoking customers who do still make the trip to Atlantic City, smoking breaks would likely take longer relative to regional casinos given the size and scale of Atlantic City casinos resulting in a greater loss of Time on Device (TOD) – a key metric in gaming revenue.”

Atlantic City casino workers argue that a smoking ban would not hurt gaming as much as the industry and analyst believes. But even if it would, they say their health should take precedence over GGR and profits.

DeCree says the economic health of the nine casinos would be expected to suffer in wake of a complete smoking prohibition. The analyst pinpoints several other markets where casino smoking was eliminated and the GGR impact they each endured in the first 12 months after the regulatory implementation.

DeCree cites Harrah’s New Orleans seeing its revenue plummet 20% after the city-instituted smoking ban when into effect in April of 2015. Similarly, Chicagoland casinos in Illinois saw their GGRs decline 22% after a smoking prohibition was instituted in January of 2008.