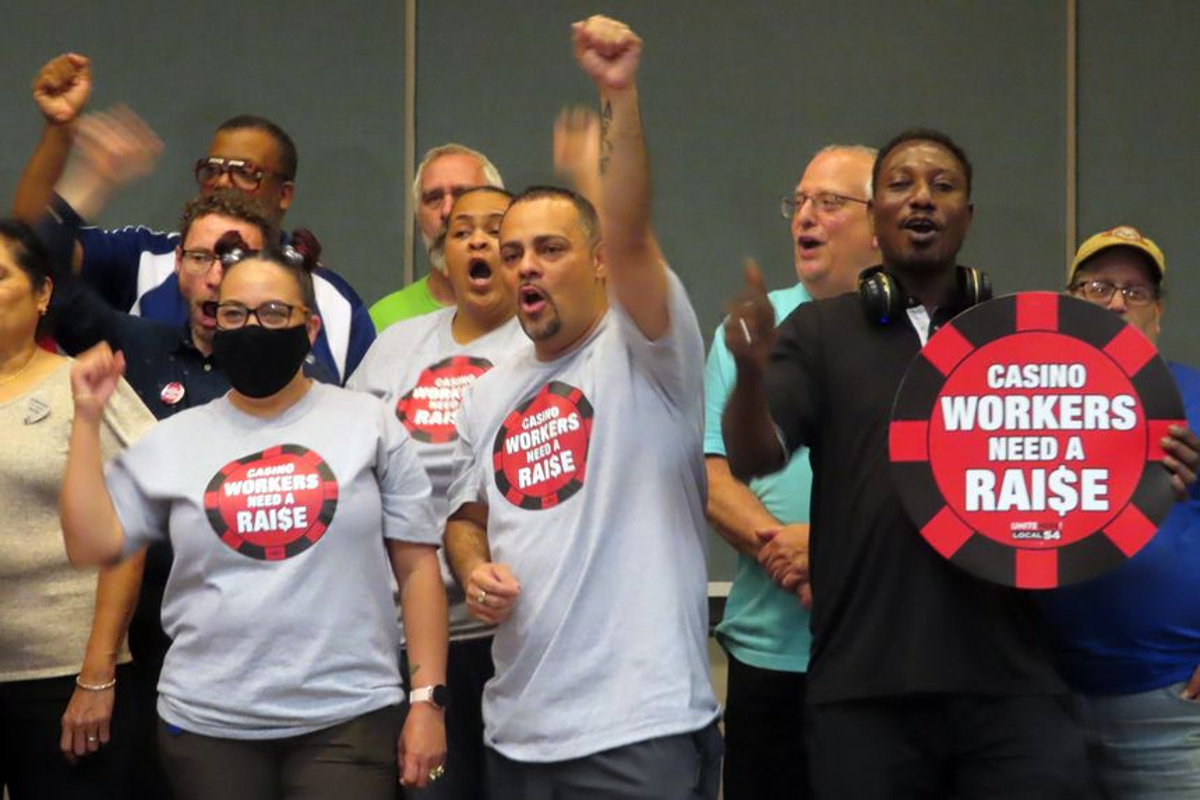 Members of the Atlantic City casino union Unite Here Local 54 have authorized their leaders to call a strike at any time after July 1 unless new labor agreements are reached with the nine resorts.

Members of the Unite Here Local 54 union react after voting in Atlantic City to authorize a strike against the casinos next month if a new contract isn’t reached. The Atlantic City casino union is seeking higher wages for its roughly 10,000 members. (Image: AP)

The collective bargaining agreements that dictate minimum pay and an array of working conditions for some 10,000 hospitality service workers employed by the Atlantic City casinos expired June 1. Unite Here Local 54 officials are negotiating new terms with casino reps, but the two sides are seemingly far from signing new contracts.

Unite Here said about 96% of the “several thousand” union members who voted yesterday during the strike authorization lent their backing to such a protest.

The industry better not take this lightly,” warned Bob McDevitt, president of the Local 54 chapter. “This is a no B.S. thing.”

Union leaders are readying their arsenal of negotiating weapons by asking members to authorize a strike. The approval could give the union the upper hand in the deliberations over the next two weeks, as the resorts would suffer greatly should their bartenders, cooks, waitstaff, housekeepers, bellmen, and porters walk off the job during the long July 4 Independence Day weekend.

THE VOTES ARE IN: Thousands of casino workers cast ballots today and 96% have voted in favor of authorizing the worker negotiation committee to call a strike if an agreement is not reached with Caesars, Harrah’s, Tropicana, and Borgata, by July 1st and Hard Rock by July 3rd! pic.twitter.com/OZrLsgHeuO

The Atlantic City casino union is seeking pay increases for its members that will better allow the majority of workers to maintain middle-class lifestyles. The union has in recent contract negotiations more focused on health and retirement benefits, as well as worker safety, than direct take-home pay.

But with inflation soaring and Americans feeling the pain at the gas pump, Unite Here says its members deserve a “significant” raise. What sort of percentage increase that entails isn’t exactly clear.

The casinos’ representation in the bargaining has so far opted to refrain from speaking publicly about the discussions and what the industry seeks through the new agreements.

Ruth Ann Joyce, a longtime Atlantic City bartender who has worked at Harrah’s and Hard Rock, says the low pay currently being offered by the casinos is resulting in skeleton staffing.

Historically, our fights in general have dealt with health care. This go-round, it’s about economics. We can’t find workers because there’s no money, and it’s hard to hold onto the workers we do have because they can go somewhere else and make more,” Joyce told the Associated Press.

Representatives from MGM Resorts and Caesars Entertainment are representing the nine casinos. The two companies dominate the Atlantic City gaming market. Of the $2.55 billion the brick-and-mortar casinos won last year, MGM and Caesars properties accounted for $1.36 billion of the revenue — or about 53%.

Hard Rock, which has become the second-richest casino in town behind MGM’s Borgata, also has a considerable presence in the union negotiations.

Ocean Casino Resort and Bally’s will not be targeted for a strike, McDevitt said. The union boss explained that those two Boardwalk properties have ongoing agreements with Unite Here saying they will adhere to whatever collective bargaining agreement MGM/Caesars reaches with the trade group.

Since those two casinos are not directly involved in the bargaining process, McDevitt says they will be spared from a protest. Golden Nugget and Resorts also largely follow the pack but do have a voice in the discussions.

“Bally’s and Ocean are in the green zone. Resorts and Golden Nugget are in the yellow zone. The rest are in the red zone,” McDevitt said of where a strike might occur.