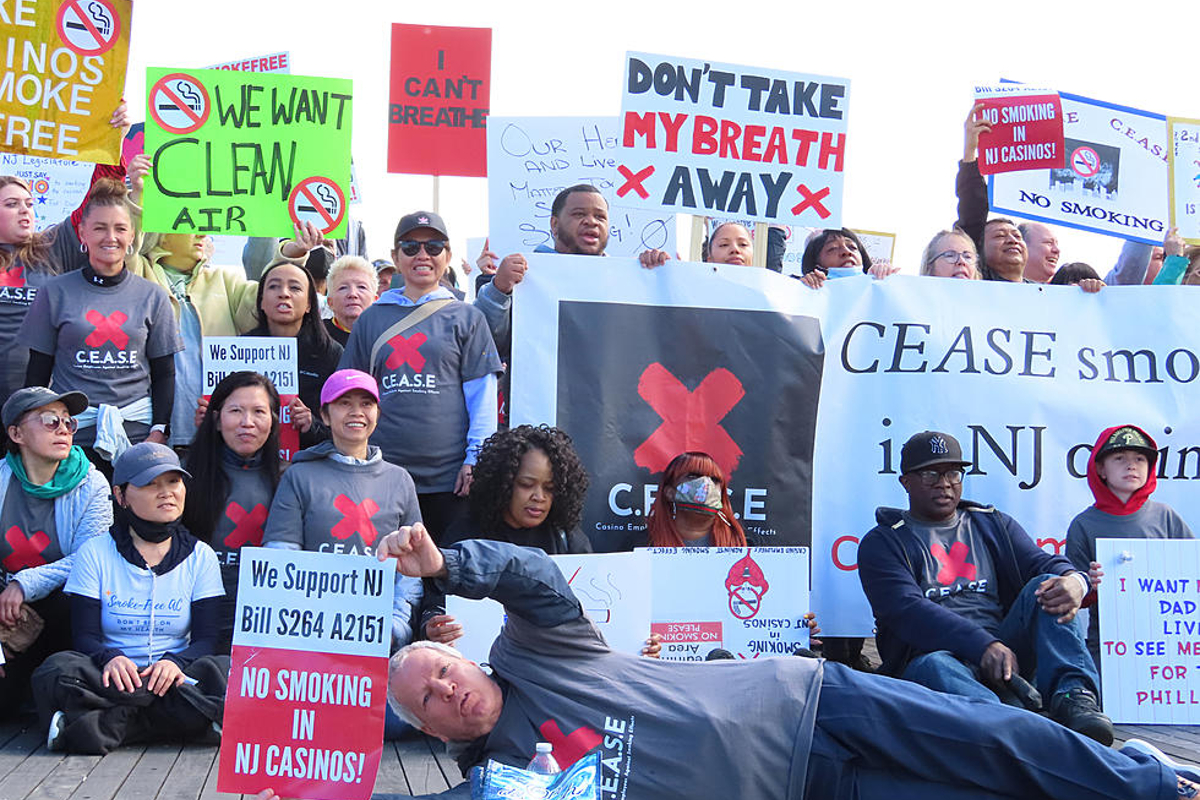 Atlantic City casino workers who want their places of employment made smoke-free campaign along the Boardwalk in April 2022. Anti-smoking advocates plan to rally this week during the East Coast Gaming Congress. (Image: New Jersey 101.5)

Casino.org reported last week on the abrupt cancellation of a previously planned discussion at the ECGC. That talk was regarding legislative efforts in Trenton to fully extinguish indoor smoke from the casinos. Under New Jersey’s Smoke-Free Air Act of 2006, Atlantic City casinos are permitted to designate up to 25% of their gaming space for indoor smoking.

Resorts Casino Hotel CEO Mark Giannantonio was set to appear at an indoor smoking roundtable during the ECGC, which runs September 21-23. But Giannantonio withdrew from the event last week and instead issued a statement. That note reaffirmed the local gaming industry’s stance that enacting a smoking ban so soon after the pandemic would threaten gaming revenue, and could cost as many as 2,500 jobs.

Giannantonio said the Casino Association of New Jersey, the Atlantic City gaming industry’s primary lobbying arm in Trenton, “has been very transparent” in its opposition to eliminating indoor smoking from the casinos.

“Casino Employees Against Smoking’s Effects (CEASE)” is a political action committee that formed soon after indoor smoking was allowed to return to the casinos surrounding the July 4, 2020, holiday. CEASE claims its membership consists of “thousands of casino dealers and other frontline gaming workers” who believe they shouldn’t have to risk their health in order to receive a paycheck.

CEASE coleader Lamont White, who is a dealer at the Borgata, is calling on smoking opponents to organize outside the East Coast Gaming Congress this Thursday. White is urging anti-smoking supporters to gather along the Boardwalk outside the Hard Rock.

With lawmakers returning to Trenton this month, casino workers and advocates for smoke-free casinos are making clear that no worker should be subjected to breathing secondhand smoke. Bills to close the casino smoking loophole and get rid of smoking inside Atlantic City casinos have earned the support of a bipartisan majority in both chambers of the state house as well as the support of a broad coalition, including the United Auto Workers, the union representing Atlantic City casino dealers,” a CEASE statement provided to Casino.org read.

New Jersey Assembly Bill 2151 and Senate Bill 264 each have adequate support among their legislative chambers to pass the measures. Governor Phil Murphy (D) supports making the casinos go smoke-free, too.

But leaders among the Democratic-controlled legislature have moved slowly with the potential regulatory change because the leading casino union in Atlantic City — Unite Here Local 54 — opposes prohibiting casino smoking at this time.

The ECGC is organized and produced by Spectrum Gaming Group, an independent research and regulatory consulting firm in New Jersey. The consultancy said it was unsuccessful in finding a replacement for Giannantonio for the smoking discussion on such short notice. That led to the roundtable being canned.

Cynthia Hallett, who heads up the national anti-smoking group “Americans for Nonsmokers’ Rights,” said it’s “remarkably telling” that no industry rep was willing to defend the pro-smoking position in a public forum.

The CEASE gathering will take place around 2:15 pm on Thursday, immediately following Murphy’s keynote address at the Gaming Congress.

2022-09-21
Previous Post: Eyeing an Upset Selection in the 2022 Pennsylvania Derby
Next Post: A Quick Guide To Attending The Races –