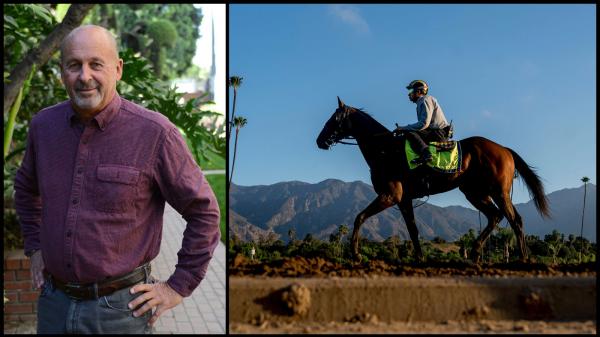 John Perrotta is an accomplished author/writer and a lifelong horseman with experience in nearly every aspect of Thoroughbred racing.

A University of Miami graduate, Perrotta in 1978 became one of the first professional racing managers in the U.S., enjoying success with John Forbes Stable, one of the leading barns in the country, and then managing Robert Brennan’s Due Process Stables, which raced such champions as Deputy Minister and Dehere. Since the Due Process dispersal in 1995, Perrotta has raced multiple stakes winners in his Star Stable and was the co-breeder of 1996 Belmont Stakes winner Touch Gold.

Perrotta also has credits in radio and television, notably working on the pilot and subsequent HBO series “LUCK,” which premiered on that network in January 2012.

Following the cancellation of “Luck,” Perrotta subsequently wrote “Out of Luck” – a depiction of an imagined racetrack-based story that included some of the characters depicted in the ill-fated series – for America’s Best Racing that later was also published in print. Perrotta’s other books include “If Wishes Were Horses,” “Half a Chance,” and “Racetracker: Life with Grifters and Gamblers …”

His latest book, “Thoroughbred Investor’s Bible,” draws on his decades-long experience in the horse industry and provides a comprehensive guide to racing, breeding, and sales for prospective owners. Perrotta took some time to chat with America’s Best Racing about his new book.

The “Thoroughbred Investor’s Bible” is structured according to several rules you recommend new owners to follow. What are some of them and how did they help you and your cohorts succeed?

The main one is what I call Arnold’s Rule:  “Don’t leave your brains at the gate!” – meaning don’t get carried away too soon. Similar to the old adage, “marry in haste, repent at leisure.”

“A good horse can come from almost anywhere.” That well-known saying is reprinted in your first chapter. What should novice owners know about ins and outs of buying horses, especially when they go to the sales for the first time?

The thing about horses at horse sales is that they all look pretty in the ring. You can buy an athlete with some faults that they will overcome, but it takes a trained eye to see the difference, so make sure you have an expert.

One of the central tenets of the “Thoroughbred Investor’s Bible” is for new owners to surround themselves with honest employees who have a proven track record. How important is doing research on potential trainers, bloodstock agents, and other workers?

Nothing is more important. I have mentioned numerous individuals as examples of potential associates but always advise prospective investors to do their own homework by going to the sources identified in the “TIB,” reading as much as they can and thoroughly checking references.

What advice would you give to new owners about the ups and downs of the business, where a 20 percent win rate is considered a success?

As simple as it may look, the horse game may have more variables than any other endeavor you may attempt. If your personality demands that you win every battle, it’s not for you. Sometimes you can do everything right and still not get a good result. That’s what we refer to as “racing luck.”

In the “Thoroughbred Investor’s Bible,” you go into detail about why new owners should consider focusing their initial purchases on fillies instead of colts. Can you summarize that strategy?

Dealing in female horses can be a safer strategy since they have potential without as much downside risk as males. A filly with a decent pedigree that can’t make it at the races may still have some value as a broodmare, whereas a colt with little talent might have little value. Or even worse, if he’s gelded, none.

What are the advantages of jumping into horse ownership through a partnership?

The advantage is getting your feet wet with no chance of drowning. Partnerships and syndicates give a novice the chance to figure things out while learning the ropes.

How do you see Thoroughbred aftercare evolving over the next 10-15 years? How important are aftercare and the role of retirement farms to the sport’s survival?

Perhaps aftercare should have been addressed in the first chapter – it’s that important. The average person’s perception of horses has changed dramatically over the past 20 years and potential participants in the industry should be aware of the possibilities that exist for re-purposing racehorses. The Thoroughbred Aftercare Alliance has opened countless doors for owners wishing to see their beloved athletes enjoy a good life after their career is finished.

Which event or track would you choose to expose a newbie to horse racing for the first time with the goal of “wowing” them into forming a lifelong attachment to the sport? Big event or regular afternoon with the railbirds?

Both are important, but a “regular” day at the races gives potential fans a better chance to get up close and personal with the horses, jockeys, trainers and owners. Most tracks have introductory programs with hospitality hosts who can answer questions and make sure newbies have a pleasant experience.

What’s the most important reform the sport needs to make going forward to attract new fans – which have the potential to become new owners?

I’d like to see stiffer penalties for cheaters and less opportunity for offenders to use litigation to slide by. The racing game lives on the wagered dollar and when bettors lose confidence, they go to other sports. Of course, the one change many of us have been crying for over the years is a central governing body with a commissioner like football or baseball who assures we all play by the same rules.

If HBO greenlighted a companion series to “Luck,” where should it be set, who would you tab as the lead actors, and what would be the plot of the pilot episode?

We originally considered a smaller track for the setting, like River Downs (now Belterra Park), but the advantage of Santa Anita Park was both the stunning architecture as well as the lovely mountain backdrop and the access to film crews went a long way. I think Hialeah or Saratoga would make for excellent locations too.

As for cast, we had a fantastic ensemble. And I think all of them would return in a heartbeat.