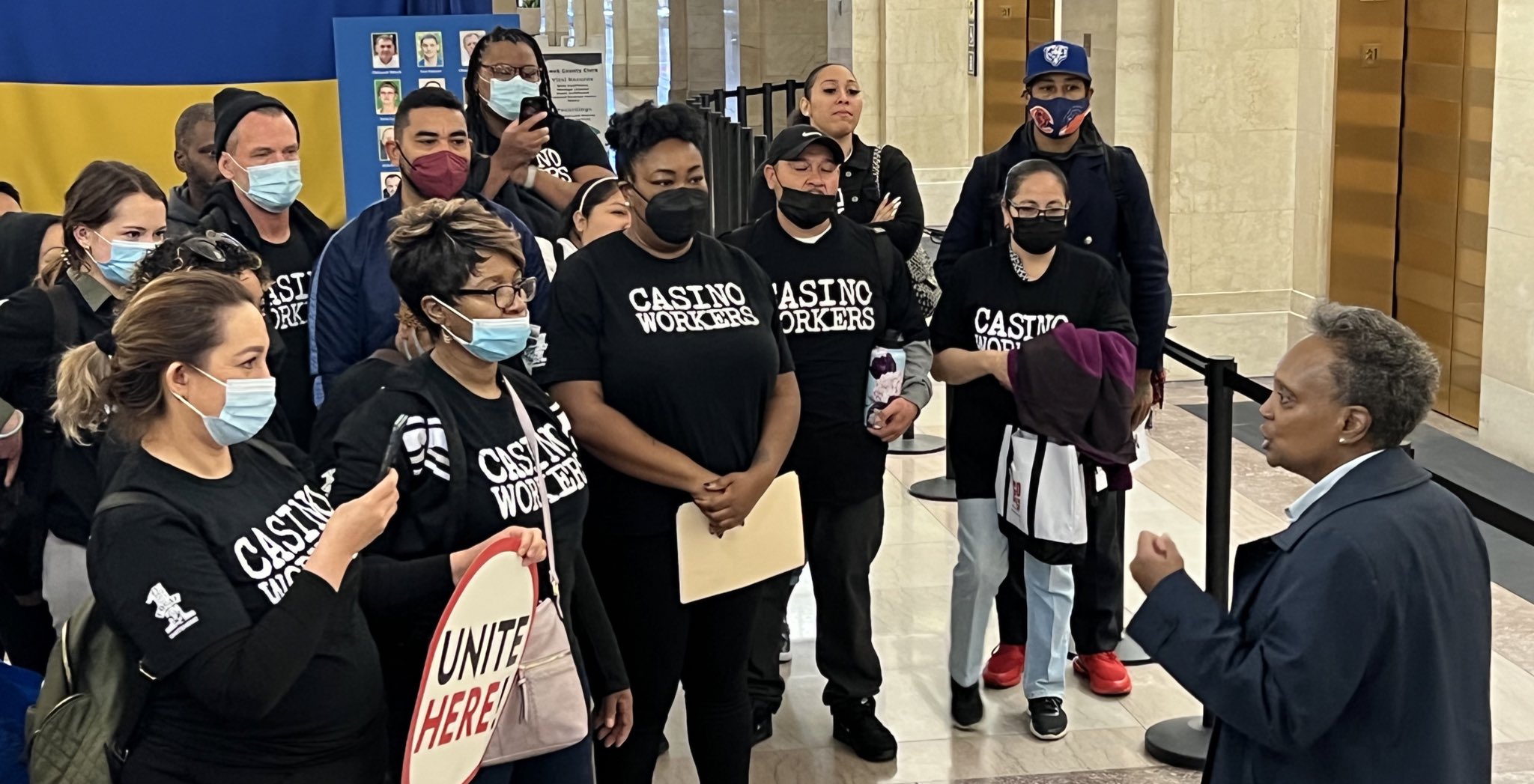 A special committee of the Chicago City Council voted overwhelmingly on Monday to support Mayor Lori Lightfoot’s pick of Bally’s Corp. to build a $1.7 billion casino along the Chicago River on the city’s Near North Side.

Chicago Mayor Lori Lightfoot (bottom right) meets with members of UNITE HERE Local 1 at City Hall on Monday during the labor union’s rally in support of Bally’s $1.7 billion casino proposal for the city. Hours later, a special committee of the Chicago City Council referred the agreement to the full council, which is set to vote on the project Wednesday. (Image: UNITE HERE Local 1/Twitter)

Now the full council will convene on Wednesday to consider passing an ordinance to amend the city’s laws and allow casino gaming. The body must also approve the host agreement between the city and the Rhode Island-based company.

Wednesday’s vote is likely a formality. Based on the committee’s 27-3 vote in favor Monday, the casino proposal already has more than enough support from the 50-member City Council to pass.

“Bally’s thanks the City Council’s special casino committee for their thoughtful review of our proposal,” Bally’s Vice President of Corporate Development Christopher Jewett said in a statement to Casino.org after the vote. “We look forward to ongoing dialogue with the City Council, City leaders and community, as this moves toward a full Council vote.”

Once the full Council gives its approval, the city will receive $40 million from Bally’s and the project will head to the Illinois Gaming Board for it to consider awarding a license to the company. The city will also begin the rezoning process for the project slated to be built at the Chicago Tribune’s printing plant.

Lightfoot, who has pushed for the quick vote, announced Bally’s as the city’s preferred gaming partner on May 5. The city spent more than a year on the solicitation process to identify a casino operator and received bids from Bally’s, Hard Rock International, and Rush Street Gaming.

‘Final Crack at the Apple’

Monday’s committee meeting was a continuation of the meeting that lasted three hours on Friday and lasted more than two-and-a-half hours itself. The committee also met on May 9 and April 25.

Alderman Brendan Reilly voted no along with Aldermen Brian Hopkins and Michele Smith. While supportive of Chicago building a casino, Reilly opposed Bally’s proposal because of concerns it might affect residents who live in his ward, which is adjacent to the proposed site. He also slammed the city’s plans of putting the temporary casino in the Medinah Temple, which is in his ward.

Reilly pointed out that city officials and Bally’s amended their agreement after each of the special committee meetings.

This is your final crack at the apple, folks, and once you let this go, it’s a blank check for the administration to finish the work,” Reilly said in his closing remarks. “Each hearing we’ve had this has gotten a little bit better. Why stop now?”

In the end, committee members were swayed by promises of 3,000 construction jobs and another 3,000 permanent positions within the casino. There’s also a plan to encourage minority ownership in the project through the purchase of microshares in the Chicago casino.

In addition, tax revenues from the casino would cover about 9% of the city’s pension commitments to its firefighters and police officers, and city leaders said the $40 million upfront payment would erase a chunk of a proposed $300 million shortfall for the upcoming fiscal year.

“This deal is going to help us to be able to balance our budget but also to deal with these pension challenges that we’re going to have in the future,” said Alderman Walter Burnett, Jr., whose ward includes the permanent casino site. “And I don’t know what else we can do. If we postpone this, are we going to miss the boat and have to come up with something else in order to make these things happen? And what else are we going to do to make these things happen?”

As the committee met, members of the labor community held a rally at City Hall in support of the Bally’s project. Bally’s entered into an agreement to use union labor for the development, a critical piece for many council members.

Supporters of Bally’s proposal include UNITE HERE Local 1, which represents more than 15,000 hospitality workers in the Chicago area and Northwestern Indiana hotels, restaurants, and casinos. Lightfoot met with union members before the committee meeting.

Union members said the casino project could be transformative for Chicago residents.

Too many young people in our communities are in desperate need of good jobs like mine, and for too long, they’ve been forgotten and left behind,” union member Shameeka Torry said at the rally. “The Chicago casino will let more people like me have a shot at changing their lives for the better.”

In addition to providing thousands of jobs for local residents, Chicago officials said a casino in the heart of the city would help recoup a significant portion of the money Chicago residents gamble in Indiana.

City CFO Jennie Huong Bennett said the state of Illinois estimates it loses $331 million annually when Illinois residents go to an Indiana casino. The Chicago casino would help recapture about $190 million, or more than 57% of that, she said.

With 3,400 slots and 170 table games, Bally’s will operate the largest casino in Illinois when the permanent structure opens. Based on the current timeline, that’s expected to happen in 2026.