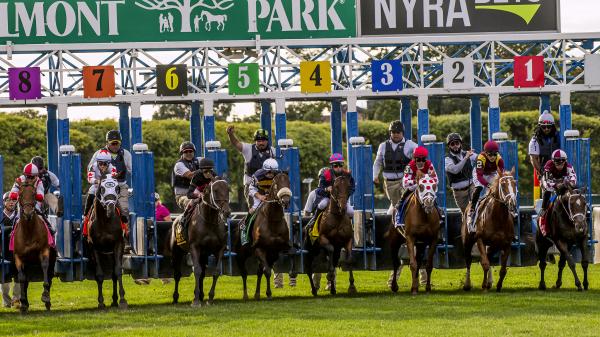 Among that group, Stone Age may be the first to look at as the colt won the Group 3 Derby Trial Stakes in May before a sixth of 17 finish in the Group 1 Cazoo Derby last month. Nations Pride finished eighth in the same race, 2 1/2 lengths behind Stone Age following four straight wins going back to last October. Royal Patronage finished 16th in the Derby but just prior to that finished second in the Group 2 Al Basti Equiworld Dubai Dante Stakes. The European contingent also includes Machete, who finished second in the Group 3 Prix de Guiche in May before a seventh of 15 finish in the Group 1 Prix du Jockey Club (French Derby) last month. Although bred in Kentucky, Implementation has run seven times in Europe with his best effort being a third-place finish, just a quarter of a length behind Machete, in the Prix de Guiche. Stolen Base leads the North American-based contingent, having earned his biggest win to date when victorious in the Grade 2 American Turf Stakes Presented by BMW in May. Emmanuel and Napoleonic War ran similarly well when first and second, respectively, in the Grade 2 Pennine Ridge Stakes on the Belmont turf last month. Sy Dog won the Grade 3 Kentucky Utilities Transylvania Stakes in April before a third-place effort behind Stolen Base in the American Turf and has potential to improve, as does Pennine Ridge third-place finisher Limited Liability. Grand Sonata won the Grade 3 Kitten’s Joy Stakes on turf in February before a runner-up effort behind Sy Dog in the Transylvania and a third-place finish in the Audubon Stakes in June and is yet another proven competitive at this level. Classic Causeway tries turf for the first time in the Belmont Derby after eight races on dirt, including wins in the Grade 3 Sam F. Davis Stakes and Grade 2 Lambholm South Tampa Bay Derby earlier this year. Last but certainly not least, Tiz the Bomb returns to turf after four races on other surfaces, with one of his best efforts coming last fall on the grass when second of 13 in the Grade 1 Breeders’ Cup Juvenile Turf.

Although only won by European horses making their first North American starts in only two of the last 10 years, this year’s Belmont Derby Invitational lends itself to being won by one of the five European invaders for a number of reasons. First and foremost, none of the horses based in the states has ever run the mile and one-quarter distance on turf and only one horse, Classic Causeway, has ever run the distance, having finished 11th in this year’s Kentucky Derby Presented by Woodford Reserve. With that in mind, Stone Age gets top billing in this year’s race based on the fact that he’s following an identical pattern to last year’s winner, Bolshoi Ballet, who also was trained by Aiden O’Brien and ridden by Ryan Moore. Like Bolshoi Ballet, Stone Age last ran in the Cazoo Derby, finishing sixth of 17, compared with seventh of 11 for Bolshoi Ballet.  Also, like Bolshoi Ballet, Stone Age won the Derby Trial Stakes prior to running in the Cazoo Derby. That effort earned a 112 Equibase Speed Figure, which is the second-highest earned by any horse in the field behind the 117 figure Machete earned when seventh in his most recent race. Previously, Stone Age earned a career-best 113 speed figure when second in the Criterium de Saint Cloud Stakes last October. The Derby Trial, as well as the race Stone Age  won prior to that, were both the same mile and one-quarter distance in a counter-clockwise fashion as the Belmont Derby. Therefore, repeating either of those two efforts is good enough to win this race.

Royal Patronage was much farther back in the Cazoo Derby compared with Stone Age, but his effort just prior to that, in May, was as good as the race Stone Age ran that same month. That was a second of eight finish in the Dante Stakes, where the colt found a path with three furlongs left to run and closed well for second behind Desert Crown, who came back to win the Cazoo Derby. Last September, Royal Patronage won the very important Royal Lodge Stakes as well, with those two efforts earning 110 and 108 Equibase Speed Figures on par with the 110 and 112 figures Stone Age has earned this year. He also earned a 113 figure when eighth of 15 in the QIPCO Two Thousand Guineas in April. The Dante Stakes was run at the distance of a mile and five-sixteenths, so we know the mile and one-quarter distance of the Belmont Derby will be no problem. Getting local jockey Joel Rosario, Royal Patronage should be taken very seriously as a contender.

Nations Pride showed a lot of promise and talent in his second start as a 3-year-old in April when drawing off to win the Newmarket Stakes with a 106 Equibase Speed Figure. That was his second straight win at the mile and one-quarter distance of the Belmont Derby. He then finished eighth in the Cazoo Derby (with a 108 figure), 2 1/2 lengths behind Stone Age and well ahead of Royal Patronage. He gets the services of world-class jockey Frankie Dettori and, it must be noted, Nations Pride is trained by Charles Appleby, who has a phenomenal record when shipping horses from Europe to race in North America. According to a Stats Race Lens query, in the last five years Appleby has a record of 13 wins, six seconds, and two thirds in 22 races, including 3-3-2 in eight races on the New York Circuit consisting of Aqueduct, Belmont, and Saratoga Race Course. Except for that eighth-place effort in his most recent race, Nations Pride was never worse than second in five races and, after a runner-up debut last summer, won four in a row, each by wide margins. That provides enough reason to believe this colt could also be very competitive in the Belmont Derby.

Machete gets honorable mention as he comes into this race off a career-best effort even though seventh in the Prix du Jockey Club Stakes last month on the same weekend as the Cazoo Derby. That earned a 117 figure because of the high-class nature of the race. Like the Dante Stakes in which Royal Patronage finished second, the Prix du Jockey Club was run at the longer distance of a mile and five-sixteenths, so this colt could also give a good account of himself.