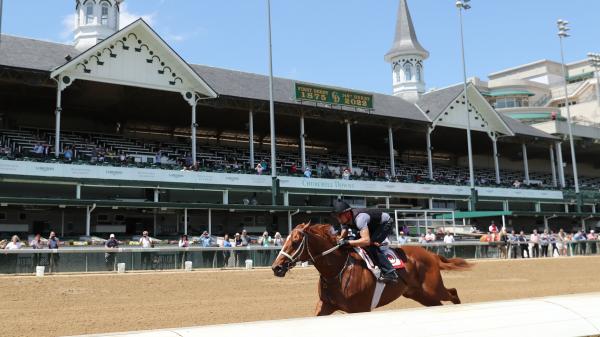 Lindsy Reed is very much part of the team that produced one of the great upsets in racing history, 80.80-1 Rich Strike’s emergence in the Kentucky Derby Presented by Woodford Reserve. Trainer Eric Reed is assisted by his wife, Kay, and Lindsy, their daughter.

The family operates Mercury Equine Center in Lexington, Ky. The facility features 160 stalls, a five-eighths of a mile training track and an equine pool.

Lindsy, 26, is so committed to the 60-acre farm that she moved there after a December 2016 fire, believed to be caused by a lightning strike, killed 23 horses and destroyed one of three barns.

Former $30,000 claimer Rich Strike – better known around the barn as “Richie” – will attempt to show he was no one-race wonder in the June 11 Belmont Stakes Presented by NYRA Bets at Belmont Park. Lindsy is taking followers of America’s Best Racing along for the ride in a diary written with Tom Pedulla.

When I saw Rich Strike charging toward the lead in the Kentucky Derby, I could not believe my eyes. I remember thinking to myself, “This isn’t real. This isn’t happening. This is not happening!”

It was wonderfully real, of course. It was something we had not really dared to dream about. We just wanted our jockey, Sonny Leon, to take good care of Richie, get him home safely with a 20-horse field and not finish last.

When he won, we were as shocked as everyone else. We were all just flabbergasted. Even as we turn our attention to the Belmont Stakes, I am still struggling to take in everything that happened. It still feels a bit surreal.

As a family, we take immense pride in beating the odds. With the devastating losses caused by the fire, we know first-hand how hard this industry can be. My father found the strength to carry on and Richie’s victory in the Derby showed what the little guy can accomplish. I will compare the horsemanship of my grandfather, Herbert, and my father to anyone in the country. They proved you don’t have to have 400 horses spread all over the country to win the biggest race of all.

Derby day was an unbelievably powerful experience. The attention after that was so overwhelming that my father had to hire a security firm to help us through it. Before the officers got to know me, I was showing them identification and explaining that I not only worked at the farm but lived there.

Television crews and photographers all wanted time with my father and Richie. Reporters who had never heard of us before suddenly wanted to tell our story. Fans wanted to visit the horse that barely made it into the Derby field the day before and have their pictures taken with him. We did our best to accommodate everyone as long as Richie was left alone after 10 a.m. He prefers to nap then and quiet time is important as he re-charges for the Belmont.

Everyone wanted to know if we were going on to the Preakness. The pressure was immense to take a shot at the Triple Crown. It was widely assumed we were going to run. But we all had our doubts about whether it was the right thing to do almost as soon as we left Churchill Downs.

We thought all along that the Belmont would be the Triple Crown race that would suit Richie best and he is showing us every sign that he will be ready for the big day. The farther he goes, the stronger he gets. The shorter races, they’re just not for him.

We think a mile and a half will be perfect. We cannot wait for Richie to prove us right.