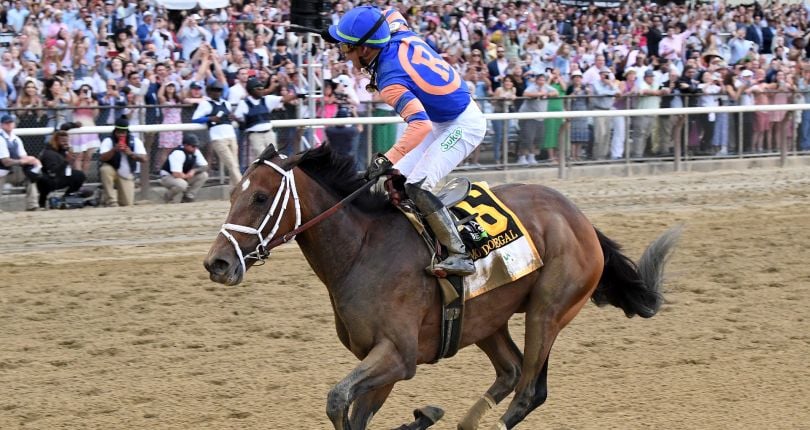 Belmont Stakes Handle Drops Sharply, Down More Than $10M from 2021

Betting on this year’s Belmont Stakes and the other 12 races held Saturday at Belmont Park fell significantly from last year, according to a release from the New York Racing Association.

Jockey Irad Ortiz Jr. turns to the crowd at Belmont Park Saturday as he and Mo Donegal win the Belmont Stakes. Betting on the third leg of the Triple Crown fell by 17% from last year’s race, which generated a record handle for a Belmont without a Triple Crown on the line. (Image: Chelsea Durand/NYRA)

The Belmont Stakes was part of a 13-race card both this year and last year. Much like the marquee race, the handle for the entire day also declined. After bettors wagered $112.7 million last year – a Belmont Stakes Day record when a Triple Crown was not on the line – this year’s card attracted an all-sources handle of $98.8 million, a 12.3% drop.

Like last year, no horse had a chance to become a Triple Crown winner Saturday. Mo Donegal won the race as the 5-2 post-time favorite. Kentucky Derby winner Rich Strike, who bypassed the Preakness, finished sixth.

Saturday’s running was the first Belmont Stakes run under normal conditions since the COVID-19 pandemic. It served as the first leg of the Triple Crown in 2020 and was reduced by a quarter-mile to 1-1/4 miles. Last year, COVID restrictions limited the Belmont Park crowd to just 11,238.

On Saturday, 46,301 attended the races. Upwards of 90,000 fans have attended the race in recent years. However, the recently opened UBS Arena at the Long Island track absorbed much of the space where fans congregated in the past. As a result, NYRA capped attendance this year at 50,000.

After last month’s Kentucky Derby produced record betting numbers, the subsequent legs both reported declines in handle. The Preakness Stakes three weeks ago saw a 5% dip to $65.3 million, and the 14-race card at Pimlico Race Course in Baltimore fell 8%, or nearly $9M, to $104.3 million.

Like the Belmont, the Preakness Stakes also reported a record handle in 2021.

While the lack of Triple Crown drama certainly played a role in wagering declines in the final two legs, there are likely other reasons for the Belmont Stakes card dropping by as much as it did.

Small field sizes may be to blame for some of the dropoff. The card featured nine stakes races, but those races included four entries in one race, five in three others, and six in another.

Mo Donegal came to the Belmont after a fifth-place finish in the Kentucky Derby. However, the Wood Memorial winner got a much-better trip this time around with Irad Ortiz Jr. aboard.

The Todd Pletcher-trained colt went outside in the final turn to take the lead and pull away. Mo Donegal scored a three-length win over Nest, a Pletcher-trained filly who overcame a slight stumble out of the gate.

Mike Repole, an entrepreneur behind Vitaminwater and BODYARMOR drinks and a native of nearby Queens, is a co-owner of the top two horses.

It’s a 40-year dream,” Repole said. “Coming to this track and Aqueduct, being a kid from New York, this is New York’s race… This was the biggest goal of my racing life, and I just accomplished it and I ran 1-2.”

Rich Strike started in the back of the pack as he did in the Derby five weeks ago. However, a slower pace on Saturday likely kept him from making a charge down the stretch.

The Derby winner also did not stay inside as he did in Louisville. That choice led to trainer Eric Reed second-guessing himself afterward.

“Our biggest change was deciding to stay a little off the rail and try to give him a good, open run where he could take off,” Reed said. “The whole way, his head turned and he was trying to get to the inside. I guess we made a mistake not putting him on the fence.”