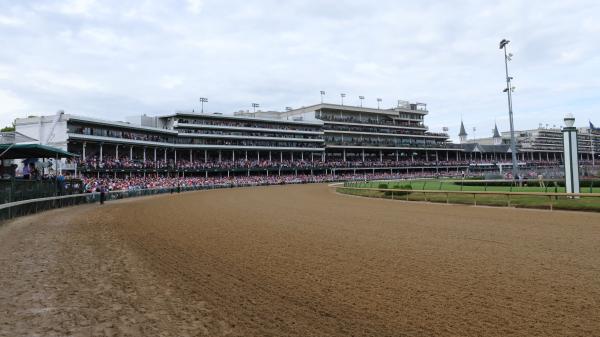 #9 Gunfighter: Tired late in his second career start and it clearly wasn’t his day out there as he never got involved and disappointed as a short-priced favorite. Following that defeat, Brad Cox has taken over the training duties on this colt and will be adding blinkers. The addition of blinkers could help get him more involved in the action early and has worked out time and time again for Cox clicking at a 27% rate through a large sample size.

He’s going to have to offer some value at post, and I’m not worried about that but I do think the change of scenery (both in track and a new barn) could help spark a big effort in here.

#4 Sandstone: I know it’s a fault to overvalue or judge a racehorse too favorably or harshly off one effort in particular, however her most recent outing versus stakes foes was breathtaking. Although it was versus a smaller field and she led every single step of the way, she looked extremely confident out there and put forth an impressive time of 1:44.18. She meets a much tougher field than she’s defeated in her two most recent races, but it does seem like the five-month hiatus between her debut and maiden win plus trying her luck routing has made a world of a difference for her.

Look for this filly to utilize her gate speed and control the tempo from the early break. I’ll be singling her in all my multi-leg wagers anticipating a very short price.

#1 Classic Causeway: What a fun and puzzling race to try and handicap – a route race with a full field of 14 juveniles. I went back and forth on a few options here, but ultimately landed on the rail starter. I love what we saw in his parimutuel debut: a dominant winner and he was wrapped up early down the lane. He followed that outing up in the Claiborne Breeders’ Futurity where he set the early fractions and ultimately was used far too hard early to sustain any type of late run.

This time around, he draws the inside post and I think could use that inside draw to his advantage to secure good positioning on the lead. In such a large field, a good trip is everything.

#6 Marissa’s Lady: Loved what I saw in her debut when she angled four wide down the lane and fought gamely to the finish line, where she was victorious in a head bob. With quite a bit of speed entered and horses likely green trying to vie for the front early on, I love how professional she looked in her one career start.

She isn’t the quickest of fillies in this race, but I do think as long as she can break from the gate cleanly and can work out a stalking trip with clear racing room, she can track them down late.