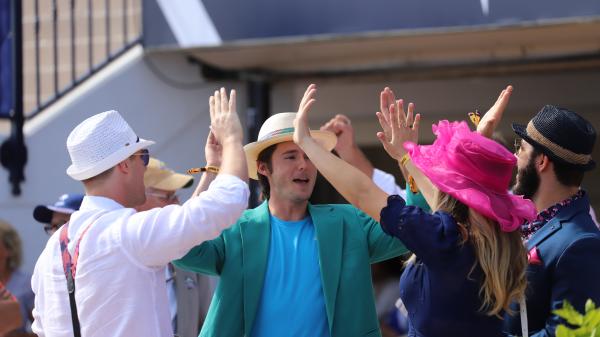 #3 Carronade: What a tough race to predict with all but one horse in here set to make their racing debut. When it comes to handicapping a race like this, I love to try and find some value of course, but most importantly factor post position in and weigh that heavily, along with trainer stats with first-time starters. It’s difficult enough to have a horse ready after 50 career starts, let alone the first one.

I landed on this runner who may go overshadowed by the other Pletcher starter. He’s not the most expensive horse in here but he looks to be one of the ones better-suited to the sprinting distance. He also draws a great post in the center of the gate, so pending a good break, he should be positioned well to hopefully show off some speed and avoid a traffic nightmare in deep stretch.

#1 American Monarch: He’s coming off his career best speed figure of 93 out of a difficult outside post where he just missed with a late rally after taking the lead in deep stretch. This was a great effort considering it was only his second start after a year away from racing and only his second try on dirt. Saturday, he draws inside and could use the rail post to his advantage to work out a perfect, stalking trip just behind some of the main speed.

He looks like the one to beat on paper and has the luxury of keeping Jose Ortiz on board who has been white-hot over the past week.

#3 Touch Code: He was second best in his career debut losing to a good one out of the Todd Pletcher barn in Emmanuel, who led every step of the way and drew clear in deep stretch. This colt rallied nicely after a slower-than-ideal break but made up a lot of ground late and was simply best of the rest.

On Saturday, he will have the opportunity to race on Lasix (furosemide) for the first time and is coming back very quickly on only a few weeks in between starts, which is usually a good indicator of fitness. Hoping for a cleaner break and maybe showing a bit more speed early.

#6 Ruvies in Time: Was claimed in her most recent start and is now entered versus an overall similar group for new connections and new trainer Rudy Rodriguez. In that prior effort, she went to the front end early on and sustained pressure and ultimately ended up fading late. That was her first start dropping back into the optional-claiming ranks in almost a year and returning to face off against easier could prove to be a recipe for success.

With Rodriguez’ numbers off the claim being as good as they are (24% for new recruits making their first start), she looks like a main player to pull off the upset.