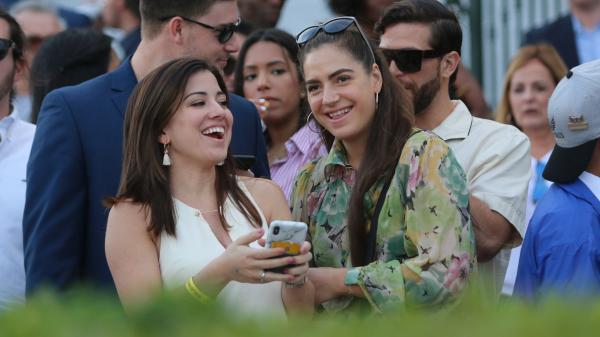 #8 Cricket West: This filly’s first start was easily her most impressive as she rallied off a wide trip and just missed right at the wire. Since then, she’s been stuck with some difficult draws and has gotten off to some slower starts versus much tougher competition than she will be up against on Saturday.

Although she does draw outside once again today and tries dirt for the first time, the drop down in class along with the addition of Lasix (furosemide) should have her a lot sharper. With quite a bit of early speed entered, she could really benefit from getting away in mid-pack and then making one late run once she’s within reach turning for home. I think she’s in with a great shot to run this bunch down late.

#8 Bustin Shout: He returned to the racetrack after 10 months away at the end of November and ended up tiring late versus a tougher overall group than he’ll face Saturday. He posted a similar outcome in his most recent effort, after faster fractions upfront caused him to fade back and finish well beaten on Dec. 10.

He gets another try on Saturday and takes a significant drop in class into the optional claiming ranks. He’s entered for a price tag and is reunited with jockey Kendrick Carmouche who really seems to get along with him well. If he can get to the front and rate well, I think he’s in with a great shot at pulling off the upset.

#6 No Nay Franklin: He broke a tad bit slow in his debut which I think could have been the difference in losing by a neck on turf. He followed that effort up trying his luck going a little bit longer in a race that was scheduled to be a turf start but was moved to dirt. He showed more speed there and did take the lead late in deep stretch only to be nabbed by a head right at the wire.

I like that he’s returning to the turf on Saturday and gets to try his luck racing a little bit longer. With more distance to cover, there won’t be so much of an emphasis placed on the break. I think he should offer some value as a win candidate as he looks like one of the main players.

#5 Park Avenue: She’s going to have to bring her “A-Game” and put forth her best career effort yet, but I do think she’s capable of pulling off the minor upset versus a bunch of quality stakes fillies.

She comes in riding a two-race winning streak and she’s looked so impressive in both back-to-back scores, starting with a maiden win in late October and then an allowance score on Dec. 12. She’s peaking at the absolute right time and I have every reason to believe that she’s fast and talented enough to match up well versus this established group.