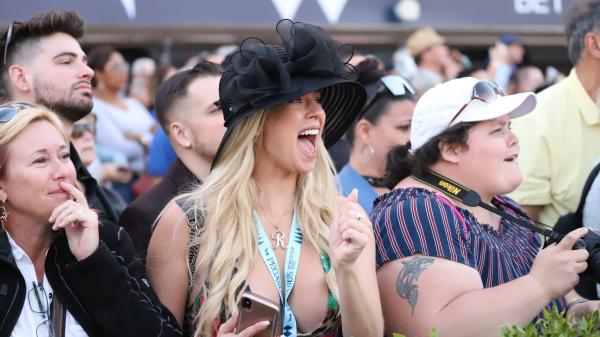 #4 Pipito: His first turf start was back in October with jockey Manny Franco on board. He showed off early speed and carried that a very long way but eventually ended up fading to finish fourth. He looked green on the front end and pumped up. That was also his first time trying blinkers.

On Saturday he will be racing with blinkers added again, and reunited with Franco. Here’s hoping the blinkers help with another quick break, and this gelding appreciates racing much shorter. If he can settle in nicely on the lead, I think he could be tough to pass late.

#1 Don’t Get Khozy: The Claiming Crown is a cool series at Gulfstream Park which allows some horses who have been competing within the claiming ranks an opportunity to race for some big money. This filly has been doing her best racing as of late, winning half of her races this year. She’s been great racing off stalking trips and on Saturday she draws a perfect post to sit just off the early speed and save some ground. There is more than enough speed entered which should create some good flow early on.

Although she’s 4-1 in the morning line, I expect much more value at post especially with others in here entering riding big winning streaks.

#3 Americanrevolution: His most recent start in the Empire Classic at Belmont Park was equally as visually impressive as it looks in the PPs. He dominated versus older rivals winning by almost 12 lengths. When jockey Luis Saez gave him a chance to run, he did exactly that.

When on his game, this colt looks like he can compete with anyone, and if his most recent race is any type of indicator, he’s been rapidly improving in each start. I think although he meets a very strong field, he’s going to be incredibly difficult to beat in here.

#9 Amendment Nineteen: I love that jockey Florent Geroux is racing at Oaklawn Park with this filly who he just rode to victory in her most recent outing. She was a comfortable winner last start and was able to draw clear late. She makes the logical move up to try her luck versus stakes company and should be beaming with confidence for trainer Brad Cox.

Despite drawing towards the outside in here, she doesn’t need the lead to win, and I think having options to win off different types of trips makes her even more dangerous to come right back and double-up in terms of victories.