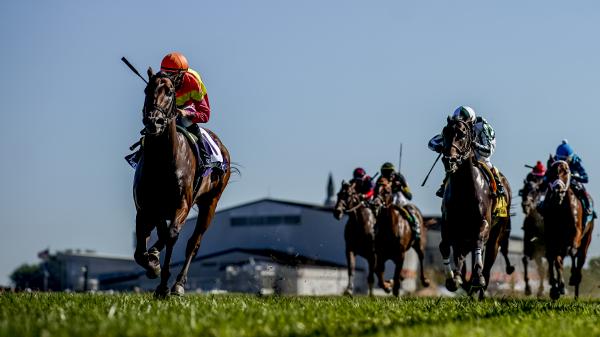 The Breeders’ Cup Challenge Series continues on Saturday with a deep and competitive renewal of the $1 million, Grade 2 FanDuel Turf Sprint Stakes at Kentucky Downs.

Picking the winner of the Turf Sprint is unlikely to be easy. It’s a “Win and You’re In” qualifier for the $1 million Breeders’ Cup Turf Sprint, so 15 horses (three of them on the also-eligible list) have been entered. The distance is three-quarters of a mile on the unique European-style turf course at Kentucky Downs, which some horses handle just fine, and some do not.

The 9-5 morning line favorite is #12 Arrest Me Red. At first glance, he seems like a great play. Trained by the red-hot Wesley Ward (a 27% winner at Kentucky Downs so far this meet), Arrest Me Red has won six of his nine turf starts, including five stakes. During the spring at Churchill Downs, Arrest Me Red was a decisive 1 3/4-length winner of the Grade 2 Twin Spires Turf Sprint Stakes Presented by Sysco, and he followed up with a half-length defeat in the Grade 1 Jaipur Stakes at Belmont Park.

But is Arrest Me Red unbeatable? Absolutely not. He’s never run at Kentucky Downs, so we don’t know how he’ll handle the course. Furthermore, drawing the outside post may force Arrest Me Red to sprint hard early to avoid a wide trip, setting the stage for a late runner to steal top honors in the final furlong.

We won’t oppose Arrest Me Red entirely, but we’ll narrowly favor the chances of #10 Totally Boss, a 7-year-old veteran who hasn’t run much at all in recent years.

Back in 2019, Totally Boss employed pace-pressing tactics to win the Turf Sprint by 1 1/4 lengths, showcasing an affinity for Kentucky Downs. But Totally Boss has only run seven times since 2019 Turf Sprint. His 2020 campaign was an 0-for-3 struggle, and he lost his lone start in 2021. For a time, it seemed as though Totally Boss would never recapture his best form.

However, Totally Boss has turned things around in 2022. The Rusty Arnold trainee kicked off the season with an eye-catching victory in an allowance-optional claiming race at Churchill Downs, surging from last place to win by 1 3/4 lengths. Then in the Twin Spires Turf Sprint Stakes at Ellis Park (not to be confused with the race of the same name at Churchill Downs), Totally Boss gobbled up ground late to finish fourth by less than a length.

Both of those races were contested at 5 1/2 furlongs, so Totally Boss is eligible to run even better while stretching back out to six furlongs (three-quarters of a mile). Arnold has won two of the last three editions of the Turf Sprint (also nabbing victory with Gear Jockey in 2021), and jockey Florent Geroux is reuniting with Totally Boss. Geroux rode Totally Boss to victory in this race three years ago and was also aboard for Totally Boss’s season-opening allowance win.

In short, there’s a lot to like about Totally Boss, including his 12-1 morning-line odds. If Totally Boss does indeed start at a double-digit price, he’s worth betting to win and playing on top of exotic wagers like the exacta and trifecta.

Who else should we play in the FanDuel Turf Sprint? #9 Front Run the Fed, a 15-1 longshot, is an enticing candidate. He was only beaten three lengths in the Grade 1 Fourstardave Handicap at Saratoga Race Course last month, even while racing at a one-mile distance longer than his best. Front Run the Fed finished second by a neck in the 2020 Turf Sprint and opened 2022 with a victory in the 5 1/2-furlong Van Clief Stakes on the Colonial Downs turf course, so cutting back to a sprint distance figures to produce a competitive effort from Front Run the Fed.

#2 Chewing Gum (5-1) offers appeal, too. His first career victory came at Kentucky Downs back in 2019, and he was in strong form last fall and winter, finishing third behind Arrest Me Red in a pair of stakes before winning the Grade 2 Joe Hernandez Stakes at Santa Anita Park. Chewing Gum recently returned from a layoff to finish fourth in the Grade 2 Connaught Cup Stakes traveling seven-eighths of a mile at Woodbine, and he may move forward while returning to Kentucky Downs for his second run of the season.

We’ve constructed a couple of different wagering strategies for the FanDuel Turf Sprint, depending on how much money you want to invest in the race: