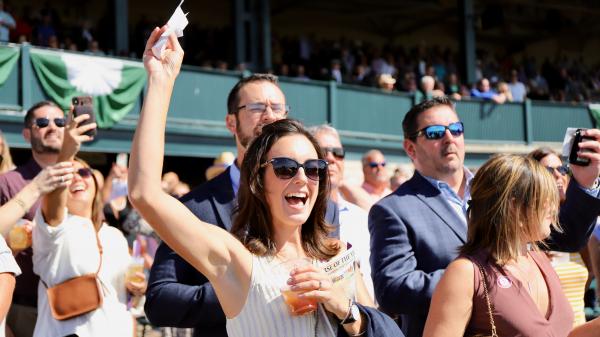 Betting a Longshot Exacta in the Darley Alcibiades Stakes

Of all the horse races taking place across North America this week, Friday’s $500,000, Grade 1 Darley Alcibiades Stakes on opening day at Keeneland has to rank among the most challenging to handicap.

The 1 1/16-mile prize for 2-year-old fillies awards a “Win and You’re In” berth to the Grade 1 NetJets Breeders’ Cup Juvenile Fillies at Keeneland four weeks from now. As a track-and-distance prep for the Breeders’ Cup, the Alcibiades holds plenty of appeal aside from its rich purse, and it’s also a Road to the 2023 Longines Kentucky Oaks prep race awarding 10 qualification points to the winner. It’s no wonder why a full field of 14 fillies has turned out for the Alcibiades.

Where do we even begin in sorting out the key contenders? We’ll start by acknowledging the talent and credentials of morning-line 7-2 favorite #9 Fun and Feisty, a Churchill Downs maiden winner who posted an eye-catching victory in last month’s Grade 3 Pocahontas Stakes on the Road to the Kentucky Oaks. Fun and Feisty benefited from a decelerating pace in the Pocahontas, but drew clear to win by 3 ½ lengths and may still have upside for trainer Kenny McPeek, whose five victories in the Alcibiades include two of the last four editions.

But McPeek is also slated to saddle #3 Stellar Lady, a 30-1 longshot with a chance to challenge. A pace-tracking maiden winner racing one mile over the Kentucky Downs turf course last month, Stellar Lady also showed promise in her lone dirt run to date, finishing second behind future Grade 1 Spinaway Stakes winner Leave No Trace in a summer maiden special weight at Saratoga.

Stellar Lady has the pedigree to handle dirt (her half-sister Killer Bird won a stakes over the surface), and accomplished Keeneland jockey Brian Hernandez Jr. is named to ride. We can’t dismiss Stellar Lady from win consideration.

Besides McPeek, the only other trainer to win the Alcibiades in the last four years is Brad Cox, who nabbed first prize with British Idiom (2019) and Juju’s Map (2021). His representative in 2022 is the undefeated #2 Chop Chop, who won her debut racing one mile over the Ellis Park turf course before nabbing the Aristocrat Gaming Juvenile Fillies Stakes over the same distance and surface at Kentucky Downs.

Chop Chop has never run on dirt, but her sire (City of Light) won the Grade 1 Breeders’ Cup Dirt Mile, so the surface switch shouldn’t be a major concern. Chop Chop has enough speed to be involved from the outset, and reigning Eclipse Award-winning jockey Joel Rosario is taking over the mount, so Chop Chop is another entrant with serious win credentials at 12-1 on the morning line.

But wait – we’re not done yet. #8 Infinite Diamond also offers appeal at odds of 10-1. After finishing second and fourth in her first two starts sprinting (including one defeat against future Grade 1 winner And Tell Me Nolies), Infinite Diamond stretched out over one mile for a maiden special weight at Gulfstream Park and led all the way to obliterate her pursuers by 14 ½ lengths. Infinite Diamond finished fast that day (running the final quarter-mile in :24.80) and will be dangerous if she puts up a similar performance in the Alcibiades.

We could go on and on listing viable contenders for top-four finishers in the Alcibiades. #1 Wonder Wheel (9-2)and #10 Kaling (6-1) have demonstrated Grade 1 ability by finishing second and third in the Spinaway at Saratoga. #11 Just Cindy (20-1) was beaten to sixth place after a poor start in the Spinaway, but previously won Saratoga’s Grade 3 Schuylerville Stakes in decisive fashion. #12 Take Charge Briana (15-1) boasts a beautiful pedigree and launched a big rally to break her maiden sprinting at Saratoga last month, #5 Xigera (5-1) was tons the best in a one-mile maiden special weight over the Saratoga grass, and #4 Raging Sea (6-1) got up to break her maiden sprinting seven-eighths of a mile on dirt at Saratoga.

The point in mentioning all these fillies is to showcase how the Alcibiades is an absolutely wide-open race. The potential for big payoffs is strong, but it could be easy to spend a lot of money and still not come up with a winning ticket.

Ultimately, we’re going to favor Chop Chop and Infinite Diamond on top of our tickets while leaning heavily on Stellar Lady underneath. The exacta will be our focus (and our only ticket if playing on a $12 budget), but we advise bettors with a bit more budget to shoot for a bigger score in the trifecta.