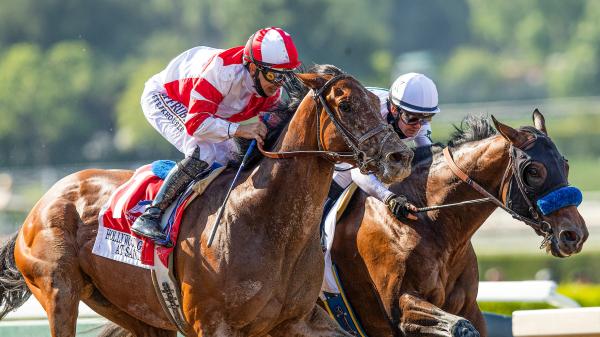 Betting a Pair of Upset Picks Over Flightline in Pacific Classic

The $1 million, Grade 1 TVG Pacific Classic Stakes Saturday at Del Mar, a “Win and You’re In” race for the Longines Breeders’ Cup Classic, didn’t draw a big field, but it drew a very strong field of six, featuring three millionaires and a budding superstar who can go over the $1 million mark in career earnings with a victory.

That budding superstar is Flightline, who is undefeated and untested in four starts to date, winning by a combined margin of 43 ½ lengths. Still, there are questions, as this talented colt is being asked to run around two turns for the first time and to run the mile and one-quarter distance for the first time. One of Flightline’s opponents that’s already proven at the distance is Country Grammer, who has banked over $10.8 million in his career, most of it earned when winning the Group 1 Dubai World Cup Sponsored by Emirates Airline in March. Country Grammer also won the Grade 1 Hollywood Gold Cup Stakes in May of 2021, which like the Dubai World Cup was held at the 1 ¼-mile distance of the Pacific Classic. Royal Ship missed by a head in last year’s Gold Cup behind Country Grammer and enters Saturday’s race off an easy win in the Grade 2 San Diego Handicap (defeating Country Grammer) over Del Mar’s dirt track. Express Train proved he belongs with these horses by winning the Grade 1 Santa Anita Handicap Presented by Yaamava’ Resort & Casino at 1 ¼ miles this past March. Extra Hope has never run the distance and his best career effort came when winning the Grade 3 Native Diver Stakes at Del Mar in the fall of 2020. Stilleto Boy earned his biggest win in the Grade 2 Californian Stakes in April, beating Express Train, but he has only managed fourth- and third-place efforts since and has never finished better than third at this classic distance.

Before I get to Flightline, I want to talk about Royal Ship and Country Grammer. These two have met three times previously, with Country Grammer coming out on top once (in the 2021 Hollywood Gold Cup) and with Royal Ship coming out on top twice. The first of those two occasions was in the 2021 Californian Stakes, where the two horses battled head-and-head for the entire last eighth of a mile, and the second was at the end of July, a little more than a month ago, when Royal Ship drew off with authority to win the San Diego Handicap. In the 2021 Gold Cup as well as in the recent San Diego, Royal Ship earned and then tied career-best 110 Equibase Speed Figures, the same figure Country Grammer earned in his Hollywood Gold Cup victory in May 2021. Country Grammer bettered that figure this February when second in the Saudi Cup with a 117 figure, and then earned one of the top figures this year, 128, when winning the Dubai World Cup one month later. However, he only managed a 106 figure in the San Diego Handicap.

One of the more important considerations is that in the San Diego, both horses were coming back from layoffs, with Royal Ship having been off two months and Country Grammer having been off four months. Given that both are making their second starts off layoffs in Saturday’s Pacific Classic, it is reasonable to assume they can improve at the same rate. That being the case, Royal Ship will be my top selection to win this year’s Pacific Classic, particularly as his three workouts since the San Diego Handicap have been nothing short of spectacular. Considering Hall of Fame trainer Richard Mandella is not known for fast workouts, the fact the horse put in a 46.2 half-mile drill (best of 80) on Aug. 11 and a 47.4 workout at the same distance on Aug. 28 (sixth best of 77) strongly suggests Royal Ship is going to run even better than he did earlier this summer at Del Mar. That being said, I also expect Country Grammer to run strongly, which could lead to a head-and-head battle down the length of the stretch as occurred when they met in the Hollywood Gold Cup in 2021.

Now, about Flightline. There is no doubting his innate athletic ability, and in four races he has not given another horse even the slightest chance to win in the last quarter mile. He won the Malibu Stakes in December 2021 with a 126 figure which is pretty unheard of for a 3-year-old, and when coming back from nearly six months off in the Hill ‘n’ Dale Metropolitan Handicap in June, Flightline earned a 114 figure which could have been higher as he coasted home easily. Still, Flightline has never run around two turns and the farthest he has run is one mile around one turn. There’s an old maxim in handicapping that one should never bet a favorite (which Flightline will be) trying something for the first time, and I plan to stick to that rule. As a son of Tapit there is little doubt a mile and one-quarter is in his pedigree, but when I consider the 127 and 126 figures he earned last September and December are the same as the 128 figure Country Grammer earned winning the Dubai World Cup in March – and then consider that the World Cup was run at the 1 ¼-mile distance of the Pacific Classic – I have to believe Country Grammer is more likely to win than Flightline. As I also believe Royal Ship is more probable to win than Country Grammer, I am left with no other choice than to believe no matter how talented Flightline is, he has his work cut out for him in the Pacific Classic.

The other three Pacific Classic entrants, with their best figures, are Express Train (110), Extra Hope (111) and Stilleto Boy (117).