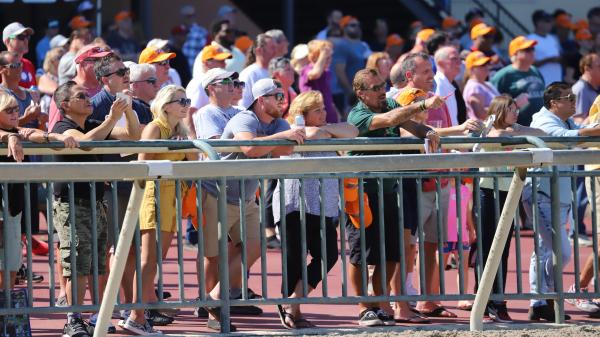 On Saturday at Parx Racing, 11 talented 3-year-old Thoroughbreds will square off going 1 1/8 miles in the $1 million, Grade 1 Pennsylvania Derby.

Three out of the last seven editions of the Pennsylvania Derby have been won by Hall of Fame trainer Bob Baffert, which bodes well for the chances of #8 Taiba. Remember the headlines Taiba made during the spring? After dominating his sprint debut at Santa Anita by 7 1/2 lengths, Taiba came back one month later to post an upset in the 1 1/8-mile Grade 1 Runhappy Santa Anita Derby on the Road to the Kentucky Derby Presented by Woodford Reserve, defeating graded stakes winner Messier by 2 1/4 lengths.

Taiba’s Santa Anita Derby triumph was massive. Not only did Taiba successfully handle a huge step up in class and distance, he ran fast while doing so, earning a 111 Brisnet Speed rating that tops the Pennsylvania Derby field.

Given 2 1/2 months to recover from the Kentucky Derby, Taiba returned to action in the July 23 Grade 1 TVG.com Haskell Stakes and ran a giant race in defeat. Taiba looked like a winner while rallying wide down the homestretch, only to get outkicked by the ground-saving #5 Cyberknife. The latter had the benefit of a prep victory in the Grade 3 Matt Winn Stakes, so Taiba — entering after a layoff and losing ground around the final turn — ran admirably to finish second by a head.

Who are the other key contenders? Obviously the above-mentioned Cyberknife warrants respect. A clear-cut winner of the Grade 1 Arkansas Derby during the spring, Cyberknife struggled when finishing 18th in the Kentucky Derby, but he bounced back with tenacious victories in the Matt Winn and Haskell.

Cyberknife could have seized division leadership in the Grade 1 Runhappy Travers Stakes at Saratoga last month. While he proved no match for runaway winner Epicenter, Cyberknife fought on gamely from a pacesetting position to hold second place by a nose over #1 Zandon. The Travers took place at 1 1/4 miles, so cutting back to 1 1/8 miles — the distance of Arkansas Derby and Haskell — should suit Cyberknife to perfection.

We also have to give Zandon a look. The third-place finisher from the Kentucky Derby has never finished out of the top three, even while competing in a bevy of important Grade 1 and Grade 2 stakes. He was an impressive stretch-running winner of the Grade 1 Toyota Blue Grass Stakes during the spring and nearly caught Cyberknife for second place in the Travers, so Zandon looms as the main danger from off the pace in the Pennsylvania Derby.

Taiba, Cyberknife, and Zandon appear to rank a cut above their remaining rivals in the Pennsylvania Derby, so we’ll take a simple and bold approach to betting the race. If you’re playing on a small budget (say, $10), we recommend betting Taiba over Cyberknife in the exacta. Bettors with more capital to spend (say, $30) can add a cold Taiba/Cyberknife/Zandon trifecta to the mix.