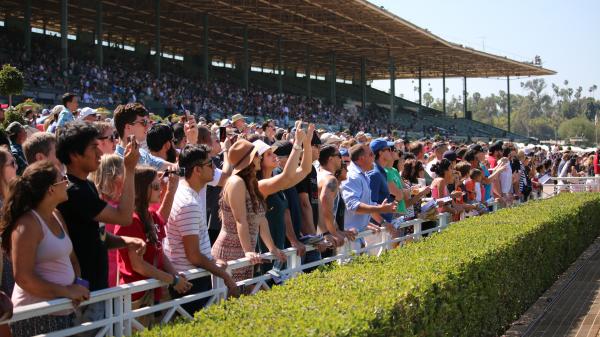 Betting on Speed in the 2023 Sham Stakes

The Road to the Kentucky Derby Presented by Woodford Reserve continues on Sunday with the running of the $100,000, Grade 3 Sham Stakes at Santa Anita Park. Considering that veterans of Santa Anita’s preps for the Grade 1 Kentucky Derby have won five of the last 20 editions of the “Run for the Roses,” it pays to keep an eye on the action in California.

No trainer has enjoyed more success in the Sham than Bob Baffert. The Hall of Fame conditioner has won the last three editions of the Sham… and four of the last five… and five of the last seven… and six of the last nine. All told, Baffert has won the Sham eight times, including six out of 11 editions since it adopted its current distance and date (one mile in early January) in 2012.

There’s a good chance Baffert will pick up a ninth Sham victory on Saturday. Only six horses have been entered, and Baffert trains four of them, led by the proven Grade 1 competitor #2 National Treasure.

National Treasure showed promise against tough competition last year. In his debut sprinting at Del Mar, National Treasure wired a quality field by 1 ½ lengths, counting future Grade 2 Los Alamitos Futurity winner Practical Move among his beaten rivals. National Treasure then stretched out over 1 1/16 miles for a pair of top-level Road to the Kentucky Derby qualifiers, running second in the Grade 1 American Pharoah Stakes behind Cave Rock and third in the Grade 1 FanDuel Breeders’ Cup Juvenile Presented by TAA behind Forte and Cave Rock.

Forte and Cave Rock have both won multiple Grade 1 races, so only tried-and-true elite racehorses have managed to defeat National Treasure so far. With Brisnet Speed ratings of 90, 101, and 96 under his belt, National Treasure is a fast and proven colt seemingly poised for a productive three-year-old season.

So National Treasure is a lock to win the Sham, right? Well… it might not be that simple. He does hold a meaningful Brisnet Speed rating edge over stablemates #1 Newgate and #4 Reincarnate, but his third stablemate – two-time stakes winner #3 Speed Boat Beach – may be capable of giving National Treasure a run for the money.

Speed Boat Beach has spent his last three starts competing on turf, so direct comparisons to National Treasure are difficult. Speed Boat Beach won the Speakeasy Stakes sprinting five-eighths of a mile at Del Mar, then bounced back from a fading ninth-place finish in the Grade 1 Breeders’ Cup Juvenile Turf Sprint to win the one-mile Grade 3 Cecil B. DeMille Stakes by half a length.

These efforts weren’t especially fast from a Brisnet Speed rating perspective, but back in September, Speed Boat Beach showed remarkable talent in a maiden special weight sprinting 5 ½ furlongs over the Del Mar dirt. After dashing to the front through blazing fractions of :21.34 and :44.17, Speed Boat Beach stayed on strongly to defeat future Grade 1 American Pharoah Stakes third-place finisher Hejazi by 1 ¼ lengths in the track-record time of 1:01.86.

Speed Boat Beach has trained strongly over the Santa Anita dirt since winning the Cecil B. DeMille, breezing half a mile in 47 seconds and six furlongs in 1:12.20. Both of those exercises were the fastest of their respective mornings and distances. Speed Boat Beach figures to relish returning to dirt for the Sham, opening the door for a mild upset against National Treasure.

Rounding out the Sham field are #5 Packs a Wahlop and #6 Spun Intended. Packs a Wahlop won the Grade 3 Del Mar Juvenile Turf Stakes and Grade 3 Zuma Beach Stakes on grass before finishing eighth in the Grade 1 Breeders’ Cup Juvenile Turf, but his lone dirt run to date produced a non-threatening fourth-place finish, so switching surfaces is a question mark.

As for Spun Intended, he was beaten half a length in his debut sprinting 6 ½ furlongs at Santa Anita, then came back to trounce a similar race over the same distance at Del Mar by 6 ½ lengths. Spun Intended’s runaway maiden victory produced a promising 95 Brisnet Speed rating, and a series of fast workouts since then suggest a top-three Sham finish is well within reach.

So how should we bet the Sham? We’ll take a stand betting Speed Boat Beach on top of all our tickets. For second place, we’ll use National Treasure, and we’ll round out our plays with Spun Intended.