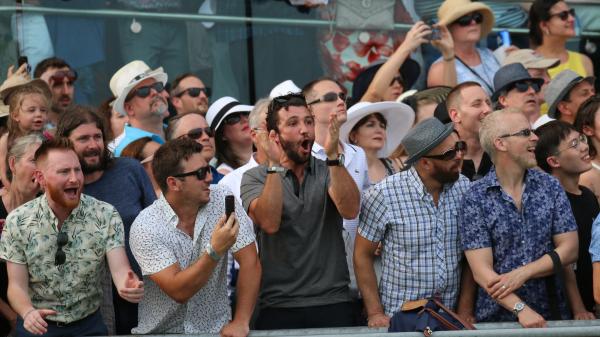 It’s hard to fathom how much history lies behind the $1 million Queen’s Plate Stakes, scheduled to be run this Sunday at Woodbine. Canada’s equivalent to the Kentucky Derby Presented by Woodford Reserve has been contested every year without a miss since its inaugural running in 1860, which means this year’s renewal represents the 163rd edition of the prestigious race.

The Queen’s Plate is open to 3-year-old Thoroughbreds foaled in Canada and takes place over 1 ¼ miles on Woodbine’s synthetic Tapeta main track. A large field is typical for the Queen’s Plate, and 11 horses will compete on Sunday.

The 5-2 morning line favorite is #8 Moira, the lone filly in the field. Bettors familiar with Kentucky Derby history might assume Moira is at a disadvantage, considering only three fillies have won the Derby in 148 years. But fillies have won a staggering 37 editions of the Queen’s Plate, and four have visited the winner’s circle in the last dozen years.

These stats bode well for Moira, as does her pedigree. The bay filly is a daughter of Ghostzapper, winner of the 2004 Eclipse Award for Horse of the Year. Ghostzapper has already sired two Queen’s Plate winners (Shaman Ghost and the filly Holy Helena), so Moira is bred to thrive in Canada’s greatest race.

Moira has already shown significant talent in four starts at Woodbine. She debuted in the 1 1/16-mile Princess Elizabeth Stakes last fall and unleashed a terrific rally from off the pace to dominate by 4 ¼ lengths. It’s rare to see a horse debut in a stakes, let alone win, but Moira made the task seem easy.

A close runner-up finish in the Grade 3 Mazarine Stakes concluded Moira’s brief juvenile campaign, and she’s been unstoppable since returning to action at age three. In the Fury Stakes sprinting seven-eighths of a mile, Moira rallied to win by a head. Benefiting from this season-opening sprint sharpener, Moira stretched out over 1 1/8 miles for the Woodbine Oaks Presented by Budweiser on July 24 and promptly obliterated her pursuers by 10 ¾ lengths.

The Woodbine Oaks serves the first leg of the Canadian Triple Tiara, a Triple Crown of sorts for Canadian-bred fillies. The second leg is the Bison City Stakes, and Moira’s runaway romp in the Woodbine Oaks was flattered when distant runner-up Sister Seagull returned to win the Bison City.

Moira probably had a serious chance to sweep the Canadian Triple Tiara, but instead her connections (including hot trainer Kevin Attard) have opted to face males in the Queen’s Plate. Their choice makes perfect sense when you consider how fast Moira ran in the Woodbine Oaks. A sweeping rally from off the pace carried Moira to a final time of 1:49.78; for comparison, the gelding #10 Sir for Sure required 1:50.62 to win the Plate Trial Stakes earlier in the afternoon.

Moira would likely be a heavy favorite to win the Queen’s Plate if not for the presence of #6 Rondure, her most formidable rival and arguably the most accomplished horse in the field. Rondure showed little as a juvenile, failing to finish better than fifth in a pair of maiden sprints, but the son of Preakness Stakes winner Oxbow has been a different horse since returning to action at age three.

First, Rondure smashed a maiden special weight field sprinting seven-eighths of a mile at Woodbine by 10 ¾ lengths. Then he tackled the Queenston Stakes over the same track and distance, failing by only a head to rally and catch #4 The Minkster.

Rondure finally stretched out beyond a sprint distance in the 1 1/16-mile Grade 3 Marine Stakes at Woodbine, a race open to all 3-year-old Thoroughbreds regardless of where they were foaled. Rondure wasn’t favored to win, but he ran like an odds-on favorite, tracking a slow early pace before surging away to score by 5 ½ lengths.

As far as Brisnet Speed ratings are concerned, Moira and Rondure are similarly fast horses. A showdown in the Queen’s Plate could go either way. Choosing between them won’t be easy.

Then again, why choose? The field is large and so are the expected betting pools, so if we play exotic wagers (like the exacta, trifecta, and superfecta) counting on Moira and Rondure to run 1-2 in either order, we’ll still have a chance to bring home profitable payoffs.

Beyond the two favorites, #5 Duke of Love is an obvious contender. The Marine Stakes runner-up ran into significant traffic trouble down the homestretch of the Plate Trial Stakes, so his fourth-place finish can be excused.

But if we like Duke of Love, we must also respect the chances of #3 Ironstone, who has cracked the trifecta in seven consecutive stakes at Woodbine. He employed pacesetting tactics to finish third in the Marine, coming home only a neck behind Duke of Love, and he also ran respectably to finish third by a neck against The Minkster and Rondure in the Queenston.

We can’t dismiss #10 Sir for Sure from contention either. His victory in the Plate Trial came in the form of a 21.85-1 upset over #1 Hall of Dreams, but Sir for Sure is 2-for-2 running longer than one mile over the Woodbine Tapeta, so there’s a chance he’ll relish stretching out over 1 ¼ miles in the Plate Trial. It’s worth noting Sir for Sure is a son of Sligo Bay, who previously sired 2014 Queen’s Plate winner Lexie Lou.

Depending on how much budget you’ve allocated for betting the Queen’s Plate, here are three different wagering strategies to consider:

Wagering Strategy on a $24 Budget

Wagering Strategy on a $50 Budget