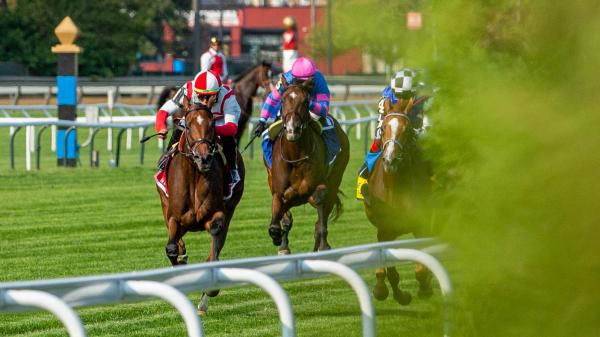 Betting the ‘Best’ Filly in the 2022 Miss Grillo Stakes

Saturday is shaping up to be a big day of racing at “Belmont at the Big A,” a meeting in which traditional Belmont Park races are being hosted by Aqueduct as the former completes a construction project. Four graded stakes worth a combined $1.4 million are slated to be held, and while the $200,000, Grade 2 Miss Grillo Stakes isn’t the most prestigious race on the card, it figures to have a profound influence on the Breeders’ Cup World Championships five weeks from now.

Half a dozen 2-year-old fillies have been entered in the 2022 Miss Grillo, and #6 Be Your Best looks like a possible standout. The Irish-bred filly is unbeaten and essentially unchallenged in two starts for trainer Horacio De Paz, suggesting she has more to offer in her toughest test to date.

Be Your Best started her career on a bright note in a 1 1/16-mile maiden special weight race on grass at Saratoga Race Course. Overlooked at odds of 8.90-1, the bay filly produced a big rally from behind a modest pace, sweeping past the leaders to dominate by 3 1/4 lengths over a field containing next-out winner and Miss Grillo entrant #2 Free Look.

Toward the end of the Saratoga meet, Be Your Best returned to action in the P.G. Johnson Stakes racing 1 1/16 miles on turf, and again she left no doubt about her superiority. Showing more early speed while tracking the pace over a rain-dampened course rated as “good,” Be Your Best took command in the stretch and forged away to prevail by 3 3/4 lengths.

As the only stakes winner in the Miss Grillo field, Be Your Best is a standout as far as accomplishments are concerned. Her versatility in regard to running style also is a positive, as is the fact she’s held the lead an eighth of a mile from the finish line in both of her starts. Be Your Best isn’t a one-dimension late runner who relies on the leaders to tire before taking command; she’s capable of launching early rallies and sustaining them through the homestretch, which is no easy feat.

If we trust Be Your Best to keep her momentum going in the Miss Grillo, then betting the race becomes a relatively straightforward proposition. With only five other runners to analyze, hitting exotic wagers like the trifecta and superfecta should be manageable on modest budgets.

Beyond Be Your Best, the above-mentioned Free Look is a key contender. Free Look unleashed a sharp rally to finish third in her debut behind Be Your Best before delivering an impressive victory in a similar 1 1/16-mile maiden special weight race at Saratoga Sept. 4. Rallying from midfield behind a quick pace, Free Look was well in front by the eighth pole and ultimately cruised home on top by 2 1/2 lengths.

Free Look is trained by Chad Brown, whose eight victories in the Miss Grillo include four with fillies who came back to win the Breeders’ Cup Juvenile Fillies Turf. Whenever Brown saddles a starter in the Miss Grillo, it’s wise to take notice, especially when a high-percentage turf jockey like Flavien Prat is named to ride.

#4 Alluring Angel is another logical threat. She produced a giant late charge to win her debut sprinting on the Saratoga grass, then came up just a nose short when second in the Untapable Stakes on the European-style turf course at Kentucky Downs. Alluring Angel’s promising form against stakes competition is encouraging, though she’s yet to race farther than 6 1/2 furlongs, and stretching out in distance is a new obstacle she’ll have to conquer.

In contrast, 1 1/16 miles is nothing to fear for #3 Pleasant Passage, who won her debut at this distance at Saratoga. On that occasion (her lone race to date), Pleasant Passage rallied up the inside to score by a neck. As a daughter of More Than Ready, the sire of two Breeders’ Cup Juvenile Fillies Turf winners, out of a mare by War Front, Pleasant Passage is bred to mature early and excel as a grass miler, so she has upside for improvement under three-time Eclipse Award-winning jockey Irad Ortiz Jr.

So how should we bet the Miss Grillo? Let’s start by keying Be Your Best on top of all our tickets. Then we’ll count on Free Look to finish either second or third while adding Alluring Angel and Pleasant Passage for the remaining positions on our tickets.