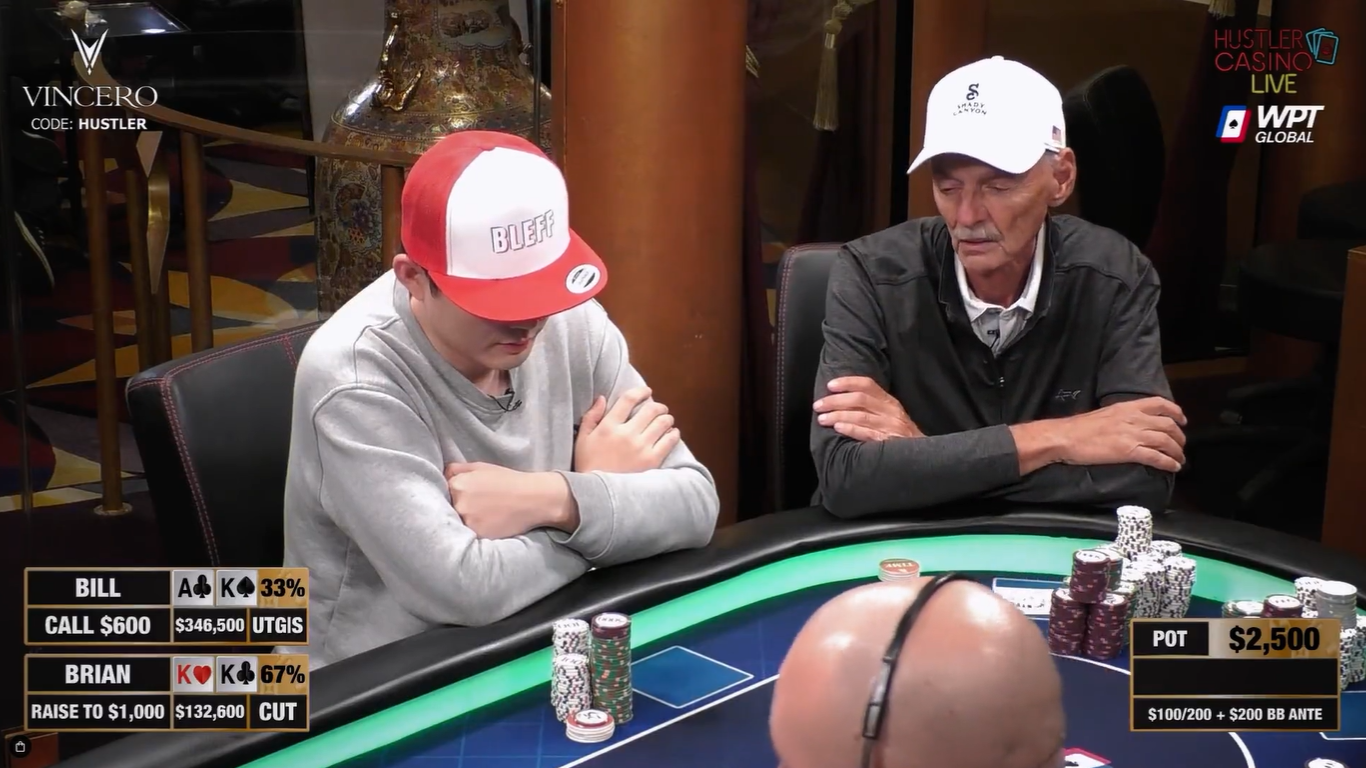 Businessman Bill Klein made one of the most memorable bluffs in Hustler Casino Live history Friday night to win a massive pot.

Klein, a regular in the high-stakes community but a recreational player, has long had a tight image at the table. His range exceeds aces and kings, but he’s certainly no Alan Keating.

With a $400 staddle on, Brian Kim, who finished fourth in the World Poker Tour Five Diamond at Bellagio last week, raised to $1,000 from the cut-off with

Action folded over to Klein in the straddle, who played it passively and just called with

. The flop came out

and it was checked over to the preflop raiser who bet $1,600, and he received a call.

paired the board on the turn, Kim continued to build the pot, this time wagering $4,000. Not a believer, Klein made the call and saw the

on the river. He made a surprising decision to lead out, putting $13,000 into a pot of about the same size.

Kim, only worried about his opponent having a 5 or pocket 10’s, sensed he was in great shape, so he went for a raise to $50,000, leaving around $77,000 behind. Klein, who had him covered, shocked Hustler Casino Live commentator Marc Goone when he three-bet it to $127,000, a gutsy play from a player who isn’t known for making such moves.

On the surface, it appeared that Kim, with the over-pair, had an easy call to make. After all, he was getting 2.5-1 on his money and was only beat by a few possible types of hands. But this is where the wealthy Klein was able to use his tighter image and bankroll to his advantage. Regardless of the pot odds and strength of his hand, Kim was facing a wager for a significant amount of money against a player he likely knew doesn’t three-bet jam rivers without the nuts often, if ever.

After tanking for a couple of minutes, he eventually folded the best hand. Klein showed the bluff and Kim sat in stunned silence. “That was the most ridiculous hand I’ve ever seen,” one player at the table said. It was definitely an exciting hand, but not even close to the most “ridiculous hand” on Hustler Casino Live lately, let alone ever. That title goes to the Robbi-Garrett hand on Sept. 29, which just might be the craziest hand in poker history.

Still, Klein deserves a hat tip for pulling off one of the most impressive bluffs in recent memory. He’d go on to finish the six-hour stream with over $280,000 in profit, far and away the most at the table. Kim, on the other hand, took a small $6,800 loss.