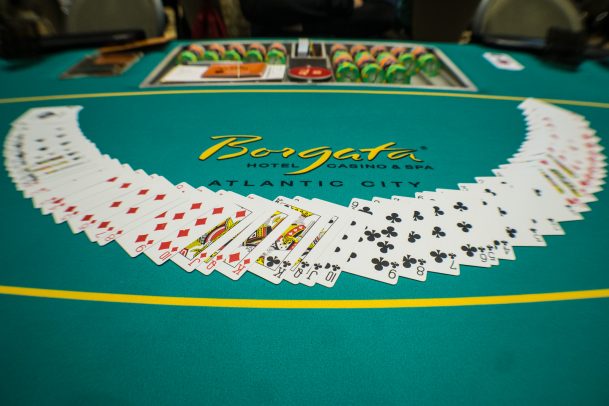 A major poker tournament is returning to Atlantic City this winter, marking a return of big buy-in events for players who happen to live near the “Monopoly City.”

Big buy-in poker returns to the Borgata in January. (Image: The Borgata)

“The Return: A Borgata Championship Event” starts January 2, with a $1 million guaranteed mystery bounty event where players draw envelopes after they eliminate opponents after a certain round. One of those envelopes will have the top bounty of $250K.

BetMGM in New Jersey, which runs both Borgata’s online poker room and PartyPoker NJ, and shares player pools, is a co-sponsor of the event. Online qualifiers will soon be spread on the sites. More details are coming, but players can begin signing up for the events through the BetMGM poker app in New Jersey starting December 1, making it likely that online qualifiers will start shortly. Live registration begins January 1.

“The return of championship poker to Borgata is a long time coming,” said Vincent Alonge Jr., Borgata’s Director of Poker Operations in a press release. “Borgata is the premier gaming destination on the East Coast, which includes best-in-class poker tournaments.”

While live poker tourney action is bouncing back in spots all across the US, players in the Northeast have had to gas up and point their cars to places like South Florida, Michigan, North Carolina, and Oklahoma if they wanted to play in events with four-figure or more buy-ins.

The World Poker Tour is celebrating its 20th season in 2022, but hasn’t scheduled a tourney around the major cities of New York, Philadelphia, Baltimore, or DC since 2021. That event, the $3,300 WPT Maryland at Live! Casino in Hanover, was canceled.

The World Series of Poker Circuit series have also essentially stayed out of the area. Besides a stop at Turning Stone Casino in New York in March, there’s been no other WSOP Circuit series in the Northeast part of the country.

The closest stop has been at Harrah’s Cherokee in North Carolina, which saw the WSOP visit three times in 2022.

Meanwhile, players in the midwest have plenty of opportunities to try their hands at events with six-figure or (much) more guarantees. And the players are showing up in droves. For example, the Mid-Stakes Poker Tour $1,100 Michigan State Poker Championship attracted 2,409 entrants who generated a top prize of $344K.

It’s nice to see coordination with BetMGM and the Borgata spreading online qualifiers, but it remains a mystery why WSOP.com refuses to do the same. The site simply doesn’t run satellites into its live Circuit events in the four states in which it operates online rooms.

In fact, the WSOP has yet to hold live Circuit events in two of these states, despite having casinos in them (Pennsylvania and New Jersey).

Harrah’s Philadelphia closed its poker room in mid-2020, and while Caesars Atlantic City does have a poker room, the only Circuit events that take place in these two locales only happen online.

1. ‘The Return’ Brings Big Buy-In Poker Tourneys Back to Borgata in January