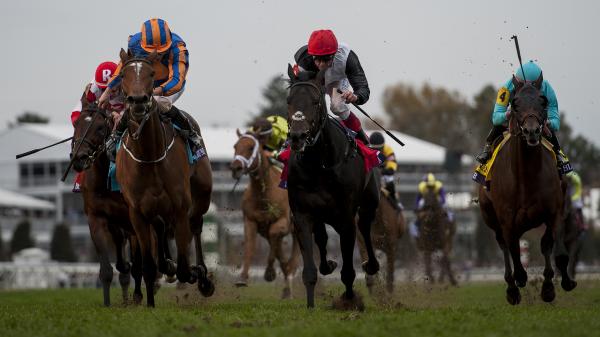 Entering the 2015 Breeders’ Cup World Championships, the first ever at Keeneland Race Course in Lexington, there were no shortage of compelling storylines, including the first Triple Crown winner since 1978, American Pharoah, attempting to close out his career with a win in the Breeders’ Cup Classic.

One major storyline with a distinctly European flavor was 2015 Qatar Prix de l’Arc de Triomphe winner Golden Horn bidding for his seventh win in his eighth start of the year in the Longines Breeders’ Cup Turf. The Cape Cross colt was attempting to become the first horse to complete the Arc-Breeders’ Cup Turf double in the same year.

Golden Horn had been absolutely dominant in 2015, winning the Investec Epsom Derby and Coral-Eclipse Stakes by 3 ½ lengths, taking the Irish Champion Stakes by a length, and powering to a two-length triumph in the Arc 27 days before the Longines Turf at Keeneland.

To say Golden Horn appeared formidable entering the 2015 World Championships would be an understatement, but Thoroughbred racehorse trainers know better than to take anything for granted and as the race approached, trainer John Gosden worried that inclement weather in Lexington would saturate the ground at Keeneland. He had hoped for firm turf for Golden Horn.

Two inches of rain in the days leading up to the event added to Gosden’s anxiety.

“I did have grave concerns about the ground before the race, how loose it was riding,” Gosden told BloodHorse.

Further complicating matters was the fact that the entrant Gosden viewed as Golden Horn’s chief opposition, 3-year-old filly Found, had done her best running that year on soft turf, winning a Group 3 race at the Curragh in August and then coming up just a length short of Golden Horn in the Group 1 QIPCO Irish Champion Stakes at Leopardstown, both on turf rated soft.

Of course, while the Aidan O’Brien-trained Found was helped by Mother Nature, she had shown her mettle through a testing campaign. The Turf would be her eighth race of the year and her fourth start against males in seven weeks. She was a Group 1 winner at two, but she had not duplicated that feat as a 3-year-old.

After she finished a nonthreatening ninth on firm turf in the Arc de Triomphe, she bounced back to finish second in the QIPCO Champion Stakes on good to soft ground Oct. 17 at Ascot. O’Brien needed some convincing to take a shot two weeks later with the Galileo filly in the Breeders’ Cup.

“The lads made the decision to run [in the Turf]. I thought it was a bit far-fetched,” O’Brien told BloodHorse after the race. “She’s a 3-year-old filly and after running in two champion stakes and the Arc within a month. But she didn’t have the look of any of those races. She is a very special filly.”

By the time the Turf got underway at 4:57 p.m. ET, the turf had been upgraded to good and Golden Horn was pegged as the 4-5 favorite. U.S.-based multiple Grade 1 winner Big Blue Kitten was the second betting choice at 5.80-1, followed by popular Arlington Million Stakes winner The Pizza Man at 6.10-1, and Found at 6.40-1. The other eight runners were all 8-1 or higher.

Golden Horn broke alertly and was right up near the front shortly after the start of the Turf, but that did not last long as pacesetter Shining Copper, Big Blue Kitten’s stablemate, made certain of a solid pace by opening up a 20-length lead through a mile in 1:39.07. The field began to catch him in nearing the final turn, however, and Golden Horn seized command at the quarter-pole with Found on his outside flank. Golden Horn accelerated clear, but only temporarily as the 3-year-old filly found another gear. With a sixteenth of a mile left, it was clear that Found was finishing faster and she steadily pulled away to prevail by a half-length in 2:32.06, making Golden Horn the seventh straight Arc de Triomphe winner to fail in a bid to win the Turf in the same year.

“She is the one I’d feared and the American horse (Big Blue Kitten) in third, so they were all there,” Gosden continued. “She is a lovely filly and she handled it better than us, but she’s bred to do so, isn’t she?

“The time indicates how loose it is. He’s run a super race, but he struggles on it.”

Golden Horn won the Cartier Award as Europe’s Horse of the Year in 2015.

For Found, the victory served as a springboard to another terrific campaign in 2016, in which she would win the Arc de Triomphe by 1 ¾ lengths before also coming up short in her quest for the Arc-Turf double when third to Highland Reel at the 2016 World Championships. Found finished in the top three in 20 of her 21 career races, which included six wins and 11 starts in Group 1 races against older males.

“Aidan at the beginning of the year always said this is our Arc filly, and he was very positive about her,” co-owner Michael Tabor said, prophetically, after the 2015 Turf. “She’s come as good as Aidan always said she would. When Aidan says that to you, it comes right. It might not happen just when he expects it to, but eventually it will happen because he knows the difference.”