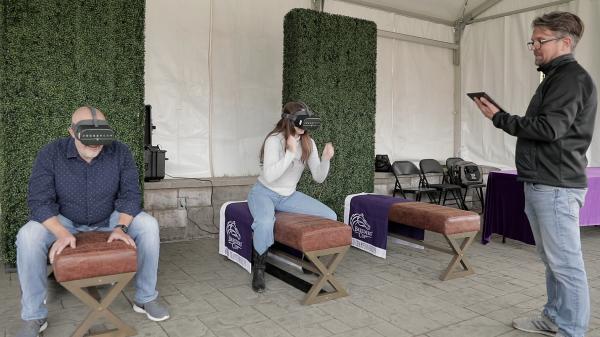 We’ve all been there — watching a game in awe of the athletes and their amazing feats. We’ve wondered what it would be like to soar through the air like LeBron James or crush a massive home run like Aaron Judge or sling a side-arm pass for a touchdown a la Patrick Mahomes.

Then we head to the backyard, a local park, or rec league and do our best imitations. If that doesn’t scratch the itch, there are video games that allow us to try to recreate those exploits.

But unlike most sports, Thoroughbred horse racing does not lend itself to casual competition. Weekend warriors won’t be racing against friends down the stretch at Keeneland or any other world-class track.

That lack of access and relatability can hinder people from developing an affinity for the sport. But thanks to a United Kingdom-based company, Equine Productions, fans can get a feel for what it is like to race a Thoroughbred in competition.

The Breeders’ Cup JockeyCam VR Experience allows users to put on a virtual reality headset, sit in a seat developed for this experience, and, at least visually, feel like a jockey.

Fans at Keeneland Nov. 4-5 for the Breeders’ Cup will have the opportunity to try the VR experience minus the specialized seat. Equine Productions will be set up behind the grandstand just beyond the paddock. Connections to the horses can get a taste Nov. 3.

“I think this is the closest thing that we can get to [giving] someone not from the sport or had anything to do with the sport, the feeling of what it’s actually like to ride in a real race,” said company co-founder Nathan Horrocks. His ties to the sport run deep. His grandfather and father were both jockeys and he was a steeplechase jockey for 10 years.

Equine Productions is the same company that developed the JockeyCam that is seen during racing broadcasts on NBC and FanDuel TV. It is the precursor to this VR experience. The difference is while the JockeyCam only provides the viewer with the same perspective as the rider, the VR effort gives a 360-degree view.

While the virtual race is predetermined, fans will get a different experience depending upon which horse/jockey tandem with whom they are paired.

“It was great. It was just like being on a horse,” Maldonado said. “It gives people a chance to see our point of view. It was very realistic. It was cool—I loved it.”

To ensure as much safety as possible, there were veterinarians, ambulances, and gate crews present.

“We need to be shown speed, making sure that everything that we use [the horses for] is done in a safe manner,” Horrocks said. “So I engaged with [Senior Vice President and General Manager] Nate Newby at Santa Anita Park. And Nate was confident that we were able to get the right horses, horses that were going to have had experience on that racetrack. Especially down the 6 1/2-furlong start, which is down the hill, which I think is going to be really exciting.”

Equine Productions handicapped the race and worked alongside the horses’ trainers, who guided the production crew on who they thought was the best horse in the field. To avoid what Horrocks called a “disaster” scenario — one of the horses getting to the front and staying there — it was determined that the best experience for viewers would be if the winning horse came from behind or the middle of the pack.

The riders were asked to safely stay in a group coming down the hill until they cross the dirt course into the stretch. But that’s where the choreography ends.

“They were able to let the horses go and then whoever won from that point wins the race,” Horrocks explained. “It was acted out like a real race in the last two and a half furlongs, but we just wanted to make sure they stayed as a group coming down the hill to give the experience the best chance of succeeding and helping the audience feel what it’s like to ride in a real race.”

The relationship with the Breeders’ Cup goes back to 2017 when JockeyCam was first used in the United States during the event held at Del Mar.

“They’ve been pushing our sport forward for years. We have a great relationship with those guys. And every year, we check in to see what’s new,” said Breeders’ Cup Chief Marketing Officer Justin McDonald.

“Our goal down the road would be: can we get this VR camera on every jockey in a live race?”

Bringing that sort of access to an actual race — one not staged — would be an exciting prospect. However, doing so is currently fraught with pitfalls. Whereas the JockeyCam weighs 2.6 ounces, the 360-degree camera weighs more than a pound and has a more pronounced presence on the jockey. Horrocks said the technology “will have to move on again.”

The 360-degree camera, which sits atop the jockeys’ helmet, is not yet ready for races that count. Horrocks said that the size of the camera prompted a doctor with the British Horseracing Authority to label it a safety concern.

However, the riders BloodHorse spoke with don’t believe the equipment would be cumbersome or a risk.

“Sometimes right when you put it on you feel a little different, but once you are in a race, everything else kind of slips away. It’s just you and the horse and the adrenaline and you can’t feel it,” said Pyfer.

Using the technology regularly, though, may take some campaigning, especially considering how many rides a jockey may have on any given day and the process of preparing for each ride.

“It’s something that can be really special,” Rispoli said of the technology. “You don’t want it to become common for the people to see it.”

He noted that an additional element of the 360-degree cameras is they can provide jockeys and trainers another tool when analyzing races with different angles than they are accustomed to having.

For those not able to attend the Breeders’ Cup, there will be the ability to experience live 360-degree cameras at the paddock and front side of the track with a VR headset.

McDonald said in addition to cameras in the walking ring and winner’s circle, there will be 14 cameras placed on the roof of Keeneland and in 14 saddling stalls. Fans can follow the horse they want via the Breeders’ Cup website and mobile app.

“We are one of the oldest sports in the world. I think that’s to our benefit… but once you get people to the racetrack, once you get them to experience everything our sport has to offer they fall in love with it,” said McDonald. “So our goal at the Breeders’ Cup is to use the world championships to really provide people that experience and bring them into the sport and show them that this is a really unbelievable sport.”

Being at a track is such a sensory experience filled with distinctive sights, sounds, and smells. And while virtual reality does not deliver all of those, it does provide a different perspective. That perspective is one Horrocks hopes will cut through stereotypes of the sport.

“It enables us to get into the masses which we’re always trying to do. We’re always trying to engage a wider audience and particularly an audience that wouldn’t really look at us as entertainment or a sport,” he said. “I’m sure there’s still a younger generation that looks at us—that’s what posh, rich people do. You know, people with money, they’re all involved in horse racing. What this does, I think, is kind of gets through all that stuff, all the nonsense of what we perceive to be and it helps show you what it’s physically like.”

It’s not just about fun. The ultimate goal is to foster more fans for the sport and develop a greater appreciation for the participants.

In addition to the JockeyCam and The Breeders’ Cup JockeyCam VR Experience, Equine Productions also produces a show available on Amazon Prime in the United Kingdom and Ireland similar to the popular Netflix series “Formula 1: Drive to Survive.” In the same vein, “Horsepower” seeks to bring viewers closer to the people and personalities in the sport. Horrocks hopes that one day it will be imported to the United States.