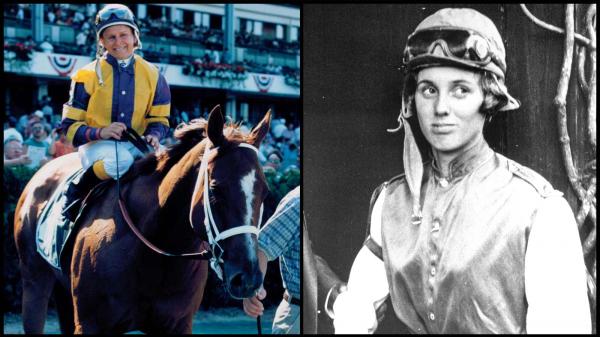 Throughout horse racing history, women have been instrumental in contributing to the progression and advancement of the sport. Although horse racing remains a largely male-dominated world, women continue to break down barriers as jockeys, trainers, owners, breeders, and farm managers.

This International Women’s Day, we want to celebrate a few of the women that have made a lasting impact and paved the way for women in the sport today.

Laska Durnell — In 1904, Durnell became the first woman to own a Kentucky Derby starter and winner with Elwood. Elwood was the first Derby runner owned by a woman and also the first bred by a woman, Mrs. J.B. Prather.

Kathy Kusner — In 1968, U.S. Olympic equestrian Kusner became the first licensed female jockey after she sued the Maryland Racing Commission for denying her application for a jockey’s license based on gender. She later rode on the east coast and in Canada and became the first licensed female jockey to ride races in Mexico, Germany, Colombia, Chile, Peru, Panama, and South Africa. Kusner earned a silver medal at the 1972 Olympic Games in Munich, Germany, to become the first woman to medal in an equestrian competition.

Barbara Jo Rubin — In 1969, 19-year-old Rubin became the first woman to win a pari-mutuel race held at a nationally recognized U.S. racetrack when she rode Cohesion to a half-length victory Feb. 22 at Charles Town. She subsequently became the first female rider to win a race in New York.

Cheryl White — On June 15, 1971, White became the first licensed African American woman jockey to ride in the U.S., and on Sept. 2 at Waterford Park she earned her first win aboard Jetolara. After an accomplished riding career competing in Thoroughbred, Quarter Horse, Arabian, Paint, and Appaloosa races, White passed the California Horse Racing Board’s steward examination in 1991 and subsequently served as a racing official at multiple racetracks in several different capacities.

Patricia “P.J.” Cooksey — This trailblazing jockey began a 26-year career in 1979, won her first race with Turf Advisor at old Waterford Park (now Mountaineer), and amassed 2,137 victories in her time as a jockey. In 1985, she became the second woman to ride in the Kentucky Derby and the first female jockey to compete in the Preakness, finishing sixth on Tajawa.

Rosemary Homeister Jr. — In 1992, Homeister became the first female rider to win an Eclipse Award, earning year-end champion honors as outstanding apprentice jockey. That breakthrough honor signaled the start of a highly successful riding career from 1992-2015 that saw her win 2,784 races. All the while she earned respect as a jockey who had the proper mix of skill, talent, and determination to be a top rider on the ultra-competitive Florida circuit.

Donna Barton Brothers — She is one of the most decorated female jockeys of her time, retiring in 1998 with 1,130 wins and more than $18.6 million in purse earnings after following in the footsteps of her mother, Patti. She was the second-leading money earner of all time among women at the time of her retirement. Barton Brothers used her talent on horseback to shift careers to on-track reporter in 2000, and she covers marquee events as an award-winning television journalist for NBC Sports.

Rosie Napravnik — In 2012, Napravik became the first woman to win the Kentucky Oaks when she guided Believe You Can to victory. She became in 2013 the first female rider to compete in all of the Triple Crown races in the same season, and became the highest-placing woman rider in the Kentucky Derby when she finished fifth aboard Mylute. Napravnik was the first woman to ride multiple Breeders’ Cup winners. She won the leading jockey title at Fair Grounds every year from 2011 to 2014 and topped the fall meet standings at Keeneland in 2013 and 2014.

Marylou Whitney — Known as “The Queen of Saratoga,” the philanthropist and socialite helped lift the iconic, upstate New York town back from the doldrums by bringing the biggest Hollywood stars to Saratoga and throwing grand parties. Whitney, who died July 19, 2019, at age 93, carried on the legacy of one of Thoroughbred racing’s great dynasties and did so much more than simply race in the famed Eton blue and brown silks of the Whitney family. She became the first woman in 80 years to breed and own a Kentucky Oaks winner (Bird Town, 2003). She won the Belmont Stakes and Travers the following year with homebred Birdstone. Whitney also was presented with the Eclipse Award of Merit in 2010 and was elected to The Jockey Club in 2011.

Penny Chenery — Best known as breeder and owner of 1973 Triple Crown winner Secretariat, “The First Lady of Racing” was so much more than that. In an age when there was little emphasis on providing women with an advanced education, Chenery attended Columbia Business School and used that business acumen to resuscitate faltering Meadow Stable, a racing and breeding operation founded by her father, Christopher. Chenery made sweeping changes and her wisdom and diligence paid off in a big way in 1972 when Riva Ridge won the Kentucky Derby and Belmont Stakes. The next year, Secretariat became the first Triple Crown winner since Citation in 1948. Chenery went on to join Martha Gerry and Allaire du Pont as the first women to be admitted as members of The Jockey Club and remained an inspiration and cultural icon until her death in September 2017.

Marje Everett — Racing was in Everett’s blood as the daughter of Benjamin Lindheimer, who owned Arlington Park and the now defunct Washington Park in Illinois, but she carved out her own place in Thoroughbred racing history. She took over as chairwoman at both Arlington and Washington Park following her father’s death in 1960. After selling her interest in both tracks, Everett acquired stock in Hollywood Park, relocated to California, and served on the racetrack’s board of directors from 1972 to 1991. Everett was chief executive officer and president of Hollywood Park from 1985 to 1991. She helped bring the Breeders’ Cup to the Inglewood, Calif., track twice during her tenure, including the inaugural event in 1984, and began what is now the Pick 6 in 1983.

Barbara Livingston — The chief photographer for the Daily Racing Form, Livingston has amassed six Eclipse Awards, four for photography and two for audio/multi-media, during a brilliant career. In 2018, she told Tom Pedulla that her life revolves around securing the next great image. “It’s not a passion for me. It’s actually an obsession, and I’m not sure it’s always helped me because it’s such a strong drive,” Livingston said. “But what are you going to do? When you are obsessed, you just are.” The results of Livingston’s lifelong obsession speak for themselves.

Charlsie Cantey — She never sought to break ground as the first female racing broadcaster … it just sort of happened. The former exercise rider for the great Ruffian, Cantey had an eye for talented racehorses and proved “a natural in terms of communication,” according to good friend and mentor Dave Johnson. Cantey spoke from the heart, capturing audiences with her knowledge, folksy style, and charm. That led to a 30-year broadcasting career that went on to include, at one time or another, ABC, CBS, ESPN, and NBC.