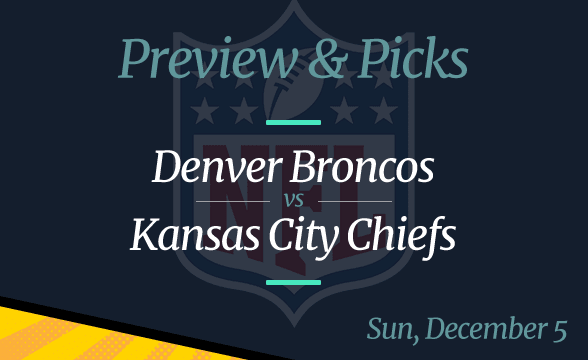 Patrick Mahomes is one of the very best quarterbacks in the NFL, but this Sunday, he and his teammates are facing a very tough challenge. The Kansas City Chiefs are locking horns with one of the league’s best defenses. The team in question is the Denver Broncos, their AFC West rival.

All odds are per FanDuel as of December 3.

The Broncos are in the NFL’s top 3 when defending is concerned, allowing just 17.8 points per game on average. Another impressive fact about Denver’s defense is that they conceded under 20 points in eight of the 11 games they’ve played thus far.

The best thing is that they’ve already faced a couple of offensive-minded teams, including the Cleveland Browns and Dallas Cowboys. Denver’s defense did great against both of them. Are we going to see them performing well against the Chiefs?

It’s highly unlikely, judging by their performances from the previous duels with Kansas. The Chiefs are 11-0 against them in the past six years, scoring 2+ touchdowns in 10 of those.

Kansas Wants to Keep on Winning

After going 3-4 in the first two months of the 2021 season, the Chiefs have returned to the winning track. They’re on a four-game win series, with a 100% record in November. As a result, they’re now at the top of the AFC West, with a 7-4 record.

The trouble is that each of their three divisional rivals has a 6-5 record, meaning that the #1 place is still up for grabs. The good news for the Chiefs is that they seem to have fixed their main issue from the start of the season – their defense.

In the first seven games of the season, their defensive average was 29.0 points per game. In the previous four, it’s just 11.75 points conceded per game. When it comes to their offense, it’s been good throughout the season. Their tally is 281 points scored over the course of 11 games, which makes them one of the NFL’s top 10 offenses.

Their quarterback, Patrick Mahomes has been solid this season. At the moment, his completion rate is 65.5%, with a total of 3,200 passing yards. So far, he’s thrown for 25 touchdowns, while 11 of his passes ended up intercepted. It’s not bad, but it’s fair to assume he’ll bump up his numbers before the end of the season.

Mahomes didn’t do well in Week 12, throwing for no touchdowns and one interception against the Cowboys. This Sunday, he’s likely to do better. After all, he likes playing against Denver – he is 7-0 against the Broncos, with a total of 10 TD passes and just three interceptions.

Picks: Kansas City Chiefs to win and cover the spread; over to hit