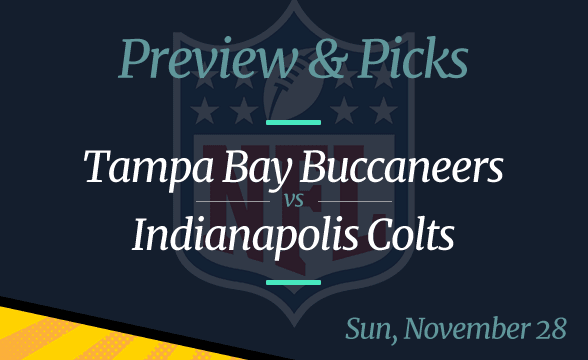 The Indianapolis Colts (6-5) are in a fantastic run at the moment, but bookmakers believe it may come to an end this Sunday. It’s because they’re playing against the Super Bowl LV champions, the Tampa Bay Buccaneers (7-3), in Week 12.

The Bucs are coming off a 30-10 MNF win over the New York Giants, which came after two straight defeats. Tom Brady had an okay game on Monday, with 30/46 for 307 yards, two touchdowns and one interception. He will have to do even better if his team is to win on Sunday, the reason being that the Colts have been pretty good defensively.

Still, history teaches us that Indianapolis just can’t handle Brady. His record against the Colts is 15-4, but all of those games happened when he was playing for the New England Patriots. The Buccaneers vs Colts game on Sunday is going to be his first as a Tampa player.

All odds are per FanDuel as of November 23.

Although they’re 6-5 on the season, the Colts have been superb in the past couple of weeks. In fact, after going 0-3 at the start of the season, they entered a series during which they didn’t lose a single game in regular time.

Both of their losses in the past two months happened in the overtime, but what’s even more important is that lost to real NFL heavyweights – the Baltimore Ravens and Tennessee Titans.

Speaking of footballing giants, the Colts have slain one on Sunday. In Week 11, they destroyed the Buffalo Bills on the road. The score was 41-15, which came as a surprise for a number of reasons.

First of all, before that game, the Bills had the best defense in the league. That didn’t frighten Colts’ running back Jonathan Taylor, though, as he scored four rushing touchdowns.

Secondly, Bills quarterback Josh Allen had a pretty disappointing outing, which saw him throw two interceptions – that was only the second time this season that two of his passes ended intercepted.

The Colts stopped Allen and Co., but can they do the same against Brady and his buddies?

Brady’s performances haven’t been that great since the Bucs returned from a bye. In the two games they played in November, Brady threw two touchdowns each time; in the two games before the bye week, he made four TD passes per game.

Brady also threw a total of three interceptions in the two November games, recording a passer rating of under 90 in each of those. Obviously, there’s room for improvement, but there’s one thing that’s giving the Bucs’ fans a lot of hope.

Brady has an amazing record against the Colts. Sure, he still hasn’t played against them in the Bucs’ jersey, but knowing how brilliant he was in the past, it’s very likely we’ll see him do well on Sunday.

Picks: Tampa Bay Buccaneers to win and cover the spread; under should win, as well.

2021-11-24
Previous Post: Abduction, Robbery and Murder Connected to Philadelphia Casino
Next Post: Shopping for Best Futures Odds is Definitely Worth Your Time