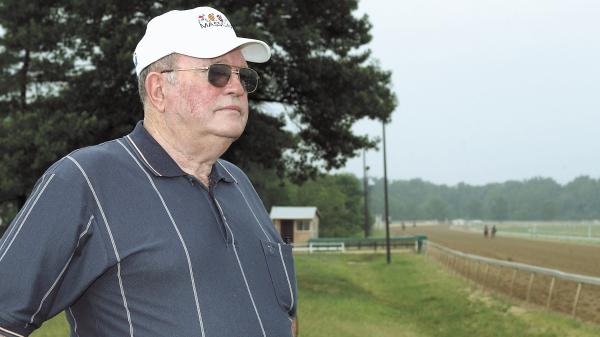 His best horse may have been gray, but for the most part there was no gray area when it came to people’s feelings about trainer Grover Greer “Bud” Delp.

The Maryland native was outspoken, irreverent, and controversial. He had a personality that divided people into two separate camps: those who loved him and those who had no use for him.

The common ground, though, was respect for his ability as a trainer.

Delp was one of the dominant figures in Maryland racing during the 1960s and 1970s, sharing that stature with his “Big Four” cohorts, King Leatherbury, Dick Dutrow Sr., and John Tammaro II.

He won 3,674 races and his horses earned more than $41 million in an illustrious career that started in 1962 and was rightfully recognized in 2002 when he joined the sport’s all-time greats in the Racing Hall of Fame.

“After a while, he wasn’t much of a rival. He was more of a friend,” Leatherbury said at the time of Delp’s death in 2006. “He actually was an idol of mine. I honestly thought he was a super horse trainer.”

As much as Delp’s wins rank him 18th among racing’s all-time leaders, there was one horse that will always be associated with him.

In 1978, Delp entered a horse in the third race at Pimlico on June 30 that had been purchased for $37,000 by the Hawksworth Farm of Harry, Teresa, and Thomas Meyerhoff.

The gray colt, named Spectacular Bid, was overlooked by many in the crowd as post time approached and he was dismissed at 6.30-1 odds.

Eyes popped open, though, when Spectacular Bid crossed the finish line a front-running, 3 ¼-length winner under apprentice jockey Ronnie Franklin in a time of 1:04 3/5 for 5 1/2 furlongs that missed the track record by two ticks.

Spectacular Bid then matched the track record in taking a July allowance race at Pimlico by eight lengths and then moved on to Monmouth for the Tyro Stakes where he turned in a dismal effort on a sloppy track, finishing fourth by nearly seven lengths.

That disappointing try was followed by a second-place finish in the Dover Stakes at Delaware, and then everything fell into place for Delp and Spectacular Bid.

The son of Bold Bidder romped by 15 lengths in the Grade 3 World’s Playground Stakes at Atlantic City and then turned in one dominant performance after another as he closed out his 2-year-old campaign by rolling to victory in the Champagne Stakes, Young America Stakes, Laurel Futurity, and Heritage Stakes by a combined 17 ½ lengths.

A no-brainer choice as 1978’s 2-year-old male champion, Spectacular Bid headed into 1979 as an overwhelming favorite to win the Kentucky Derby and sparked widespread conjecture that he could give the sport a third straight Triple Crown champion, joining Seattle Slew (1977) and Affirmed (1978).

Wins in the Hutcheson Stakes by 3 ¾ lengths and the Fountain of Youth by 8 ½ lengths to open his 3-year-old campaign did little to quell that notion.

Then, before the Florida Derby, Delp issued a comment that started a firestorm of controversy.

In the 1980 New York Racing Association media guide, Delp said the athlete he admired most outside of racing was Muhammad Ali.

“He knew he was the best at what he did,” Delp said about Ali, “and he let people know it. He had style and flamboyance.”

Speaking in a style on that 1979 day that would have flattered the boxer who called himself “The Greatest of All-Time,” Delp said of his horse, “Only an act of God can stop us from winning the Triple Crown. Spectacular Bid just might be the best horse to ever look through a bridle.”

The outcry among the loyal fans of Secretariat, Seattle Slew, and Affirmed was tremendous as they took umbrage with words that were perceived as arrogant and disrespectful of their heroes.

Yet, as it is often said, it’s not bragging if you can back it up, and Spectacular Bid surely did his best to live up to his trainer’s lofty praise.

He won the Florida Derby by 4 ½ lengths and the Flamingo Stakes by an astonishing 12 lengths.

After a seven-length score in the Blue Grass Stakes, Spectacular Bid was sent off as the 3-5 favorite in the Kentucky Derby. Though Franklin and “Bid” were sixth in the early stages, some 10 lengths off the pace, the Eclipse Award winner had no trouble powering past his rivals and winning by 2 ¾ lengths.

After a 5 ½-length score in the Preakness, a romp in the Belmont Stakes and a Triple Crown sweep seemed inevitable.

Then fate, or perhaps an act of God, intervened.

After Franklin unwisely chased an 85-1 shot in the early stages of the 1 ½-mile Belmont through quick fractions, Spectacular Bid nevertheless turned for home in the Belmont with a clear lead. Yet this time the unwavering speed that carried him to victory in the Derby and Preakness was not there. As Spectacular Bid shockingly shortened stride in the stretch, Coastal surged past to win by 3 ¼ lengths. Golden Act also caught the Triple Crown hopeful as Spectacular Bid faded to third.

In the aftermath of the defeat, Delp blamed the loss on a hoof injury that was caused when Spectacular Bid stepped on a safety pin.

Decades later, the “safety pin theory” remains as controversial as the trainer himself. Some believe it as gospel truth, others scoff at it. Some blame Franklin’s inexperience and believe his poor judgment might have been caused by a feud with Hall of Fame rider Angel Cordero that included a fist fight between the two in the jockeys’ room in the week leading up to the Belmont. Some blame Delp for pushing “Bid” too hard due to a desire to break Secretariat’s records in the Belmont.

“I still believe ‘Bid’ would have won [the Belmont] had Ronnie ridden a better race,” Delp told the Los Angeles Times after Spectacular Bid’s death in 2003.

Whatever the reason, though Spectacular Bid failed to become the 12th Triple Crown winner, that was the lone blemish on a legendary career.

He returned from the Belmont with a new jockey in Bill Shoemaker, and then won a Delaware allowance race by 17 lengths in track record time and the Grade 1 Marlboro Cup by five lengths as Coastal finished third.

In a showdown with Affirmed in the Jockey Club Gold Cup, Spectacular Bid could not catch his older rival and finished second by three-quarters of a length.

That would be Spectacular Bid’s last loss in a career that included 26 wins in 30 starts and Eclipse Awards as a champion at 2, 3 and 4 years old.

At 4, Spectacular Bid put together a season as good as any racehorse has ever registered. He was named Horse of the Year after a perfect 9-for-9 campaign with decisive wins in Grade 1 tests like the Strub, Santa Anita Handicap, Californian, and Amory L. Haskell.

In September of that year only three rivals dared to face him in the Woodward, and when the most formidable of them, Winter’s Tale, scratched due to injury, the other two also pulled out.

Spectacular Bid’s walkover in the 1980 Woodward was his final race in a Hall of Fame career, but Delp continued to win races in bunches.

He trained Dispersal, who won the 1990 Woodward and was third in the 1989 Breeders’ Cup Sprint, and in 2001 he had one of the top contenders for the Breeders’ Cup Classic in Include, who won the Pimlico Special, Massachusetts Handicap and New Orleans Handicap.

Yet in the end, it will always be Spectacular Bid who is mentioned in the same sentence with Delp.

There’s no gray area about that.

Note: This story was originally published in September 2015 and has been updated.