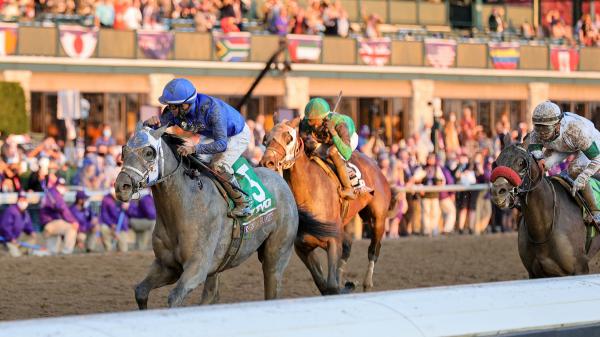 While the Longines Breeders’ Cup Classic is undoubtedly the anchor of Breeders’ Cup Saturday and the marquee race of the World Championships, none of the 14 races consistently impacts the next seven months of the sport as much as the FanDuel Juvenile Presented by Thoroughbred Aftercare Alliance.

From lifelong racing fans to the casual enthusiast, almost everyone who has even a passing interest in sports has heard of the Kentucky Derby Presented by Woodford Reserve. The Breeders’ Cup Juvenile is the first major platform for the following year’s Triple Crown hopefuls and also typically determines the Eclipse Award for champion 2-year-old male.

This yearly feature looks back at past editions of the race to see what the last 20 editions of the Juvenile tell us about the main attributes of a typical winner. We’ll then apply that knowledge to assess the 2022 FanDuel Juvenile Presented by TAA at Keeneland Race Course on Nov. 4.

California Dreamin’ – Nine of the 20 winners came out of a final prep race in California, including four of Hall of Fame trainer Bob Baffert’s five winners from 2002 through 2021, while four came out of the Champagne Stakes in New York.

No Parking for Clunkers – All 20 winners were third or better in their final prep race. Thirteen Juvenile winners entered off of a victory and 18 of the 20 were within three lengths of the winner in their final prep race. Only 2014 winner Texas Red (third by 4 ¾ lengths behind American Pharoah in the Grade 1 FrontRunner Stakes) and 2019 winner Storm the Court (third by 8 ¼ lengths in the Grade 1 American Pharoah Stakes) were exceptions.

A Classy Lot – Nine of the 20 winners had already won a Grade 1 race. Only two winners were not stakes winners or graded stakes-placed entering the race and they both entered off maiden special weight wins for Hall of Fame trainers: Action This Day (2003) for Richard Mandella and New Year’s Day (2013) for the aforementioned Baffert.

Any Kind – Running style is not especially important. Seven of the last 20 winners were either pacesetters or press the pace runners, while six others profiled as stalker/closers or closers.

A Bit of a Surprise – As it pertains to running style, the 1 1/16-mile races at Keeneland feature a short run into the first turn and a short stretch run that finishes a sixteenth of a mile before the standard finish line … at the sixteenth pole. These races typically favor speed horses, but in the two editions of the Juvenile held at Keeneland, winner Nyquist was eighth after a half-mile in 2015 and victor Essential Quality was ninth after a half-mile in 2020.

A Recent Trend – Nine of the last 11 winners and eight of the last nine had experience in a previous race going around two turns.

A Single or a Bomb

The last 20 editions of the Breeders’ Cup Juvenile have produced quite a few logical winners … and some stunning upsets.

On the other hand, eight of the last 20 winners started at double-digit odds and six times in the last 20 years, the winner has rewarded backers with a win payout of $29.80 or more for a $2 win bet. An upset like that can single-handedly give a bettor a profitable weekend.

Three Things to Look for Among the Favorites

Sometimes It’s Obvious – The five winning favorites mentioned above – War Pass (2007), Uncle Mo (2010), Shanghai Bobby (2012), Game Winner (2018), and Corniche (2021) – combined for 14 starts before the Breeders’ Cup Juvenile and won them all. All five capped unbeaten, Eclipse Award-winning campaigns in the Juvenile. All five winning favorites came out of Grade 1 wins: three came out of a victory in the Champagne Stakes at Belmont Park and two from the American Pharoah Stakes at Santa Anita Park.

Speed Paired With Class is Potent – The only one of the five favorites who did not lead from start to finish was Game Winner, who profiled as a stalker entering the 2018 Juvenile. He raced four lengths back in sixth after a half-mile and was within a head of the lead in early stretch.

Four of the five won by 1 ¾ lengths or more; only Shanghai Bobby, who won by a head in 2012, was seriously challenged in the stretch.

The Right Experience Counts – Of the six winners in the 7-2 to 5-1 range, only Stevie Wonderboy in 2005 did not have experience in a race around two turns and all six had a graded stakes win to his credit. Five of the six entered the Juvenile off a graded stakes win – Vindication (2002), Stevie Wonderboy (2005), Nyquist (2015), Classic Empire (2016), and Essential Quality (2020) – with the other, Midshipman in 2008, coming off a runner-up finish by less than a length in a Grade 1. Keep an eye out in that price range for graded stakes winners with route race experience.

What to Look for in a Longshot

If Flightline in the Longines Breeders’ Cup Classic is not the biggest favorite of World Championships weekend, there is a chance that distinction might fall to Cave Rock in the Juvenile. An unbeaten Arrogate colt, Cave Rock has all of the qualities you would look for in a favorite for this race. He is from the barn of Bob Baffert – who has won 25% of the last 20 editions of this race – he’s won all three starts by 5 ¼ lengths or more, he has a Grade 1 win around two turns in California in winning the American Pharoah Stakes, and like four of the five favored winners he has elite tactical speed. Cave Rock checks all of the boxes and figures to be tough to beat as by far the fastest horse in the race on paper.

If not Cave Rock, then who? The other logical contenders are Claiborne Breeders’ Futurity winner Forte, Champagne Stakes winner Blazing Sevens, and American Pharoah runner-up National Treasure. I’m a little suspect of Blazing Sevens’ win on a sloppy track in the Champagne, but I do think he is a quality 2-year-old. Forte has a win over the main track at Keeneland from off the pace while navigating two turns, so he fits the profile a little better than Blazing Sevens. Cave Rock’s stablemate National Treasure also offers plenty of appeal with two-turn experience and solid speed figures, but I would demand some value before climbing on board. If he is 10-1 or higher, the Quality Road colt offers significant upside.

Of the possible longshots, I am intrigued by Lost Ark coming out of a brutal trip in the Breeders’ Futurity. He’s a big-striding horse who was practically stopped twice but still finished willingly for seventh after winning the one-mile Sapling Stakes by 7 ½ lengths in his previous start for Hall of Fame trainer Todd Pletcher (who also trains Forte). This half-brother (same dam [mother], different sire [father]) to elite 3-year-old filly Nest – runner-up in the 2022 Belmont Stakes Presented by NYRA Bets – ran much better than it looks on paper. He’s an off-the-pace longshot who is a proven stakes horse and faster than several of the horses who probably will offer significantly less value. The hope is the Breeders’ Futurity was a learning experience for Lost Ark and a better trip leads to a breakout performance at a big price.

Another interesting value play is Curly Jack coming out of a 10.83-1 upset win in the Grade 3 Iroquois Stakes when navigating two turns for the first time. He ran fifth earlier in the year in the Grade 3 Sanford Stakes after setting the pace and then got outfinished when rallying from off the pace in the seven-furlong Runhappy Ellis Park Juvenile Stakes. But he showed some maturation for trainer Tom Amoss when stretching out in distance and rallying to prevail by a length in the Iroquois. He’s well-rested and has been working well, so if the price is right Curly Jack looks like a solid value pick as he’s a proven graded stakes performer who has shown the ability to rate and finish.