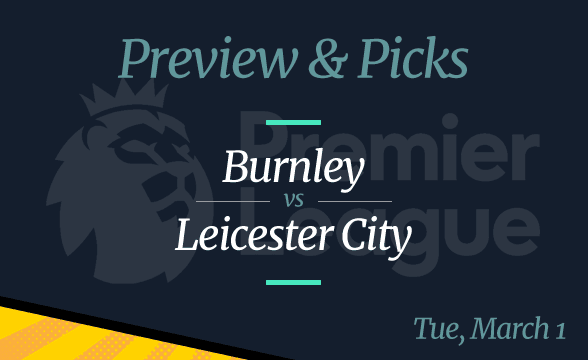 Burnley’s surge has officially started. The question is will it last long enough to take the Clarets away from the relegation zone? After winning seven points in three Premier League games, this team is taking on a former EPL champion, Leicester City.

Even though the Foxes are struggling, online sportsbooks do see them as the favorites to win on Tuesday. Do Burnley players have it in them to cause another surprise? Let’s see!

Burnley Wants Out of the Relegation Zone

Ahead of Tuesday’s clash with Leicester City, Burnley is sitting in the #18 position in the Premier League table. The Clarets currently have 21 points; however, they’ve also played several games fewer than a couple of teams above them.

For instance, Leeds has two points more but has also played two more games than Burnley. Then, there’s also Brentford, with three points and three games more. What all this means is that Burnley’s chances of getting away from the relegation zone don’t look too bad. This goes especially if the Clarets continue playing as they’ve been over the last couple of weeks.

This team lost only one of its previous seven Premier League games, winning two of the past three. Even in the game they lost, they showed they’re a force to be reckoned with – Liverpool beat them just 1-0.

The fact that the Reds failed to score more than once shows that Burnley’s strongest weapon is the defense. Another proof of this is that Burnley has conceded only 30 goals so far, which makes the Clarets a top 6 defense in the Prem.

Leicester City is without a Premier League win in 2022. So far this year, they’ve played five EPL games, three of which they lost, while the other two finished in a tie. They did, however, do well in the Europa Conference League, beating Randers in both games of their playoff doubleheader.

However, Randers isn’t as tough as Burnley, meaning that the Foxes are likely to struggle on Tuesday. Finding the net is going to be their main issue, considering that a number of their forwards are struggling with fitness. This includes their arguably best player, Jamie Vardy who’s out with a thigh injury.

On top of everything, Leicester City also has a relatively disappointing record against Burnley. The Foxes won only four of their previous ten meetings while losing three times. All of those defeats happened at Turf Moor, which is where Tuesday’s game is taking place.

This time, Leicester City might not lose, but getting a win also doesn’t seem very likely. That said, a tie seems like the most likely outcome.

Picks: Burnley and Leicester to Draw; Under 2.5 Goals