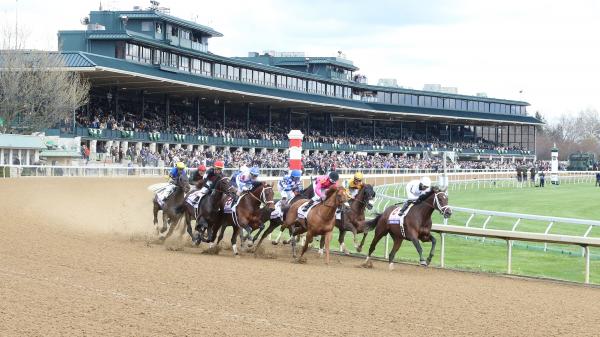 There were three qualifying points preps for the Kentucky Derby last weekend: the Wood Memorial Stakes Presented by Resorts World Casino, the Toyota Blue Grass Stakes, and the Runhappy Santa Anita Derby. The final race in the Road to the Kentucky Derby prep series – the Stonestreet Lexington Stakes – is set for Saturday, April 16.

One day after other 3-year-olds shined in racing action on the Road to the Kentucky Derby, he breezed five furlongs in 1:01 April 10 at Churchill Downs. His first work since winning the March 26 Twinspires.com Louisiana Derby was a maintenance tandem move against first-level allowance horse Guntown. Stiffer breezes are to come in the weeks ahead. Epicenter clings to the top spot in the Dozen rankings due to his professionalism, experience, and progression at age 3.

Off at 2.10-1 odds in the April 9 Toyota Blue Grass Stakes at Keeneland, he seemed to have more like a 20-1 chance midway on the second turn. Shuffled back in traffic to be last of 11, his chances of passing the entire field seemed bleak. But once he found daylight, he exploded under Flavien Prat, closing into second by midstretch and pulling clear of Smile Happy with a final furlong Trakus timed in :12.26. He remains second in the Dozen, not passing Epicenter, due to his tendency to break flat-footed, which, if repeated, could impact his early positioning in the Kentucky Derby Presented by Woodford Reserve.

For a horse making just his second start in the Runhappy Santa Anita Derby, and off merely a debut win at six furlongs, his inexperience never showed. This $1.7 million 2-year-old purchase broke smartly and relaxed in third, allowing Messier to do the dirty work of going after pacesetter Forbidden Kingdom, and then reeled in his stablemate down the stretch to complete 1 1/8 miles in 1:48.46. Only five horses have run in the Derby with one or two pre-Derby starts. None have hit the board. The last horse to run in the Derby with only two starts was China Visit, who finished sixth in 2000.

Though no match for Zandon’s stretch kick in the Blue Grass, he also turned in a performance that suggests he can threaten on the first Saturday in May. Hustled away from the gate, he sat closer to the pace than he had in his first three starts, sitting in third after a half-mile. He lost the most ground of the race’s top five finishers – running at least four paths off the inside into the first turn and three paths wide into the second. He has move-forward potential at Churchill Downs, where he won the Kentucky Jockey Club Stakes last fall.

His lone defeat in five starts came at Churchill when third in last fall’s Kentucky Jockey Club, but horseplayers shouldn’t harbor concerns about him not liking the surface. Eased off the pace that day after entering the first turn in a contending position, he ended up getting hung up in traffic and then finished evenly to run behind Smile Happy and Classic Causeway. He’s developed since, winning from pace-pressing positions or by stalking outside, as he did effectively in taking the April 2 Curlin Florida Derby Presented by Hill ‘n’ Dale Farms at Xalapa at Gulfstream Park.

Away somewhat awkwardly in the Santa After Derby, he was sent up by John Velazquez to chase pacesetting Forbidden Kingdom, logical tactics against the race favorite. When that one folded leaving the second turn, the 1 1/8-mile race seemed his for the taking. He kept Taiba at bay before yielding to him in the final furlong. It was the second time in three routes he has been outfinished. Derby longshot Slow Down Andy ran him down in the stretch of the Los Alamitos Futurity.

As well as he performed to take the April 9 Wood Memorial Presented by Resorts World Casino, he took advantage of a sweet, ground-saving trip. Despite rallying from last place, Trakus statistics noted he raced only four feet wider than Early Voting, who ran uncontested on the lead after favored Morello blew the break. Mo Donegal is a classy horse – he nipped Zandon by a nose in the Remsen Stakes after bumping him late, though stewards took no action to disqualify him.

Those looking for a live longshot to throw into their exotics in the Derby may want to consider this colt. He was dismissed at 32-1 odds in Churchill Downs’ final Kentucky Derby Future Wager pool, perhaps an indication he could similarly fall out of betting favor on Derby Day. His third in the Florida Derby is better than it appears – coming after he contested the pace between horses. That sapped the Fasig-Tipton Fountain of Youth Stakes victor of some of his late strength.

Though he is more experienced than Taiba, it is not by a whole lot. He has just three starts under his girth, two in maiden races and one in a stakes race. If he can turn in a more polished race in the Derby than he did when second in the Florida Derby, when he broke poorly and failed to keep a straight course in the lane, look out. Past winners of the Derby that had three starts going into the race include Justify (2018), Big Brown (2008), and Regret (1915).

He proved popular last week with future wager bettors – off at 17-1 – after his April 2 Arkansas Derby win. That came despite his time of 1:50.42, not particularly quick relative to the 1 1/16-mile Fantasy Stakes earlier that day at Oaklawn Park in 1:43.65. Time aside, he produced a sustained run to go after the leader down the backstretch, an early move that could have knocked out less talented runners. Looking past the Arkansas Derby, he ran quickly in a Feb. 19 allowance optional claiming win at Fair Grounds.

After traveling from Japan to Dubai and now to Kentucky in late March, having around five weeks to train over the Churchill surface should give him ample recovery time. Best not to discount the UAE Derby Sponsored By Mubadala victor given the dominance of Japanese horses in international racing. This colt’s only loss in four starts, a sixth in the Feb. 20 Hyacinth Stakes at Tokyo, came after he was impeded at the break and raced extremely wide.

Like Charge it, he falls in the three-start camp. He needs continued improvement to score a Derby upset, but he has developed with each start. Following a workmanlike maiden win at Fair Grounds, he took an allowance optional claiming race by 10 ¼ lengths at Oaklawn Park before his promising stakes debut in the Louisiana Derby. Nothing wrong with his second there to Epicenter, who ran a track-record 1:54.38 for 1 3/16 miles.

2022-04-14
Previous Post: Gamingtec: “Flexibility is something that sets us apart”
Next Post: Palace and Liverpool to reach the final