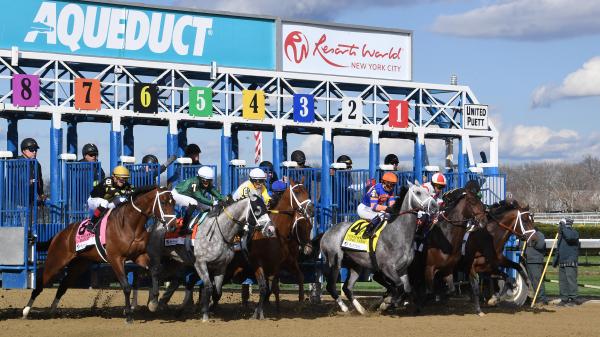 The Road to the Kentucky Derby qualifying points preps are complete, and now the focus shifts to Churchill Downs, where contenders are arriving and beginning to train over Churchill’s dirt track in preparation for the 148th run for the roses.

Hours after watching Jackie’s Warrior win the April 16 Count Fleet Sprint Handicap at Oaklawn Park, North America’s winningest trainer Steve Asmussen hopped in a car for an eight-hour ride from Arkansas to arrive at Churchill Downs to observe an April 17 morning workout from Epicenter (five furlongs in 1:00.80) and works from other horses. This colt has victories this year in the ultra-key Risen Star Stakes Presented by Lamarque Ford and the less-productive-to-date Twinspires.com Louisiana Derby. Louisiana Derby returnees Rattle N Roll and Call Me Midnight were well beaten in subsequent recent graded stakes at Keeneland.

Though he finished 3 ¼ lengths behind a confidently handled Epicenter when third in the Risen Star, he had little chance to beat him after missing the break. Zandon showed what he could do in the April 9 Toyota Blue Grass Stakes at Keeneland, this time overcoming a flat-footed start to rally from last after getting shuffled back in traffic. Trainer Chad Brown sees this colt as having more speed than what he has shown due to circumstances, pointing to the colt winning his debut last year in a sprint. “So he’s going to have to get a little better position in the Derby to give him his best chance,” he said.

As noted last week by Daily Racing Form’s Jay Privman following research by Keeneland library director Becky Ryder, one horse did previously win the run for the roses after just two prior starts: Leonatus in 1883. This colt will try to duplicate the accomplishment. He has the skill to win the Derby, having just won the Runhappy Santa Anita Derby, but rates behind the top two due to inexperience. Even putting aside his number of starts, he is disadvantaged by not having competed in a deep field or traveled away from his home track of Santa Anita Park.

Ground loss in the Blue Grass was essentially unavoidable when he drew post 10. He did well to finish second to Zandon when racing in the three or four path. If his trip allows, would not be surprised to see a change in tactics in the Kentucky Derby Presented by Woodford Reserve. Jockey Corey Lanerie is fond of saving ground with off-the-pace runners at Churchill Downs, riding the fence in Calvin Borel-like style when inside holes exist.

He didn’t run as quickly as other leading Derby prospects in winning the April 2 Curlin Florida Derby Presented by Hill ‘n’ Dale Farms at Xalapa at Gulfstream Park, trailing others on multiple speed-figure scales (Equibase, Beyer, BRIS, TimeformUS). Still, he is obviously in top form based on his recent races and an April 17 work at Gulfstream. Breezing by himself, he zipped three furlongs in :34.55 and galloped out with enthusiasm.

He was second-best to Taiba in the Runhappy Santa Anita Derby, but numerous horses have won the Derby after runner-up finishes there over the past 25 years. Silver Charm (1997) and Real Quiet (1998) did so, and Authentic followed suit in 2020, though the Santa Anita Derby didn’t immediately precede the September Derby of two years ago when the race was postponed by COVID-19. Medina Spirit also crossed the wire first in the Derby last year after placing in the Santa Anita Derby, though a medication violation ultimately resulted in his disqualification at Churchill Downs.

He should relish the 1 ¼ miles of the Derby and the long stretch at Churchill Downs. In closing to capture the Wood Memorial Presented by Resorts World Casino at Aqueduct with a highly favorable ground-saving trip, he sped his final three furlongs in :35.61, according to Trakus. In comparison to another powerful late-running 1 1/8-mile prep winner, Zandon finished in :37.08 in the Blue Grass over a slower surface at Keeneland, again per Trakus.

A lively pace in the Florida Derby – in which this horse was involved while racing between opponents – contributed to his fade to third. Upgrade that performance a bit, and this 3-year-old’s form suggests he can contend. He won the Mucho Macho Man Stakes and Fasig-Tipton Fountain of Youth Stakes this year at Gulfstream, and he also ran well when splitting victorious White Abarrio and third-place Mo Donegal when a slow-start second in the Holy Bull Stakes. Simplification breezed smartly with five furlongs in 1:01.83 at Gulfstream April 15.

Hall of Fame trainer Todd Pletcher consistently places him in company with older stakes horses for breezes, and often those older horses come under a drive to keep up. This colt drilled a half-mile at Palm Beach Downs in :47.77 April 15 before heading to Churchill, where Pletcher will put the finishing touches on a talented, lightly raced prospect. Charge It had every right to throw in the towel in the Florida Derby when taking dirt in his face for the first time, but he instead fought on to grab second to White Abarrio while racing greenly down the lane.

In discussing his trio of potential Derby starters (Cyberknife, Zozos, and Tawny Port), trainer Brad Cox said Cyberknife has moved forward and done “fantastic” since arriving at Churchill Downs after winning the April 2 Arkansas Derby at Oaklawn Park. He called a five-furlong breeze April 16 at Churchill Downs in 1:00 “off the charts” by his standards. Recall that Mandaloun also tipped his hand by how he had trained for Cox prior to the Derby last year. Mandaloun crossed the finish line second in the 2021 Derby to Medina Spirit before later being elevated to first when the Bob Baffert-trained Medina Spirit was disqualified for testing positive for betamethasone.

The best may still be to come from this Japanese 3-year-old, who is 3-for-4, with his most prestigious victory coming in the UAE Derby Sponsored by Mubadala in Dubai. A May 4 foal, he is on the young side, and perhaps with more upside to develop. His pre-Derby workout preparation contrasts with those of his American rivals who typically breeze on a weekly basis. Three days after a six-furlong work in 1:18.60 over a wet track at Churchill April 16, he returned to cover a half-mile in :49.80 on a fast surface April 19.

After winning his first two starts against lesser, he was runner-up in the Louisiana Derby behind Epicenter, who set a track record at Fair Grounds over the infrequently used 1 3/16-mile distance in 1:54.38. Zozos stayed steady in the stretch when passed by Epicenter to finish two lengths clear of show finisher Pioneer of Medina. “Obviously, Zozos lacks seasoning and experience, but he’s a good colt, a very good colt,” trainer Brad Cox said.