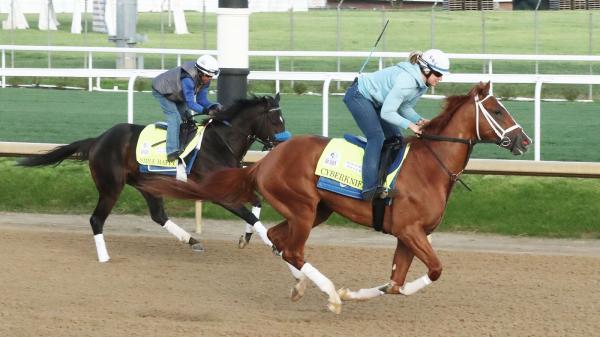 The Road to the Kentucky Derby qualifying points preps are complete, and now the focus shifts to Churchill Downs, where contenders are arriving and beginning to train over Churchill’s dirt track in preparation for the 148th run for the roses.

Working with graded stakes-placed and current allowance older horse Gun It April 24 at Churchill Downs, he always seemed to have that one at his mercy, hitting the finish about a neck in front with six furlongs in 1:12.20. His rider then shook the reins at him to test his response on the gallop out, and he opened up about a length before coasting. Speedy but rateable, this three-time stakes winner set a Fair Grounds track record in winning the Twinspires.com Louisiana Derby (1:54.38 for 1 3/16 miles), though two race returnees, Rattle N Roll and Call Me Midnight, were subsequently unplaced in stakes at Keeneland.

While many trainers put their charges through fast works two weeks before the May 7 Kentucky Derby Presented by Woodford Reserve, trainer Chad Brown opted for maintenance with Zandon, who went a half-mile in :48.60 April 23 at Keeneland. This colt seemed to be crying for his rider to cut him loose, tugging at the rider’s hold with controlled enthusiasm. The Toyota Blue Grass Stakes winner has moved on to Churchill, where he jogged April 25 before galloping April 26.

Cyberknife has turned the most heads of trainer Brad Cox’s Derby trio, which includes Zozos and Tawny Port. Cyberknife, the Arkansas Derby winner, followed an April 16 workout at Churchill that Cox called “off the charts” with a perhaps better six-furlong breeze in 1:12.20 Saturday in which he accelerated away from an outclassed workmate. The Arkansas Derby didn’t seem top-to-bottom to be as full of quality as other Grade 1s, but he did sustain an early backstretch advance that would have weakened a lesser horse. A colt on the rise.

Working with Derby prospect and stablemate Tiz the Bomb Saturday at Churchill, the pair finished on even terms. Smile Happy clocked five furlongs in 1:00.40, Tiz the Bomb in 1:00.20, owing to the latter starting about a length behind. They were head-and-head through the stretch, with perhaps Tiz the Bomb holding a slight edge before jockey Corey Lanerie gave Smile Happy a degree of encouragement in the final sixteenth. Smile Happy, winner of the Kentucky Jockey Club Stakes last fall at Churchill, showed some lather on his right shoulder.

Though he worked a furlong longer than Zandon, his Saturday workout at Santa Anita Park was similar to that one in that it was a solo drill, with jockey Drayden Van Dyke (subbing for regular rider John Velazquez) letting the colt breeze at a comfortable pace. This was a sharp move from a horse that travels efficiently. A 15-length victor in the Robert B. Lewis Stakes this winter, perhaps his fade to second last out in the Runhappy Santa Anita Derby can be attributed to a combination of factors including a short layoff, a somewhat awkward start, and chasing pacesetting favorite Forbidden Kingdom.

Breezing at Gulfstream Park with 2-for-5 sophomore stablemate Stormy Pattern, White Abarrio began about a length and a half behind that rival before finishing about two lengths ahead and pulling well in front when urged a furlong past the wire. Clockers credited the Curlin Florida Derby Presented by Hill ‘n’ Dale Farms at Xalapa winner with five furlongs in 1:00.04, coming under urging. His lone defeat in five starts came in the Kentucky Jockey Club last fall at Churchill when he was third with a challenging trip.

He pulled off a remarkable feat by winning the 1 1/8-mile Santa Anita Derby following just a six-furlong maiden win in fast time. The race took more out of him than it did his more seasoned stablemate Messier, leaving trainer Tim Yakteen to decide to work him just one time before the Derby, coming later this week. As brilliant and fast as this 3-year-old is, he needs to deliver a workout that doesn’t suggest he is still recovering from his brilliant win in the Santa Anita Derby.

Few horses have trained as well as he has toward the Kentucky Derby. Work after work at Gulfstream Park has left a positive impression, topped by a :59.42 five-furlong breeze there April 22. He has sustained an active racing schedule in Florida this winter and is showing no apparent signs of fatigue. The show finisher from the Florida Derby, he recorded his most significant win this year in the Fasig-Tipton Fountain of Youth Stakes, though most of those exiting that race have underwhelmed in follow-up starts.

He may be a lightly 3-year-old but already has plenty of experience looking older Todd Pletcher-trained horses in the eye in morning drills. He recently breezed with graded stakes winner and ex-Bob Baffert trainee Cezanne Friday at Churchill, covering five furlongs in 1:00.40. Charge It hit the wire about a neck in front under mild encouragement. He looks set to improve upon his Florida Derby placing, in which he broke slowly and raced greenly in the stretch.

Hall of Fame trainer Todd Pletcher gave him a relatively easy half-mile in :50.20 at Churchill Friday in the colt’s first move since taking the Wood Memorial Presented by Resorts World Casino at Aqueduct. Wood fifth-place Barese came back to finish third at 3-10 odds against New York-bred stakes rivals this past weekend, a disappointing result from those encouraged by the swift Wood time and its closing fractions. Strong-finishing Mo Donegal should relish the 1 ¼ miles of the Derby and the approximate quarter-mile stretch at Churchill.

The UAE Derby Sponsored By Mubadala didn’t seem a particularly accomplished Kentucky Derby prep, with Pinehurst favored and throwing in the towel to finish 16th. Crown Pride captured the 1 1 3/16-mile UAE Derby by running down a weakening Summer Is Tomorrow, who had been unraced beyond seven furlongs. But given what Japanese horses have accomplished over the past six months – two Breeders’ Cup wins in 2021 at Del Mar, and five wins on Dubai World Cup night at Meydan – it would seem folly to dismiss this 3-for-4 colt.

Cyberknife’s training has overshadowed that of barnmate Zozos this month, but Zozos has also been sharp in the mornings. He went six furlongs in 1:12.40 Friday at Churchill under a hold while just ahead of Fulsome, winner of the Oaklawn Mile Stakes in his last start. Though Florent Geroux was aboard for the workout, he is on Cyberknife in the Derby. Manny Franco has picked up the mount on the Louisiana Derby runner-up.

2022-04-28
Previous Post: Ferret to consolidate place at the top
Next Post: GambleAware Demands for Mandatory Levy on Gross Gambling Yield