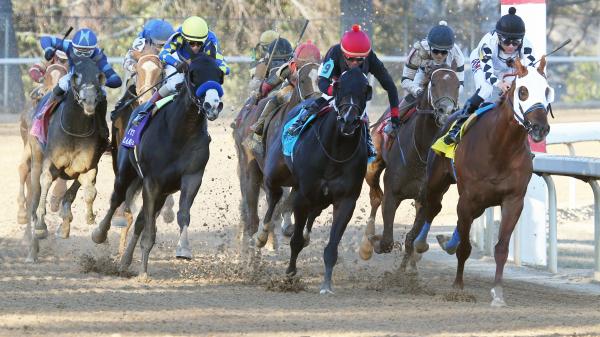 Last Saturday, Newgrange won the Southwest Stakes at Oaklawn Park but did not earn any Derby qualifying points due to Churchill Downs’ current ban on horses trained by Bob Baffert running in the 2022 Kentucky Derby. This upcoming weekend, three qualifying points preps are scheduled: the Holy Bull Stakes at Gulfstream Park; the Withers Stakes at Aqueduct; and the Robert B. Lewis Stakes at Santa Anita Park.

Last year’s Claiborne Breeders’ Futurity winner now has two three-furlong works under his belt at 3, the most recent being a :35.67 move Jan. 29 at Gulfstream Park. Trainer Kenny McPeek told Horse Racing Radio Network last week that this colt is likely to return in late February or early March, mentioning taking him to Tampa Bay Downs – which would mean the Lambholm South Tampa Bay Derby March 12.

Trainer Chad Brown told BloodHorse the colt is likely for a Feb. 19 start at Fair Grounds in the Risen Star Stakes Presented by Lamarque Ford. Returning there gives this colt a second race at 1 1/8 miles, also over a long stretch. In his first attempt at 1 1/8 miles, this horse gamely battled in the Remsen Stakes to fall a nose short of Mo Donegal  at the finish. To these eyes, he warranted being elevated to first due to a late bump – though the stewards saw it differently and made no change.

Speaking to HRRN, Kenny McPeek called him a “freaky talented horse,” an opinion shared by many who witnessed his two starts. He first opened eyes with a striking first-out maiden victory at Keeneland, which he followed with a romp in the Kentucky Jockey Club Stakes at Churchill Downs. Loaded with talented 3-year-olds and understandably not wishing to run them together, McPeek has this one pointed to the Risen Star, which is shaping up as a slugfest of 3-year-old talent.

Though he won the Remsen controversially – and likely should have been demoted to second for interference – his performance still received high marks. There was little pace in the race, and he showed a surprisingly quick burst leaving the second turn to dart from a stalking position and catch Zandon in early stretch. That followed a more workmanlike maiden win (albeit in a fast time) in which he needed to come under an early drive before finding his stride in the lane; probable for the Holy Bull Stakes Feb. 5 at Gulfstream.

The Holy Bull should be a barometer race, giving observers an indication of his class level on dirt. He obviously is a high-caliber colt on turf, as noted by two grass stakes wins and a runner-up finish in the Breeders’ Cup Juvenile Turf. He rolled on dirt last summer at Ellis Park, leading one to think he should be able to handle it without difficulty, but obviously doing so against maidens is far easier than against stakes foes; training promisingly on dirt.

This colt seemingly came out of his near-miss second in the Lecomte Stakes at Fair Grounds in good condition, breezing nine days later with an easy half-mile leg stretcher in :51. As noted in this space previously, he most caught the eye of those that ran in the Lecomte, showing determination after carving out fast fractions. Naturally speedy, he is not a need-the-lead type, however. He won pressing the pace when rolling in the Gun Runner Stakes this winter.

After a first-out score going a one-turn mile at Gulfstream, the Todd Pletcher trainee passed a two-turn test racing a mile and 40 yards against first-level allowance optional claiming company Jan. 30 at Tampa Bay Downs. Able to get away with setting comfortable splits :25.03 and :49.88, he had plenty left to turn back an early stretch challenge from Glider and pull away by 4 ½ lengths; elevated his Equibase Speed Rating from a debut 92 to a second-out 98.

This horse challenged with the best in the division when third in the TVG Breeders’ Cup Juvenile Presented by Thoroughbred Aftercare Alliance last fall at Del Mar, but that wasn’t his only top performance of 2021. He also defeated eventual Lecomte winner Call Me Midnight by three lengths in a maiden race at Keeneland; continues to post fast works at Gulfstream leading up to his 3-year-old unveiling, likely in the Holy Bull.

The Breeders’ Cup Juvenile runner-up currently tops the Road to the Kentucky Derby leaderboard, having 14 points along with Epicenter. Though yet to win going two turns, he has performed well to hit the board in all three routes, twice behind Corniche, the all-but-certain 2-year-old champion of 2021. He came up a little empty when returning in the Lecomte, perhaps in need of a race or a touch intimidated trying to rally up the fence.

Trainer Doug O’Neill initially had the Los Alamitos Futurity winner pointed toward the Jan. 29 Southwest Stakes before skipping it, with the trainer citing flight uncertainty from California. He told Daily Racing Form that the Risen Star is now on the colt’s agenda. The Risen Star is the first of the Kentucky Derby preps on an increased 50-20-10-5 scale; whoever wins is virtually guaranteed a Derby berth.

With Corniche and Jack Christopher still without published workouts as of Feb. 1 and considering Corniche is trained by Bob Baffert (suspended by Churchill Downs Inc.), that makes room for some new additions to the Dozen that are farther along in their training. Classic Causeway showed promise at 2 with a debut score and then with a pair of stakes placings in graded routes; likely to race next in South Florida after a six-furlong work in 1:12 2/5 at Palm Meadows Training Center Jan. 26.

Though runner-up to Newgrange in the Southwest Stakes, he lands in the Dozen while the Bob Baffert-trained Newgrange does not – owing to CDI’s suspension of Baffert. Barber Road was off a beat slowly and patiently handled early in the Southwest, resulting in him being much further off the pace than usual. Still, he came charging wide with a long, sustained rally; three times second in stakes.

2022-02-03
Previous Post: Men’s College Basketball Betting Predictions: Top 10 Teams That Could Get Into the AP 25
Next Post: True Geordie Is Back With The PokerStars Showdown Series