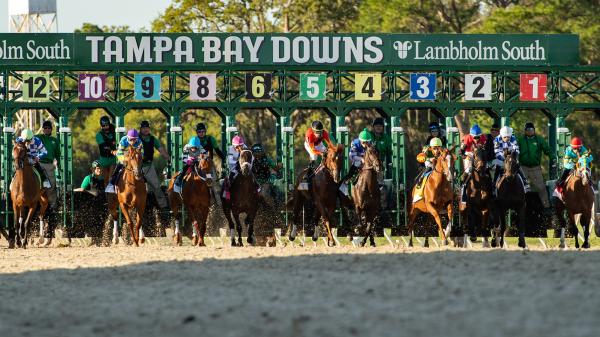 Last weekend, Classic Causeway solidified his position as a leading Derby prospect by winning the Lambholm South Tampa Bay Derby at Tampa Bay Downs. This weekend, there are no qualifying points preps scheduled. The activity picks up the following weekend as March wraps up and continues through mid-April with the most prestigious races on the Derby prep calendar set to run.

Unlucky to have not yet won a stakes race, having been second by a nose in a rough Remsen Stakes last fall and third after a slow start in the Risen Star Stakes Presented by Lamarque Ford, he runs next in the April 9 Toyota Blue Grass Stakes at Keeneland. Trainer Chad Brown told Daily Racing Form’s David Grening this past week that Flavien Prat will ride the colt there, while Jose Ortiz will pilot Early Voting that same day in the Wood Memorial Presented by Resorts World Casino at Aqueduct. Zandon worked a half-mile March 12 at Payson Park in :48 2/5.

The Kentucky Jockey Club Stakes winner and Risen Star runner-up closed as the slight 6.50-1 favorite among individual betting interests in Churchill Downs’ most recent Kentucky Derby Future Wager, just ahead of Forbidden Kingdom  at 7.30-1. One would expect him to be popular on Derby Day, too, with furniture mogul Jim “Mattress Mack” McIngvale also certain to wager a small fortune on the son of Runhappy. All three of his races have been excellent, and he’s a move-forward candidate in his second start of the year.

Five of the last six Kentucky Derby winners (on mutuel tickets) were either first or second after a race’s opening quarter. That bodes well for this speedster. After his front-running triumph in the San Felipe Stakes, a showdown with Messier looms in the April 9 Runhappy Santa Anita Derby. The latter will quickly join the Dozen if his Derby eligibility outlook changes.

Trainer Steve Asmussen will often give his horses a stiff breeze 12 days before a major stakes engagement, and that was the case for Epicenter March 14 at Fair Grounds, where he worked a bullet five furlongs in :59 3/5. That should set him up for the March 26 Twinspires.com Louisiana Derby, a race also expected to draw Rattle N Roll, Call Me Midnight, and Zozos.

Perhaps his clear-cut victory over slow-starting Simplification and late-rallying Mo Donegal in the Feb. 5 Holy Bull Stakes felt like too long ago to Kentucky Derby Future Wager bettors through Churchill Downs, who let him drift to 22.90-1 this past weekend. This colt shouldn’t be underestimated. His only defeat in four starts came with a head-scratching trip when third in the Kentucky Jockey Club last year.

As good as he looked in winning the March 5 Fasig-Tipton Fountain of Youth Stakes, he defeated some rivals that weren’t at their best. Second choice Emmanuel was off slowly and wide. Rattle N Roll returned from a five-month layoff and ran like a horse in need of a race. And High Oak and Galt both fell (without injury) in a race with a spill. Still, Simplification won despite traffic early down the backstretch when sandwiched between horses and after losing ground with a wide second-turn rally.

His gate quickness served him well at Tampa Bay Downs this winter and should benefit him in the annual 20-horse scrum that is the Kentucky Derby. As comfortably as he won the March 12 Lambholm South Tampa Bay Derby, let’s not forget that race has produced merely two Derby winners and the modest accomplishments of those 3-year-olds that chased him there. Classic Causeway’s next start in the Blue Grass should prove telling.

The Wood is next on his itinerary after trainer Todd Pletcher said this colt developed a low-grade fever in the days before the Fountain of Youth, leading to his scratch from that race, where he had drawn post 12. As of March 14, he had yet to return to the work tab – hopeful to see him back breezing soon. A start in the Wood will put him back racing at the track and distance over which he captured the Remsen back in December.

Fourth with a troubled trip in the Fountain of Youth in his first stakes engagement, he has just five qualifying points toward the Derby. He likely needs a top-two finish to safely qualify, though he could perhaps make the run for the roses with a third (worth 20 more to his tally). Perhaps because of his limited Derby points, he drifted to 33.80-1 odds in the latest Kentucky Derby Future Wager. The opinion of him in this corner remains high.

After winning the March 5 Gotham Stakes, he resumed breezing March 14 with a leg-stretching half-mile in :52 1/5 at Belmont Park. Slow time aside, to see him back working so soon after the Gotham suggests he came out of the race in good condition. Perfect in three starts, though none beyond a mile, he faces his first two-turn test in the Wood. His dam scored her lone win at seven furlongs on dirt but placed in multiple routes.

Trainer Kenny McPeek likes the 1 3/16 miles of the Louisiana Derby and plans to return the Claiborne Breeders’ Futurity winner there, three weeks after his sixth in the Fountain of Youth when he ran like a short horse off the bench. That race didn’t appear to knock him out. A tweet from owner Lucky Seven Stable showed video of the colt with an energetic gallop Saturday at Gulfstream Park.

The Fountain of Youth runner-up clings to the final spot in the Derby Dozen, just beating out graded winners Early Voting and Un Ojo, and well-bred fast maiden winner Charge It. In Due Time is likely to meet the latter, White Abarrio, and Simplification in the Curlin Florida Derby April 2 at Gulfstream, a race that should give insight regarding the pecking order in South Florida.