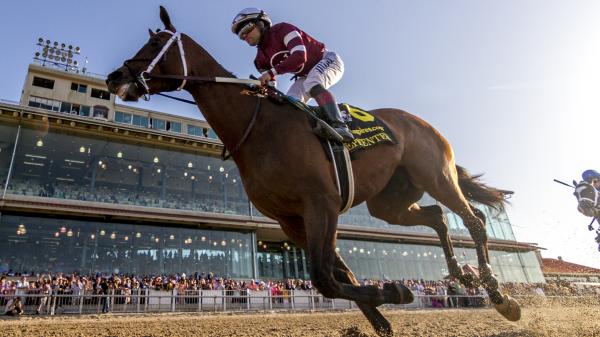 There were three qualifying points preps for the Kentucky Derby last weekend: the Twinspires.com Louisiana Derby, the UAE Derby Sponsored by Mubadala, and the Sunland Park Derby. Three more are scheduled for Saturday, April 2: the Curlin Florida Derby, the Arkansas Derby, and the Jeff Ruby Steaks.

The leading points earner on the Road to the Kentucky Derby arrived March 29 at Churchill Downs, leaving him with nearly six weeks of on-track preparation for the May 7 run for the roses. He already is proven over the track, having won a maiden race there last fall. He climbs to the top of the Derby Dozen rankings on the heels of his track record-setting Twinspires.com Louisiana Derby score, in which he rated in third early and kicked away, the only horse to do much passing down the lane.

Though outrun by a confidently handled Epicenter in the Risen Star Stakes Presented by Lamarque Ford at Fair Grounds Feb. 19, he delivered a solid performance to finish third, beaten 3 ¼ lengths, after blowing the break in his first start at 3. Awaiting the April 9 Toyota Blue Grass Stakes at Keeneland, he has been training swiftly over the deep Payson Park strip. His last three half-miles have been timed in :48 and change for trainer Chad Brown.

Transferred last week from trainer Bob Baffert to Tim Yakteen, Messier is now eligible for qualifying points toward the Kentucky Derby. Run first or second in the April 9 Runhappy Santa Anita Derby, and he should have enough points to gain entrance. In his first breeze for Yakteen, who assisted Baffert before beginning his training career in 2004, Messier worked behind several horses March 27 and the colt responded with a bullet six furlongs in 1:11 2/5.

Last fall at Churchill Downs, he decisively won the Kentucky Jockey Club Stakes – a race that has proven to be the most productive of 2-year-old stakes from 2021. The Risen Star runner-up between Epicenter and Zandon in his season debut, he remains trainer Kenny McPeek’s top Derby hope after a few of McPeek’s other prospects were off the board in dirt stakes over the past couple of months. Blue Grass bound.

A speedster, he was keen when rated behind a workmate in a March 24 drill at Santa Anita Park. After tugging at his rider for the opening quarter, he settled a bit on the turn and slipped inside barnmate Charlito to finish about two lengths in front without being asked. He did not appear to grow fatigued, a good sign since he had missed a breeze the previous week due to running a fever. The San Felipe Stakes winner runs next in the 1 1/8-mile Runhappy Santa Anita Derby against Messier and likely a short cast of other 3-year-olds.

The Holy Bull Stakes winner blew out March 29 for the April 2 Curlin Florida Derby, a :34 4/5 three-furlong move, which followed a 1:00 2/5 breeze over five furlongs at Gulfstream Park March 20. Proven fresh, he will need his best to defeat a high-class field likely to include Simplification, Classic Causeway, Charge It, Pappacap, and Shipsational.

While some trainers have opted for spacing with Derby prospects this spring, trainer Antonio Sano has stayed old school, giving this colt three starts this year and a fourth is soon to come in the Florida Derby. The colt is blessed with natural speed, but as he showed in winning the Fasig-Tipton Fountain of Youth Stakes, he can skillfully come from off the pace, too. Prone to not switch leads in his races, though he regularly does so in his workouts. Regardless, he’s fast.

Originally slotted for the Blue Grass, he moved into the Florida Derby lineup, with his connections preferring elements of prepping him there. He makes a quick three-week turnaround after winning the Lambholm South Tampa Bay Derby, but it also leaves him with five weeks of recovery time into the Kentucky Derby. After beating lesser at Tampa Bay Downs, the Florida Derby should prove a barometer for where this quick-starting colt stands against some of the best around.

Gearing up for the April 9 Wood Memorial Stakes Presented by Resorts World Casino at Aqueduct, he breezed March 26 at Palm Meadows Training Center with the graded-placed 3-year-old filly Classy Edition. Breezing past the wire and through the turn, he gradually inched away while feeling his rider’s crop. He was timed in 1:00 4/5 for five furlongs. The Remsen Stakes winner should appreciate the 1 1/8 miles of the Wood.

This is not your average maiden winner. Coming off a fast second-out victory at Gulfstream Feb. 12, he goes next in the Florida Derby, giving him one shot to qualify for the Kentucky Derby. Besides two promising races – he was a close second in his debut – Charge It is impeccably bred, and he recently outworked graded stakes-winning older horses Promise Keeper and Fearless in separate joint breezes. Those flashy drills propelled him into the Dozen, replacing stablemate Emmanuel, who just missed the cut.

Though prior winners of the UAE Derby Sponsored By Mubadala have disappointed in the Derby, this one has Japanese racing momentum on his side. Japanese horses won five races on Dubai World Cup Day March 26, and they took two Breeders’ Cup races this past fall at Del Mar. This colt’s time for 1,900 meters in the UAE Derby was slow but over a laboring track surface. Crown Pride also had the third widest trip of the 16 starters, according to Trakus statistics.

This progressive colt has run faster with each start, with Equibase Speed Ratings of 82, 90, and 94. He held second in the Louisiana Derby, 2 ½ lengths behind victorious Epicenter after setting a lively tempo under mild pressure. Short on experience but not on talent, Zozos is one of two late-blooming 3-year-olds (along with the Arkansas Derby-entered Cyberknife ) for dual Eclipse Award-winning trainer Brad Cox.

2022-03-31
Previous Post: 3 Unconventional Plays that Made Us Think Differently About Women in Poker
Next Post: Brazilian & Argentinian clubs to dominate again