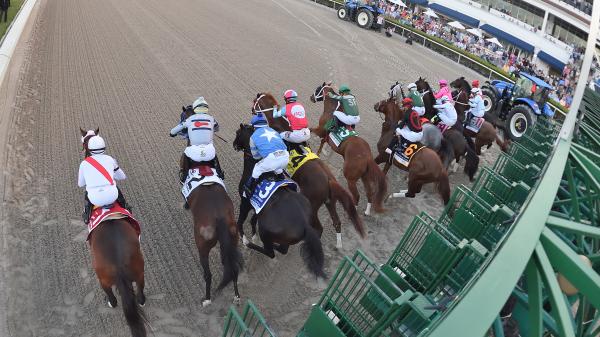 After a third in the Feb. 19 Risen Star Stakes presented by Lamarque Ford at Fair Grounds, he resumed breezing March 5, covering a half-mile in :49.60 at Payson Park in South Florida. Likely up next is the $1 million Toyota Blue Grass Stakes at Keeneland on April 9, which regained Grade 1 status this year after it was run as a Grade 2 from 2017-21. Anticipating development after an encouraging comeback race in which he played catchup after a sluggish start.

He also seems likely to benefit from his first start at 3 when second in the Risen Star. He was one of last fall’s top 2-year-olds, winning first out in a route at Keeneland and following that race up with a graded stakes victory in the Kentucky Jockey Club at Churchill Downs. He breezed a half-mile in a maintenance :49.03 at Gulfstream Park over the weekend.

Being a frontrunning sprinter out of a graded stakes-winning dam who never won beyond six furlongs, Forbidden Kingdom had been a route question mark prior to Saturday’s San Felipe Stakes, but not any longer. He romped in the 1 1/16-mile race at Santa Anita Park, making fractions of :22.66, :45.90, and 1:10.46 look relatively easy to set. His pace slowed late but he won with his ears pricked, clocked in a fast 1:43.98 for a 102 Equibase Speed Rating.

The Risen Star winner was sharp in an in-company drill in a bullet :59.60 at Fair Grounds March 7, and looks to be headed into the $1 million Twinspires.com Louisiana Derby March 26 as the probable favorite. There a rematch is in order with Call Me Midnight, who ran him down in a fast-paced Lecomte Stakes earlier in the Fair Grounds meet. Some leading contenders that chased this speedy colt in the Risen Star, however, are likely to skip the Louisiana Derby.

The Holy Bull Stakes winner had his form flattered by runner-up Simplification returning to take the Fasig-Tipton Fountain of Youth Stakes this past Saturday. Simplification was compromised by a poor start in the Holy Bull and elevated his game with a better trip in the Fountain of Youth. White Abarrio missed training and overcame it to win the Holy Bull, and he is training swiftly leading up to an intended fresh start in the Curlin Florida Derby at Gulfstream April 2.

After being compromised by a tardy beginning in the Holy Bull, his Fountain of Youth was eagerly anticipated and he still managed to exceed expectations. Patiently handled into the first turn, he tugged at Jose Ortiz down the backstretch behind a wall of horses before traffic cleared in front of him and he circled widest with a successful rally. As in the Fountain of Youth, he didn’t switch leads but it didn’t stop him from running up a 3 ½-length margin of victory in a race tarnished by a two-horse spill.

After scratching from the Fountain of Youth after drawing post 12 and developing what trainer Todd Pletcher said was a low-grade fever, his next start is to come in the Wood Memorial Presented by Resorts World Casino at Aqueduct April 9. That race makes sense for this late-running colt, who nipped Zandon by a nose in Remsen Stakes there last fall over the same 1 1/8-mile trip.

After rolling in the Feb. 12 Sam F. Davis Stakes to kick off his 3-year-old season, he returns to Tampa Bay Downs for the March 12 Lambholm South Tampa Bay Derby, where he is likely to go favored against a field that should also the comebacking Major General, who won a maiden race and the Iroquois Stakes last year. Classic Causeway seemingly holds the edge with a start over the track and being battle-tested against some of the best of the division.

His first stakes attempt in the Fountain of Youth was deceptively good. Off poorly, he was shuttled back entering the first turn and sat eighth after a quarter mile. Hung wide, he fought his way back into contention down the backstretch and on the second turn, sitting in third with an eighth remaining before finishing fourth. His race was somewhat reminiscent of the trip Simplification experienced in the Holy Bull – and we know how that one performed with a better journey in the Fountain of Youth.

Facing a field that included several out-of-state invaders, this colt passed his first graded stakes test in winning the one-mile Gotham Stakes at Aqueduct by 4 ½ lengths to improve to 3-for-3. After chasing pacesetting Florida invader Dean’s List, he reeled that one in and pulled away in the one-turn test. Trainer Steve Asmussen has gradually stretched him out, and now a key two-turn try awaits in the 1/8-mile Wood.

Running in the Fountain of Youth with a limited worktab, the race seemed a means to an end to get him ready for the Kentucky Derby in a couple of months. He ran as if he were short on fitness, advancing up the rail down the backstretch before weakening to sixth. Look for him to improve in his second prep of the year – he will have to move forward to earn Derby qualifying points. He has shown he is a high-class, two-turn horse, taking the Claiborne Breeders’ Futurity last fall at Keeneland.

He crossed the wire second in the Fountain of Youth, his first-two turn race, and stayed up following an inquiry after stewards made no change to the order of finish after two horses went down in the race (thankfully without injury). In search of room under Paco Lopez, this colt bumped a foe, who in turn appeared to bump High Oak, one of the two horses that fell as a tight pack jostled leaving the second turn. In Due Time had mostly a ground-saving trip, covering 23 fewer feet than the winner and 61 feet less than Emmanuel, per Trakus data.