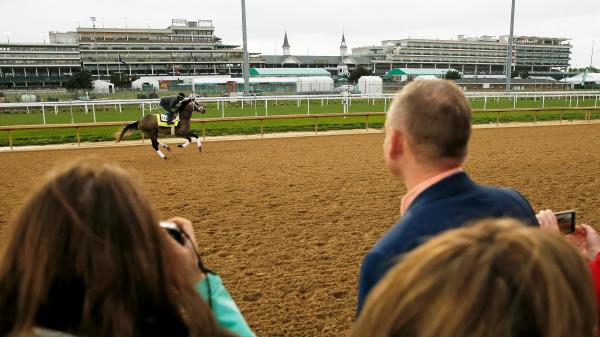 Byron King’s Derby Dozen for May 4

BloodHorse news editor Byron King presents his final Derby Dozen for 2022, with a look at his leading contenders for the Kentucky Derby Presented by Woodford Reserve on May 7.

The draw for Derby 148 was held on May 2, and the contenders are at Churchill Downs and taking their final training turns in preparation for the mile-and-a-quarter classic, scheduled to go off at 6:57 p.m. ET in front of 150,000-plus fans and millions more watching on NBC.

His draw toward the inside in post 3 in the May 7 Kentucky Derby Presented by Woodford Reserve seems a non-issue. Neither of the two horses inside him have speed, and if he breaks alertly – as Steve Asmussen’s frequently-schooled horses typically do – he should be able to secure a forward position under Joel Rosario. Rosario can then assess the pressure on his outside, perhaps from horses such as Summer Is Tomorrow and Messier, and determine whether to dictate terms or ease back and track the pace with the Twinspires.com Louisiana Derby winner.

Though he has not worked as quickly as many of his counterparts leading up to the run for the roses, he has turned heads with his morning drills. He has looked set to explode, tugging at his exercise rider without being overeager. Combine that with the way he won the Toyota Blue Grass Stakes, and he has considerable appeal. His placement behind Epicenter comes down to him leaving the starting gate in less than optimal fashion this year. A tardy break usually leads to getting shuffled back in the Derby.

Mandaloun trained the best of trainer Brad Cox’s horses before last year’s Derby – even better than Essential Quality – and he crossed the wire second, only to eventually move up to first on the positive drug test from Medina Spirit. Similarly, Cyberknife has appeared the strongest of Cox’s trio of Zozos and Tawny Port this year in his preparation. He looks ready to run as well, if not improve upon, his effort in capturing the Arkansas Derby, though that field seemed light by Grade 1 standards.

He was the swifter of the two Tim Yakteen trainees in his final Derby drill, sizzling six furlongs in 1:11.60 at Santa Anita Park April 29, compared to a 1:12.80 three-quarters move the preceding day from Taiba. His speed figures and performance figures compare favorably with other leading contenders, though he falls behind the top three due to not yet having won a dogfight. He is 1-for-3 in routes, winning the Robert B. Lewis Stakes for fun, but yielding to settle for second in each of his two other races around two turns.

Though the Curlin Florida Derby Presented by Hill ‘n’ Dale Farms at Xalapa has produced more Kentucky Derby winners (24) than any other prep, many are discounting White Abarrio, this year’s victor. A common theme uttered by handicappers this week has been that this year’s 3-year-old group in Florida was an average lot, not quite as fast as horses from other regions. This gray is honest and has a versatile running style that often leaves him well-positioned, plus he deserves credit for winning both the Florida Derby and Holy Bull Stakes despite interrupted training.

The race flow of the Florida Derby favored closers when this colt, Classic Causeway, and Pappacap had a three-horse early tussle, and he was in a challenging spot between his rivals. Simplification did well to hold third after growing aggressive. Drawn in post 13, suspect we’ll see an off-the-pace trip in the Derby, as his connections try to replicate the success he had when rallying to victory in the Fasig-Tipton Fountain of Youth Stakes.

His final Derby breeze didn’t go as scripted, with him breaking off several lengths behind Tiz the Bomb and staying there, though the goal of half-mile in about :48 was achieved. Trainer Kenny McPeek had wanted his pair breezing together. Compared to sparkling drills from other runners, this workout left a little something to be desired. No critique of his race record with two wins and runner-up finishes behind Epicenter and Zandon this year.

Hall of Fame trainer Todd Pletcher said earlier this week that he feels the success of lightly-raced horses in the Derby is “dependent on the trip that you get,” pointing out that Triple Crown winner Justify won the 2018 Derby on the lead. Charge It, like Justify, has made just three starts and possesses the speed to be close – provided he doesn’t break poorly, as he did when second in the Florida Derby. Flashy works from this colt, first exhibited in Florida, have continued in Kentucky.

Though he defeated stablemate Messier in the Runhappy Santa Anita Derby in an awesome display from a horse coming off just a debut maiden score, his barnmate has more pre-Derby buzz. Taiba seems a possibility for regression. He only worked one time following the Santa Anita Derby, as the race took more out of him than Messier, who has breezed twice. In addition, Taiba’s two races have come in seven- and six-horse fields. He could react negatively in a 20-horse Kentucky Derby without a smooth trip.

Supporters of the “Final Fractions Theory” are fond of this colt, who ran down loose-on-the-lead Early Voting in the Wood Memorial Presented by Resorts World Casino at Aqueduct with a final three-eighths that Trakus timed in :35.61. Less enthusiastically, he drew the rail in the Derby. No horse since Ferdinand in 1986 has won from there, though the continuous 20-horse starting gate first utilized in 2020 is now positioned to leave more room for inside-drawn horses.

Though many question the strength of the race he used to qualify for the Derby – the UAE Derby Sponsored By Mubadala at Meydan – what shouldn’t be questioned is how effective Japanese horsemen have been on the world stage over the past year. Among their achievements are two Breeders’ Cup wins at Del Mar and five wins on Dubai World Cup night. Doubt this year’s Derby will be added to that list, but a respectable effort from this colt is likely. Like Zandon, he places himself at a disadvantage at times by leaving the gate awkwardly.

Working with Cyberknife at Churchill Downs April 30, he was a smidge second best, still finishing six furlongs in a swift 1:11.40. Second in the Louisiana Derby, he withstood pace pressure from Pioneer of Medina and never folded when Epicenter went by him in the early stretch. Drawn in post 19, with all the speed inside him, he seems likely to play a tracking/stalking role in the Derby. Such a trip for the versatile colt is unlikely to take him out of his comfort zone.