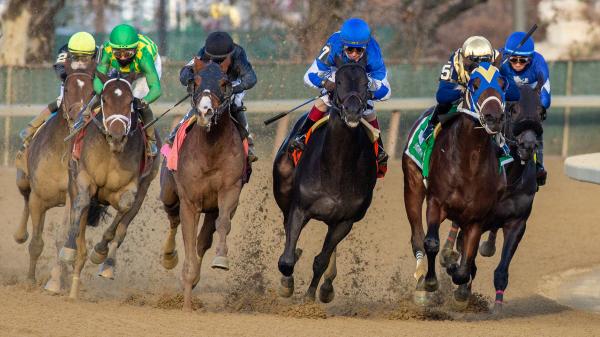 BloodHorse news editor Byron King presents his inaugural Derby Dozen for 2022, with a look at his leading contenders for the Kentucky Derby Presented by Woodford Reserve on May 7.

Last Saturday, Call Me Midnight upset Epicenter in the Lecomte Stakes at Fair Grounds to earn 10 qualifying points for the 148th Derby. This Saturday, Jan. 29, is highlighted by the Southwest Stakes at Oaklawn Park, another qualifying points race that drew a 12-horse field including Smarty Jones Stakes winner Dash Attack.

A hind foot injury forced him to miss the Breeders’ Cup. A few weeks behind fellow Kenny McPeek trainees Smile Happy and Tiz the Bomb on the workout schedule, he resumed breezing Jan. 22 with a three-furlong move at Gulfstream Park in :36.13. In taking the Claiborne Breeders’ Futurity at Keeneland in October, he turned heads by passing six horses on the second turn with a wide rally, turning the race into a rout before early stretch.

Though he fell short by a nose in the Remsen Stakes to Mo Donegal at the end of last season, he ran the better race of the two. After breaking a half-length slow, he lost ground with a three-wide trip around both turns and appeared impeded by Mo Donegal in the lane. Still, he was coming back on that rival late under John Velazquez. Though stretching out from just a six-furlong debut win, he galloped out in front.

McPeek immediately debuted him around two turns at Keeneland last fall in a 1 1/16-mile race and then tried the Kentucky Jockey Club Stakes at Churchill Downs, both resulting in clear victories. Note that seventh-place finisher Call Me Midnight returned to win the Lecomte Stakes. This colt is pointed to the Feb. 19 Risen Star Stakes Presented by Lamarque Ford at Fair Grounds, per McPeek.

He improved with distance late last year, winning a 1 1/16-mile maiden race at Belmont Park and the 1 1/8-mile Remsen, controversially taking the latter. Saving ground around much of two turns, he angled out approaching the lane, and his rally looked like it would propel him to a clear-cut win in midstretch. Mo Donegal may be the type only to do what is required; should relish 1 ¼ miles.

His turf class is apparent with two rich stakes wins and a runner-up finish in the Breeders’ Cup Juvenile Turf. But he also impressed on dirt last year, winning a maiden race by 14 ¼ lengths on the Ellis Park main track. He easily outbreezed his workmate Jan. 23 in a dirt workout at Gulfstream Park and is a leading player for the Holy Bull Stakes there Feb. 5.

He arrived Jan. 9 at trainer Chad Brown’s south Florida stable after having a screw inserted in his left shin in a procedure in November. Winner of his first two starts, including the Champagne Stakes, he is uber-talented but yet to race two turns. He has some short or middle-distance elements in his pedigree, being by Munnings out of the Half Ours mare Rushin No Blushin, a half-sister to Grade 1-winning sprinter Street Boss.

He set quick fractions in the Jan. 22 Lecomte – :23.40, :47.01, and 1:12.16 – though he was largely clear of the field in doing so. He proved tough to pass, first turning Pappacap aside and nearly holding off longshot winner Call Me Midnight. That fine second-place finish, coupled with good-looking wins in a maiden race and the Gun Runner Stakes, leaves him as the top-rated hopeful in Louisiana.

After a three-length maiden win at Keeneland over eventual Lecomte winner Call Me Midnight, he showed he belonged in the TVG Breeders’ Cup Juvenile Presented by Thoroughbred Aftercare Alliance. After a four-wide rally on the second turn, he settled for third behind Corniche and Pappacap; working bullets in Florida.

After runner-up finishes to Corniche in the American Pharoah Stakes and Breeders’ Cup, he kicked off his season with a close third in the Lecomte at Fair Grounds. After stalking the pace, he attempted to slip up the rail but grew a smidge tired and settled for third. Precocious enough to debut in May, he may not have the development upside of counterparts.

Whether the probable 2-year-old champion of 2021 makes the Derby is in question, owing to trainer Bob Baffert’s suspension issued by Churchill Downs and his horses not earning points on the Road to the Kentucky Derby. Without court action overturning those moves, this colt would need to start for another trainer and pick up the necessary qualifying points to gain entry. Yet to breeze in 2022 after a winter freshening at WinStar Farm. Those factors combine for his placement toward the bottom of the Dozen.

As well as this Doug O’Neill trainee performed in winning the Los Alamitos Futurity in his third start by a length over Messier, he would seem to have more room for development if he can maintain focus through the lane. He waited and leaned on his rival in midstretch, only to regain his momentum late and pull away. Recent workouts have come with blinkers, suggesting we could see those added for his next start.

As with Smile Happy, this McPeek trainee is perfect in two routes. He won a Dec. 5 maiden race at Oaklawn Park and the Smarty Jones Stakes there Jan. 1, both at a mile. Though the latter race was ungraded and without established stars, it did lure a field of 13, and after breaking a couple of lengths behind the field, he rallied to win going away with his ears pricked; goes next in the Jan. 29 Southwest Stakes.