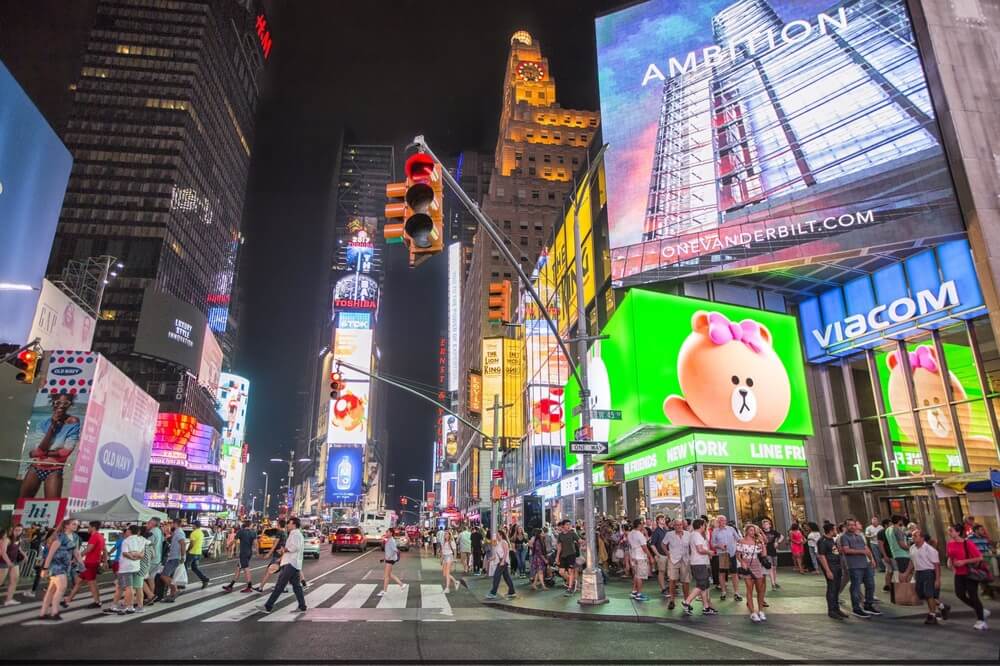 Caesars Entertainment is dreaming of a Broadway debut.

This may be the location for Caesars Time Square. (Image: SL Green Realty Group)

The owner of the World Series of Poker is partnering with New York City real estate developer SL Green Realty Group in an attempt to secure one of the three casino licenses that will be awarded to the metro area sometime next year.

Caesars Palace Times Square would be built at 1515 Broadway, a skyscraper right in the heart of Times Square, which is the current home to the Disney musical “The Lion King.” The developers will keep the theater and the show if they get a license.

That’s a big if, since New York’s casino market has attracted some of the biggest players in the industry who all want to get a foothold in the world’s largest untapped source of gambling revenue.

Details, such as the cost or the square footage, weren’t revealed in the announcement.

Full casinos have existed in New York State since 2013, but lawmakers kept them out of the five boroughs so that the industry could establish a foothold in places like Bridgeport, Akwesasne, and Schenectady.

Besides having buildings that already house digital table games and slots, the owners of those properties — Malaysia’s Genting and MGM Resorts International — have spent millions in the past two years on lobbying, according to a recent report from the Gothamist.

Barring a surprise, the smart money is on each of them to secure full casino licenses, leaving just one very lucrative permission slip up for grabs.

“It’s really the one license, the other two are spoken for,” Alan Woinski, CEO of Gaming USA Corporation, a gambling consulting firm, told the Observer. “It’s going to be a bloody battle.”

Who will get the final golden ticket?

Caesars International isn’t the only company that wants to open a casino in Manhattan, let alone the city of New York.

In January, developer Jason Adler proposed a $3 billion project that included an Asian-themed casino called Mirai that would have an eSports arena and a port for flying cars. He’s partnering with Japanese casino firm Universal Entertainment Corp.

Last month, Wynn and NY real estate and developer Related Companies announced a partnership that will pursue the license to build a resort and casino in the West Side Yard near the recently opened Hudson Yards residential and shopping complex near midtown on Manhattan’s west side.

It would be located next to the Javits Center, a large convention space that recently completed a $1.5 billion expansion. Related Companies is the driving force behind the proposed project.

Hard Rock, meanwhile, is in talks with Steven Cohen, a hedge fund manager who also owns the New York Mets. Cohen wants to put a casino next to Citi Field in Willets Point. Hard Rock was previously attached to the development of 1515 Broadway with SL Green Realty Group.

The Observer also reported that Bally’s is interested in the market, as are two billionaires who want to build a casino on Coney Island. None of those entities have submitted plans in connection with their proposals, and have until Jan. 3, to apply.

On Oct. 3, a three-member panel was formed to decide who will receive the licenses. Ninety days after the January deadline, the panel will send its recommendations to the state’s gaming control board, which has the final say.