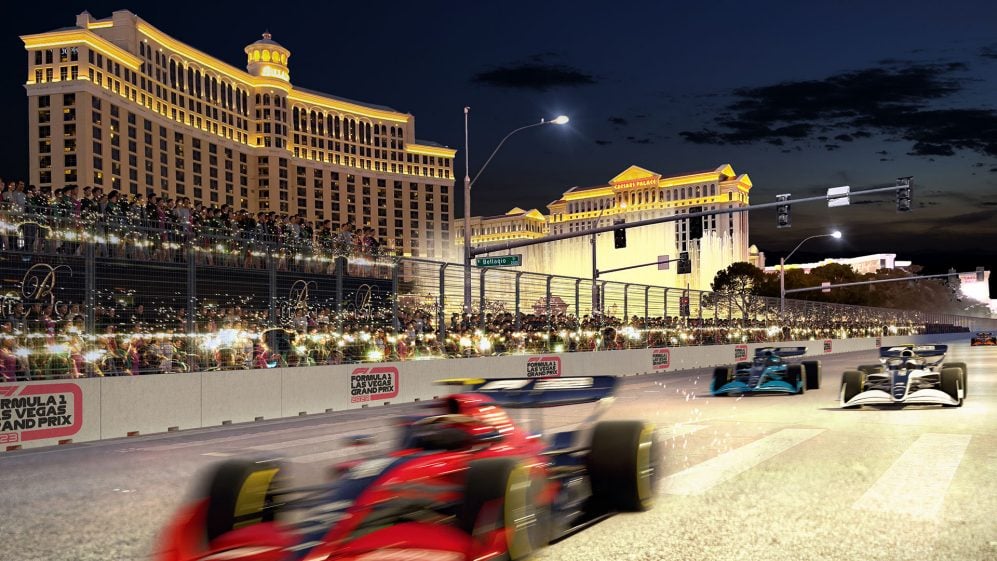 Jumping the Formula 1 starting lights by a whole year, Caesars Palace announced today an all-day launch party for the Las Vegas Grand Prix on Friday, Nov. 5, 2022. The big race doesn’t take place until Nov. 18, 2023, but construction on the track is already underway.

An artist’s rendering of the Formula 1 Las Vegas Grand Prix, which will wind through the Las Vegas Strip on Nov. 18, 2023. Caesars Palace will hold a launch party for the race on Nov. 5, 2022. (Image: formula1.com)

The launch party, free to the public, will be held 11 a.m.-11 p.m. throughout Caesars Palace. It will include race-themed events with multiple F1 race teams and drivers represented. A live car run, with drivers from Oracle Red Bull Racing and Mercedes-AMG Petronas, will run on the Strip. An esports simulator will allow fans to race head-to-head on the official F1 game. And a Formula 1 Pit Stop challenge will allow attendees to try their hands at changing a Formula One car’s wheels in under three seconds.

“We are thrilled to welcome our fans to the launch of the 2023 Las Vegas Grand Prix,” Stefano Domenicali, president and CEO of Formula 1, said in a statement. “The Las Vegas Grand Prix is going to become a regular fixture in the city and on the global sporting calendar, so it is important to have local fans both celebrated and celebrating with us from the very start. This launch is a small but exciting taste of things to come over the next year when all the Formula 1 teams hit the Strip.”

The Las Vegas Grand Prix is the first Formula 1 Grand Prix Race in Las Vegas since the Caesars Palace Grand Prix in 1982. But while that race was limited to the Caesars Palace parking lot, this one will cover most of the Strip Nov. 16-18, 2023 with a 3.8-mile long track that weaves around Las Vegas Boulevard. Drivers will hit top speeds of over 212 mph during the 50-lap race, scheduled for 10 p.m. Sat., Nov. 18.

Construction has already begun on the 39 acres Formula One purchased for $240 million earlier this year. The plot, previously home to the Ice nightclub at Koval Lane and Harmon Avenue, will include the pit and starting line for the race.

“This November, we’re thrilled to have the opportunity to give Formula 1 fans a taste of what’s to come with a launch party at Caesars Palace that combines the heart-pounding excitement of F1 with the excitement and spectacle that can only be found in Las Vegas,” said Sean McBurney, regional president of Caesars Entertainment.

According to Caesars Palace, the first 500 fans (age 21 or older) attending the launch party will have a chance to win a ticket for a VIP celebration that night featuring a performance by the Killers.