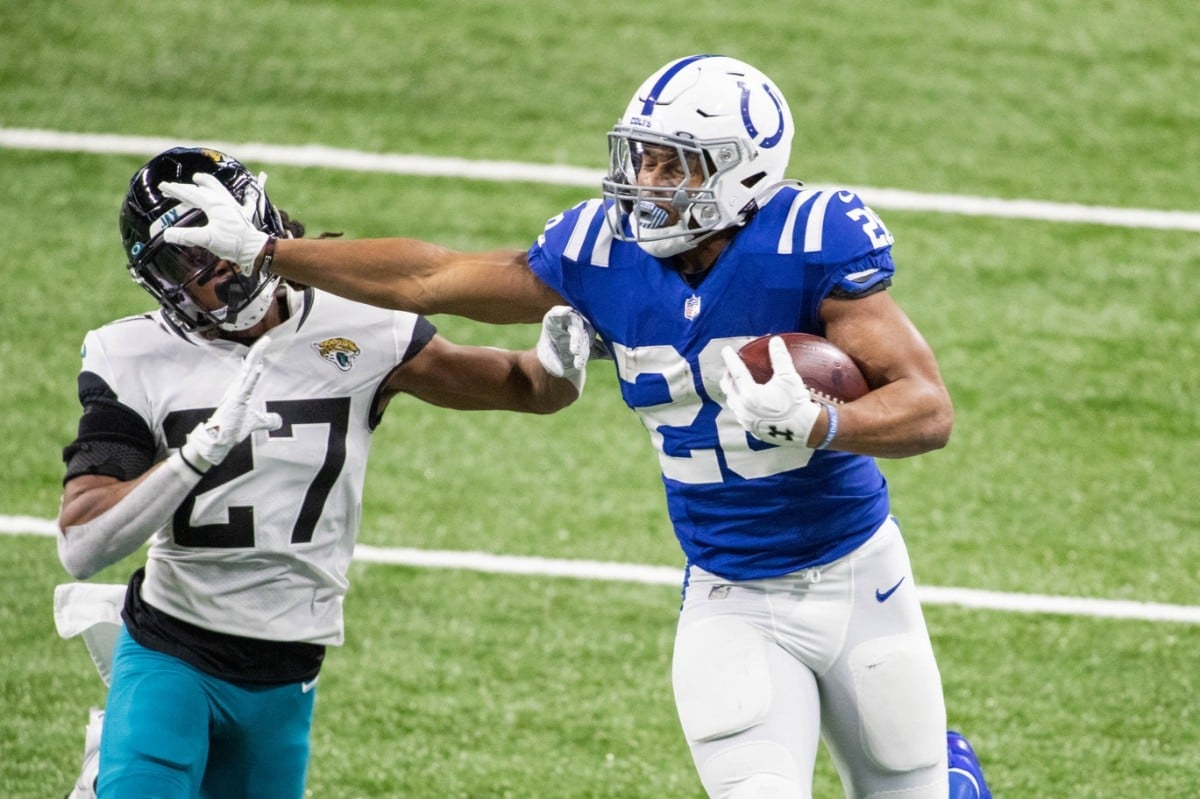 A first-of-its-kind partnership was unveiled earlier this week when Caesars Sportsbook and the Indianapolis Colts announced a deal giving fans a $500 discount for season tickets to next year’s Colts games in exchange for opening an account with the sports betting operator.

Indianapolis Colts running back Jonathan Taylor applies a stiff arm to Chris Claybrooks of the Jacksonville Jaguars in a January 2021 game. The Colts have announced a partnership with Caesars Sportsbook that will allow new Caesars users to get a $500 rebate on their season ticket purchase or renewal for the 2022-23 season. (Image: Trevor Ruszkowski/USA TODAY Sports)

To qualify, Colts fans must first renew or buy season tickets for the 2022 season, with new season ticket holders agreeing to buy at least two tickets per game. From there, they would need to download the Caesars Sportsbook app on their phones, establish an account, make a deposit, place a $50 wager.

In return, those new Caesars users would receive the $500 as a rebate. Certain terms and exclusions do apply. More information is available at the Colts website.

A check of the Colts tickets page on the team’s website Thursday night showed one season ticket available for $470. Many more are available starting at $530 per ticket. There is also a $10 service charge for the purchase.

Sports bettors deserve promos and offers that treat them like royalty,” said Chris Holdren, co-president of Caesars Digital in a statement. “Our partnership with the Colts enables us to deliver on that promise and continue to reward loyal Colts fans.”

While existing Caesars Sportsbook customers cannot qualify for the rebate, the Colts and Caesars are offering a $100 free bet on the Jan. 2 Colts game against the Las Vegas Raiders for any current Caesars customer who buys or renews their season ticket package.

The season ticket offer comes as sportsbooks look to expand their reach into current legal markets and grow their customer base. This is especially true in Indiana, which legalized sports betting in 2019 and has emerged as one of the top markets in the country.

In October, the state’s licensed sportsbooks reported a handle of $461.1 million, the highest ever amount.

By offering a rebate on season tickets to new users, the deal is designed to attract Colts fans who may not already be into sports betting or have a relationship with Caesars Entertainment, which is the biggest casino operator in the state of Indiana.

Since rebranding the William Hill Sportsbook app under the company’s flagship brand in August, Caesars has seen significant growth in traffic from Indiana online bettors. In July, the William Hill app reported a handle of $7.9 million, according to figures from the Indiana Gaming Commission. From August through October, Caesars has reported monthly handles $16.9 million, $30.7 million, and $40.2 million, respectively.

However, while the handle – or amount bet – has risen exponentially in just three months, adjusted gross receipts (AGR) have not initially kept pace. Aside from a $3 million month in June, no other month has exceeded $1 million in revenue this year. In October, online revenues were just $435,658.

For perspective, Caesars’ brick-and-mortar sportsbooks are more profitable. With three casinos, three off-track betting parlors, and retail sportsbooks still in operation at two former Caesars properties in the state, Caesars has the largest brick-and-mortar network in Indiana. Combined with its online book, the company reported a handle of $63.8 million in October and AGR of nearly $2.3 million.

Indiana defines AGR as the total of handle minus all winnings paid out, including “the cash equivalent of any merchandise of thing of value awarded as a prize,” and uncollectable receivables. The IGC also includes futures wagers in the month the bet was placed for handle but revenues from futures bets are not reported until the month they were cashed.

Caesars isn’t just focusing on Indiana for its sportsbook growth. Since the rebranding campaign began just before football season, the Las Vegas-based company has embarked on an ambitious marketing campaign nationally. In July, the company secured naming rights to the Superdome, which will host the Final Four next April and the Super Bowl in 2024.

The campaign also includes television commercials that have been panned by some. However, Caesars has also looked to partner with sports teams as well as famous athletes and others connected to the sporting world – like former ESPN anchor Kenny Mayne – to promote the sports betting app.

Earlier this month, Caesars announced an ambassador deal with the Manning family that will include Archie Manning and his sons Peyton, Eli, and Cooper in commercials and live events. Peyton is a legendary NFL quarterback who spent most of his career with the Colts and led them to a Super Bowl victory in the 2006 season.

The season ticket deal with the Colts is the latest venture between the two companies. Earlier this year, the Colts announced Caesars would be the team’s official casino partner. Caesars operates the two closest casinos to Indiana’s largest city.

2021-11-26
Previous Post: Oryx Realizes Jack’s Casino Alliance in Netherlands with Successful Launch
Next Post: What Determines the Parameters for Wagering?