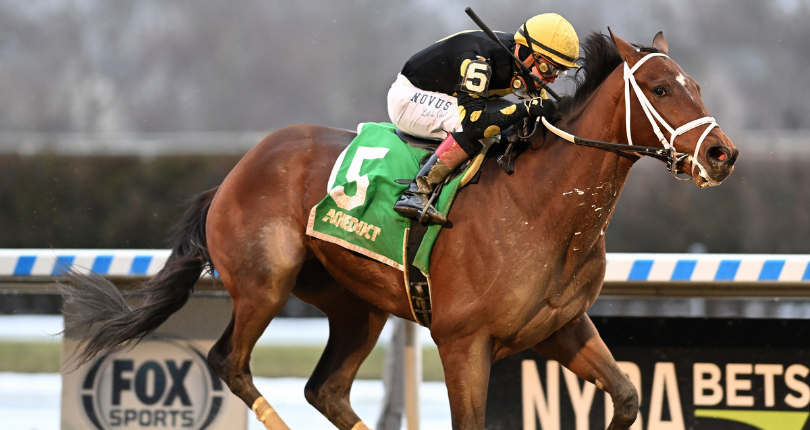 Barese races to victory in a stakes race last month at Aqueduct in Queens. This past week, Caesars Sportsbook announced it would partner with Aqueduct operator NYRA to offer an online racebook. That wagering app would be powered using the NYRABets platform. (Image: CD Photo/NYRA)

On Thursday, the mobile sports betting and iGaming operator said its racebook would be available for download this spring. Caesars will use NYRABets, the advance-deposit wagering application for the New York Racing Association, for its platform.

By partnering with NYRABets, Caesars Racebook will have access to more than 250 tracks from across the globe. NYRA also operates the three thoroughbred tracks in New York. They are Aqueduct Racetrack in New York City, Belmont Park on Long Island, and upstate at Saratoga Race Course.

NYRA conducts world-class horse racing and NYRA Bets has access to the best horse racing content from around the world, including from Caesars-operated racetracks,” Caesars Digital Senior Vice President and Chief Development Officer Dan Shapiro said in a statement.

That agreement came as Caesars was one of the first operators to launch a mobile sports betting app in New York.

NYRA President and CEO Dave O’Rourke said in a statement that the organization believes it has “a core responsibility” to horse racing and expanding access to top races and tracks will only help attract more fans.

“Pairing the world-renowned Caesars brand with the rapidly growing NYRA Bets wagering platform is an ideal way to launch Caesars Racebook, which will soon deliver all the NYRA Bets tools and advantages to the Caesars customer base,” O’Rourke said.

Caesars, however, isn’t the only sports betting partner NYRA has. Last May, NYRA and BetMGM announced a similar partnership, with that sportsbook also establishing a racebook ADW powered by the NYRA platform.

A spokesperson for NYRA told Casino.org that nothing regarding the Caesars announcement changes anything about its relationship with BetMGM.

Caesars move to offer a racebook comes as New York leaders want to see more integration between the Sport of Kings and all other sports, at least when it comes to betting.

State Sen. Joseph Addabbo, D-Queens, has called for that, saying he wants individuals to be able to bet on both. The Senate Racing, Gaming, and Wagering Committee chairman has filed a bill to allow racetracks and off-track betting parlors to offer sports betting kiosks.

“It would be just a natural marriage,” the senator told Casino.org back in November. “It would just be a rational thought, once again, to combine those two.”

2022-03-13
Previous Post: 888 Introduces Made to Play Master Brand Campaign in the UK
Next Post: March of the Rings at WSOP Online in America