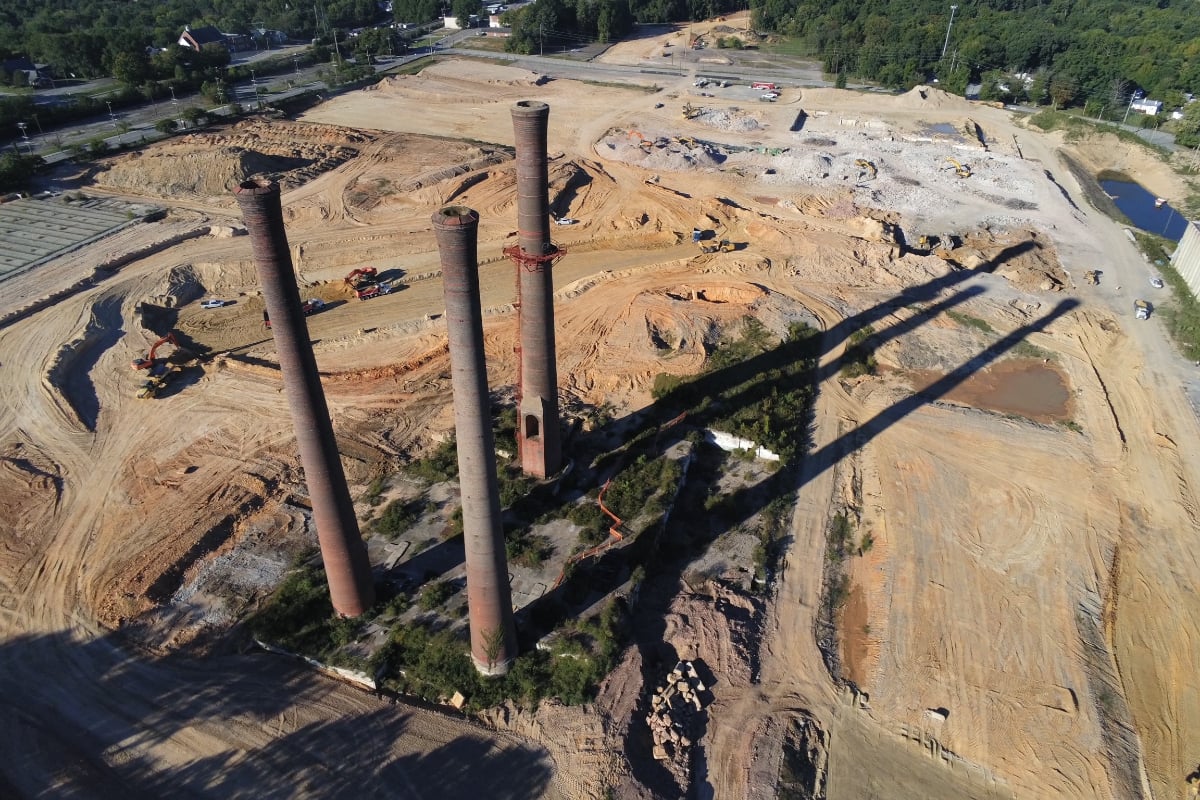 Caesars Virginia in Danville is one of four commercial casinos under construction in the state. Caesars Entertainment, which is leading the development of the regional casino in Virginia’s Southside, announced this week that it plans to open a temporary gaming space next July on the Schoolfield site.

Site work continues at the future home of Caesars Virginia in Danville. The “Three Sisters” smokestacks that have towered over the former textile mill complex for decades will be incorporated into the casino’s final design. (Image: Caesars Virginia)

Danville was one of five cities that qualified to consider a casino undertaking through the state’s 2020 gaming bill. Local voters approved of Caesars’ casino resort submission during the November election that year.

In a nod to the site’s storied past, which served as the economic heartbeat of the Danville region for many decades until the turn of the century, Caesars Virginia plans to retain and incorporate the “Three Sisters” smokestacks into the final casino resort.

The state’s 2020 gaming bill allows for under-construction casinos licensed by the Virginia Lottery Board to open temporary gaming spaces amid construction. That’s so long as the provisional space is at the same site where the permanent casino is being built. Hard Rock Bristol this past July made history by opening the first legal casino in Virginia.

Caesars is investing $650 million to build Caesars Virginia. The resort will feature a casino floor with 1,300 slot machines, 85 table games, 24 electronic table games, a World Series of Poker Room, and a Caesars Sportsbook.

Caesars Virginia will additionally include a 300-room hotel, a 2,500-seat theater, and 40,000 square feet of convention space. Construction of the resort is to run through next year, with the casino company targeting a grand opening of the full destination sometime in 2024.

The interim gaming spaces allow casinos to begin building their customer bases by signing up players into their rewards programs. The temporary casinos also allow for a more immediate tax stream and jobs generation for the local towns they’re designed to support.

Caesars Danville’s temporary casino will be expected to draw visitors from around the southern part of Virginia and northern North Carolina.

Since Caesars’ Danville hotel won’t be ready next summer when its temporary casino turns on its slot machines, regional hotels should benefit from the influx of visitors.

We’re hoping that the hotels that are here in our community can handle that influx of visitors,” Danville City Manager Ken Larking told WDBJ this week. “Thankfully, we have some hotels that are either newly constructed and are just now open over the past few months, plus some that are currently under construction that will be open soon.”

Once Caesars Danville is fully complete, the casino will repurpose the temporary gaming venue.