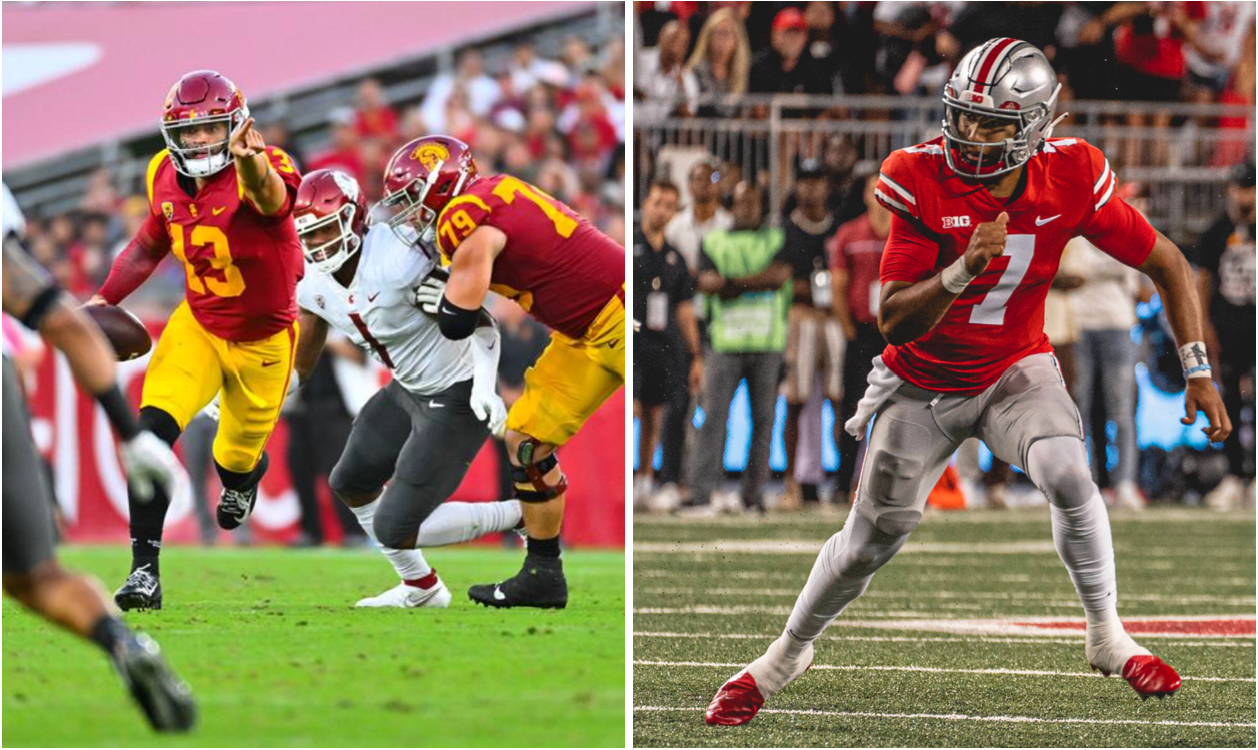 USC quarterback Caleb Williams (left image, center) is the new Heisman Trophy favorite at sportsbooks. However, Ohio State quarterback CJ Stroud (right) has the backing of more bettors at Caesars Sportsbook. They both play in big games Saturday that could decide who hoists the trophy in two weeks. (Images: John McGillen/USC Athletics and OhioStateBuckeyes.com)

Ohio State quarterback CJ Stroud has been one of the betting favorites for college football’s top individual award all season and enters Saturday’s big game as the consensus second choice at the four biggest sportsbooks behind Southern Cal quarterback Caleb Williams.

No one else has odds shorter than 10-1, meaning oddsmakers believe it’s a race between Williams and Stroud.

And the margin between the two is narrow, and a big performance by Stroud could shorten his odds once again.

Heisman odds current as of Saturday morning and are subject to change.

Both players will have the spotlight to themselves on Saturday. The Ohio State-Michigan game kicks off at noon ET on Fox to begin the daylong college football feast. USC hosts Notre Dame in a primetime affair, 7:30 pm ET, airing on ABC.

Tale of the Tape: Williams vs. Stroud

Both quarterbacks have put up some gaudy numbers through their first 11 college football games of the season.

The redshirt sophomore has also been pulled early from several games where the Buckeyes have held big leads in the second half.

Williams also has run more, carrying the ball 88 times for 316 yards and seven touchdowns, compared to Stroud’s 77 yards on 33 carries.

While Williams does have slightly lower odds, he does have a loss on his record – although the 43-42 loss at Utah on Oct. 15 was by no means a bad one as the Utes are a ranked squad and Williams played well (25-of-42 for 381 yards, 5 TDs, and no interceptions).

Still, a USC loss and an Ohio State win could very easily flip the odds back to making Stroud the favorite before next weekend’s conference championship games.

Williams became the betting favorite at Caesars on Thanksgiving, although Stroud remains the more popular pick.

Through betting on Friday afternoon, the Ohio State quarterback represents 5% of the wagers, more than anyone else on the futures board, and also leads with 14% of the handle.

The 3% of tickets for Williams makes him fourth among Caesars bettors, although his 4% of the handle is second only to Stroud.

Ballots will be sent to the 870 media members as well as the living Heisman winners on Monday. Voters will rank three candidates, with the top pick getting three points, the second pick earning two, and the third receiving one.

Ballots are due by Dec. 5, and the Heisman Trophy Trust will announce the finalists that same day.

The winner will be announced on Dec. 10 at an award show in New York broadcast by ESPN.