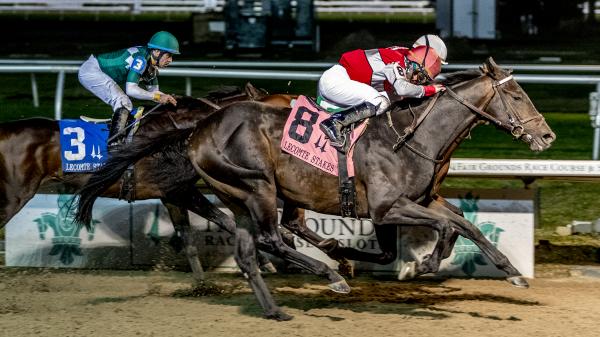 Trainer Keith Desormeaux has run horses in the Grade 1 Kentucky Derby Presented by Woodford Reserve three times, with Exaggerator finishing second in 2016, Sonneteer checking in 16th the following year, and My Boy Jack running fifth in 2018.

Now, 3 1/2 months away from this year’s Run for the Roses, he is revving up for a fourth appearance. Besides having the graded stakes-placed Oviatt Class on the Derby trail in California, he also has a legitimate prospect in Louisiana.

That 3-year-old, Peter Cantrell’s Call Me Midnight, illustrated his quality Jan. 22 at Fair Grounds Race Course & Slots by running down favorites Epicenter and Pappacap with a stretch rally in the $200,000 Grade 2 Lecomte Stakes. He got up by a head, nailing Epicenter near the wire.

The victory surprised horseplayers, who dismissed him at odds of over 28-1, but not Desormeaux, who thought enough to run him in the Grade 2 Kentucky Jockey Club Stakes at Churchill Downs Nov. 27 after a maiden victory there in his fifth start. Though that race didn’t work out how he hoped, the trainer’s confidence remained, leading him to enter in the Lecomte.

As has been the Midnight Lute colt’s custom in recent starts, he lagged behind early Saturday—racing eighth as Gun Runner Stakes winner Epicenter shot to the lead in the 1 1/16-mile race with swift fractions of :23.40, :47.01, and 1:12.16.

Once in the stretch, the race appeared a two-horse battle, with graded stakes winner Pappacap making a bid from a stalking position inside Epicenter. Epicenter turned him back but couldn’t repel Call Me Midnight, who was closing down the center of the track and found a late burst when jockey James Graham shifted to left-handed urging in the final eighth of a mile.

“The pace scenario won the race. We’re excited, but there were six horses in front of him going way too fast,” Desormeaux said in a post-race interview on TVG. “The credit goes to James Graham for being a great judge of pace.”

“It’s all feel, in my opinion, for these jockeys. Let them ride the race like it comes up. And he did a great job of judging pace.”

The Lecomte victory was the second in seven starts for Call Me Midnight, who advanced his earnings to $221,806. The Lecomte was also good for 10 qualifying points on the Road to the Kentucky Derby, while Epicenter picked up four points.

Besides breaking through with a maiden win three starts ago, Call Me Midnight also flashed promise last year with a second at Keeneland to Giant Game, who would ultimately finish third in the Grade 1 TVG Breeders’ Cup Juvenile presented by Thoroughbred Aftercare Alliance at Del Mar.

Pappacap finished one position ahead of Giant Game in the Juvenile with a runner-up finish, but away since the Nov. 5 race, he grew a bit tired Saturday in his return. The slight favorite over Epicenter at 3-2 odds, he fell short by three-quarters of a length.

Pappacap earned two points on the Road to the Kentucky Derby, leaving him tied with Epicenter as 14-point co-leaders. With a tiebreaker of having richer non-restricted stakes earnings, Pappacap officially ranks first.

Trafalgar, an even-paced fourth in the Lecomte, earned one point.

With Call Me Midnight having already won at Churchill Downs, Desormeaux can feel confident that his colt can handle the surface in the Kentucky Derby. Two of his three Derby starters have run well there, and Exaggerator, his first Derby competitor, followed the Derby with a win in the 2016 Grade 1 Preakness Stakes at Pimlico Race Course. In the final leg of the Triple Crown at Belmont Park, Exaggerator ran 11th in the Grade 1 Belmont Stakes Presented by NYRA Bets.

Bred by Hartwell Farm in Kentucky, Call Me Midnight is the first stakes winner and second black-type horse out of the First Defence mare Overseen, who previously produced the stakes-placed Bayerly Seen. All four of her foals have raced; three are winners.

Call Me Midnight went through an auction ring four times as a younger horse, selling three times, most recently during the Ocala Breeders’ Sale Company’s March 2021 Two-Year-Olds In Training Sale. There, Cantrell bought Call Me Midnight for $80,000 from the Navas Equine consignment after the colt worked a quarter-mile in :20 4/5 seconds.

Desormeaux, known for making savvy, inexpensive purchases for his clients at auction, quipped in a post-race interview with TVG of his strategy for sales success.

“I just buy horses that look like Exaggerator,” he said.